Thank you everyone for your comments on my last post. I still can't believe she is gone, but seeing her half finished cross stitch project certainly makes it real. And yes Kristen we can talk about a project of your own. Pm me on Facebook or email me at equinpilot@yahoo.com.

While Mom was gone Comrade was having issues with his mouth. The dentist had found he has a gap that will hold food. He told us to use a hose and rinse his mouth. Comrade was not totally thrilled at the prospect considering the weather was below freezing. At one point he even drooled down the gate. He seemed to resolve the issue. 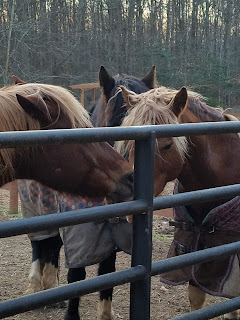 All during that episode, Comrade kept eating. He is a Cob so food is priority. So when we started seeing issues this month the differences were noticeable. This time the drool was almost nonstop and he was not eating hay. Peggy got the dentist on the schedule to come. But Comrade's condition deteriorated to the point of shaking and minor colic. So we called the vet.


The vet found he had a temperature of 101.8. He was obviously fighting something. So the vet took blood. She also looked at his mouth and did not see a huge amount of stuff in his gap. He got banamine for both the temp and the colic. Soon after he dug into his wet hay pellets and some soft grass hay. That evening his temp was down to 101.5 and in the morning it was down to 101.

During a blanket change Mom and I were appalled to see him so tucked up in his tummy and haunches. He looked horrible. No temp, but he was uncomfortable. Peggy gave him an oral dose of banamine after which he dug into food for the next three hours.

The next day the vet was coming to do a more thorough oral exam. She found three large ulcers on his tongue. She could not tell us how it happened or why he had an infection. Other than treating the ulcers, there was no other treatment advised. Salt water washes am and pm much to Comrade's delight.
When the dentist came, he did not believe the minor sharp edges were enough to cause the massive ulcers. He took pictures and video to send to three vets he knows around the country. All three individually came back and said that at some point Comrade's tongue was swollen and he chewed on it. That would explain the constant drool too.
I was really glad not to be present. This vet practice refuses to sedate for our dentist and they feel they are superior. Except that when we used them, the horses were over sedated and sore afterward. Plus they were too expensive. We certainly won't burn the bridge, but we have been looking for another vet. So when the vet asked to do a full dental on Comrade, Peggy was quick to say that the dentist would be coming in a couple of hours. Let the dual begin. The vet lectured over and over about why the dentist  was not the right way to go. Phone conversations with the dentist of course said how the vets don't do things right. Poor Peggy was the concerned owner stuck in the middle. The determination of the dentist and his persistence to find us another vet helped Peggy make the decision. Plus he left a large syringe type thing to do the salt rinses.
In the end we are just trying to find the best care for our horses without breaking the bank.

Comrade had a recheck today from the new vet and no more ulcers. He will be so sad when he does not get anymore soft hay. So will Rosemary who has diligently been stealing it from him.

Rough Month, The Power of Thank You

January is historically a month where I work a ton due to inventory and I barely see my horses. This year our schedule was lighter, so I had hope to get more barn time. Unfortunately I did not realize just how much I would get. During the biggest inventory we conduct, my uncle called to say my Memere had been examined by hospice and the news was not good. 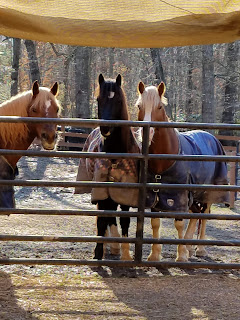 So my parents left for Florida to be with her. She had less than a month to go. My Memere is one of the strongest women I know. She has had MS for awhile, developed Crohns, but she kept going. Just before Thanksgiving, after one too many falls, she made the decision to move in with my uncle. That was the beginning of the end. My independent grandmother lost heart with the decision. My Mom got two weeks with her before she joined my grandfather to dance again. I am so glad we got to see her every year for the last decade. 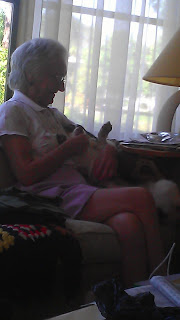 Her strength helped my sister and I get through the month my parents were gone. Weird work schedules, snow storms, reactivated UC and animal issues made for stressful times. Peggy and Larry helped where they could. I melted down more than once. Sometimes things were just too much.

Fortunately life goes on and all the animals survived. Rosemary is dealing with slight heaves thanks to all the wonderful mold we had last year. So far giving her phosphorus has helped the best. Of course she was better when the vet  came. Dottie's digestive issues have greatly improved since Mom found Succeed. And after dealing with my UC flaring since I was sick in October, it is finally improving after a course of steroids. 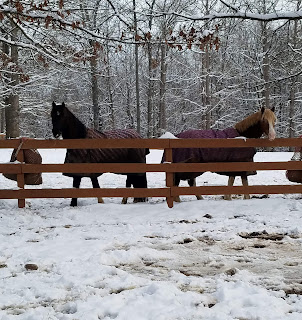 Amidst all the crazy a little envelope came in the mail. I nearly cried when I read the card. Memere always had a cross stitch project she was working on. Sometimes she made it for herself and other times she gave them away. Visiting her got me back into doing cross stitch and you all know what my sister and I do every year. The blogger gift we make is something I normally share with Memere once I finish. This time one of the last texts she sent me was to ask me why I was not with her to pull out her threads. I told her I was pulling out my own. I did not get to share the finished project with her this time. So when Amanda sent me a thank you card it reminded me why I started making them in the first place and who inspired me. As long as I cross stitch I have a link to her. 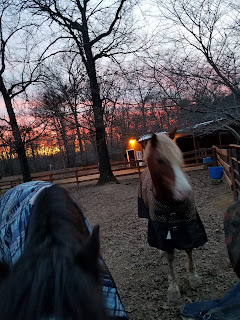 The power of thank you at just the right time can bring happiness when someone is down. Memere was also a big one for the written thank you, so Amanda you certainly showed why she did.