The downside to having a breeding stallion, lessons, shows and a full time job is the trailer is tough to schedule a checkup. We did not notice anything until the well into breeding season and the show season. So we did fixes and watched until we could get it in. Fast forward to the beginning of November. Mom and I were driving back to the barn after a saddle fitting. The roads are hilly, winding and a little narrow, but we have gone this way for four years with no issues. This time we felt a huge bump, or something that only affected the trailer. Immediately we thought it was a tire. A look around showed four tires on both the trailer and truck. Roscoe was good and we could not see anything. We moved on.

A week or so later we went to what turned out to be my final lesson with Karrigan. Along the way we found the trailer had no lights. I called our trailer place and told them the problem. Mom brought it in the next day and we hoped it was just a fuse. Which is partially was. The truck blew a fuse, but fixing that did not fix the trailer. So they told us they could not do any work on it until the first week in December. That was not good as I have a lesson scheduled for the first. But with no lights we could not go anywhere, so the trailer stayed in case they could get to it sooner.

Thankfully they got to it this week and fixed the lights. Now they needed the truck to adjust our balance system, which we said had not been acting right. When my parents dropped the truck off, they found out why our lights died. 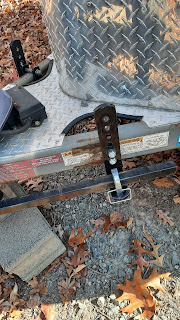 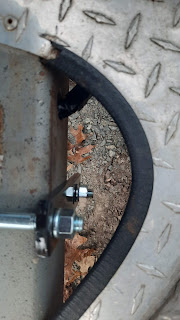 It turns out after three hours of searching for the problem, the bracket to our balance system cut the wires for the lights and the brakes. We have noticed over this year that the brackets had been slipping and it was on the list to tell the trailer people when it went in. We just tightened the bolts. It seems that all the issues we have felt with the balance system probably stem from the wires it was gradually cutting. And the big bump we felt was when the brakes locked after the wires were cut completely. The trailer literally jumped. 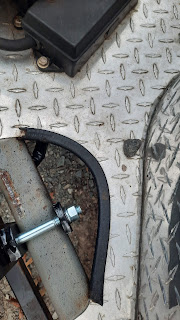 This lovely trailer issue snowballed into a big bill. You can bet we will be bringing it back right away if we see any slippage of the brackets. They will added a strip of metal if needed to hold it in place. It figures that the wires are the least protected on the tongue. What are the chances? Virginia requires an annual inspection so our trailer goes in at least once a year, but this all happened after. Hopefully now our trailer issues will be limited to little things like interior lights and the dang moonroof.

Let there be light! 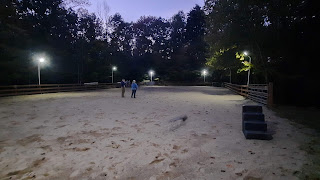 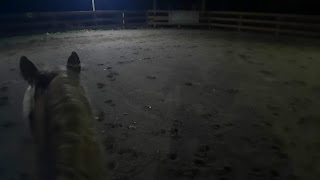 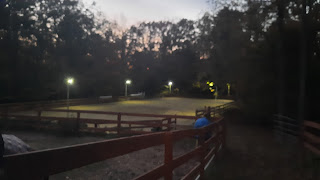 Posted by Nicole at 8:35 PM No comments:

Sadly this winter my trainer is going to Florida so I will be on my own. She was going to come back a couple of weekends but now that's not happening. Lauren Sprieser emailed and said we were stuck with her. Like that is a bad thing.

So the winter before my biggest show season will end with camp with Lauren. Although I have ridden at Sprieser for four years, I have not ridden with her. Her lesson prices are nearly double that of my trainer making it too pricey.

I am looking forward to getting her help. Sometimes a different person can say something in another way that causes a light bulb moment. She has seen Roscoe a fair amount over the last six months and may already have ideas.

My pocket book hopes we don't fall in love with her training.