Third Times The Charm...Or Not

Roscoe and I have completed two more First 1 tests after the June show. I have been working on the Foal pool prize so that is why I am so behind on my posts.

The August show I was actually feeling good, had ridden my horse prior and taken a lesson. On show day it was hot. I thought I had the right amount of warm up. Then in the ring, pony boy seemed lazy. We actually broke rhythm twice. Plus a year off has caused me to lose my comfort in the ring. My spacial sense was off. We managed a 64%.

For September I was determined to fix myself and hopefully do better. I asked to have my lesson in the outdoor dressage ring so I could start to gain my comfort back. We also put Rosemary's saddle with a bigger tree I on Roscoe. The lesson went well even though I am late most of the time on my requests to him. 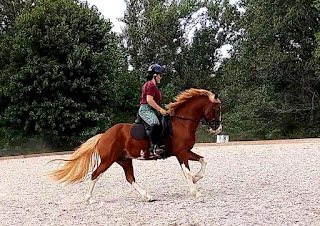 I was feeling good about the show. Roscoe was his typical idiot self the morning of, but we arrived only a little late. I planned a short warm up which was bad. Cool weather brought out the goblins. Roscoe acted like he had never been off the property. And hey, he is fitter so he can be stupid for a longer period.

As in, the whole test. He did not settle in as he normally does. And of course we rode in front of the judge who gave us the 68% in June. She knows we can do better and we ended up with a 62%. Somehow we got third in our group, fourth out of the seven first 1 tests. Not going to lie, it hurt.

So time to make shows boring again for both of us. I have two shows this month and will attempt two tests at each. My trainer wants me to do recognized shows next year to work towards getting the 2nd level scores Roscoe needs to be approved. Can't even believe that is now a possibility.