We had our first snow of the year and luckily it was just enough to cover the ground but not be too overwhelming. The drive was a bit hairy on one road that was not plowed. The ponies acted like they were starving, but we knew that Larry had given then breakfast. 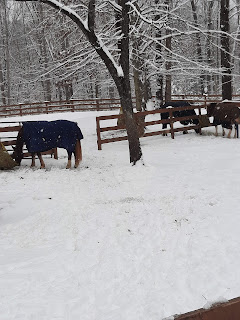 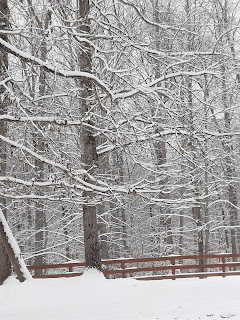 The weather was going to rain and cause ice in the afternoon so we had to leave early. I was determined to ride. Snow rides are the best. I even convinced Mom to bring Comrade for a ride too. 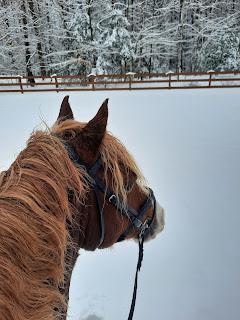 Roscoe is a serious footing snob. It takes a bit to get him to figure out he can actually work no matter the footing. He really feels insulted he has to make the effort. Today we were able to W/T/C. At the canter I dropped the contact and made him carry himself. Mom said she could see him step better behind. He is starting to figure out how to be a mature dressage pony. This was inventory month, but Roscoe and I had 14 work sessions. That would be .... 13 more than last year.

Comrade was a willing participant, but kept it very conservative. I was just glad my Mom chose to ride. 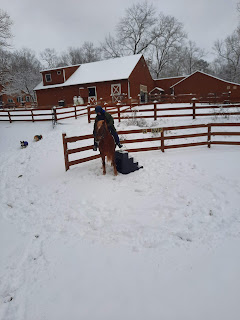 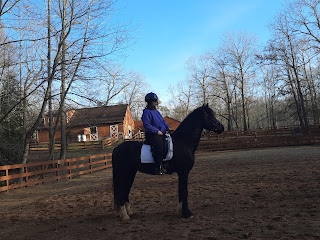 Ember and I had a ride yesterday when I used a couple hours of leave. Mom lunged him for me since I have not riden him in over a week. He was tentative due the arena beginning to become crunchy. When I got on he was much improved right from the first step. As in he walked forward from the mounting block. Ember has been a bit of a teenager and gets stuck, so forward has been a work in progress. We have been doing lots of transitions and teaching him how to be a riding pony. Today he just did some lunging in the snow. We worked on traveling straighter. He is so smart and did it well after me showing him on one side. 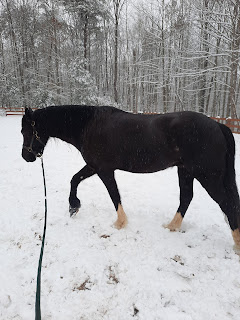 And finally the corgis had a blast in the snow. Deliah wore herself out chasing Griffyn. Four inches of snow was just enough for short corgi legs.

Posted by Nicole at 8:53 PM No comments: