I was excited this year to get Ember started. Those plans have been pushed back since I could not even think about crawling on him. Mom and I have both worked him on the line a few times. He has some really nice movement. But he also still seems to be figuring out how to use those long legs. 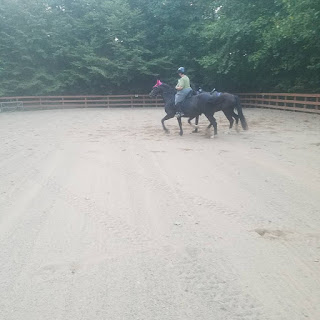 Well Saturday Roscoe got a Magna Wave tune up and I wanted to let him be fresh for Kelly. Mom headed out to ride Rosemary and I decided to bring Ember out. And for the hell of it, I put the western saddle on him and brought my helmet. He was full of it on the line and I questioned whether I would be able to get on him. Plus the big horse flies were out.

Ember did well with the distractions. When Mom finished working Rosemary, she ponied him to make sure he was tired. It took some work because Rosemary was not thrilled to have her grandson tagging along. It was so fun to watch. From the side he looks big next to her, but from the front he is half her size. 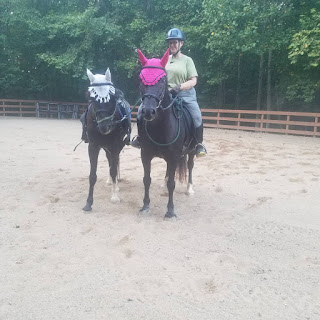 Then it was the moment of truth. Rosemary calmly stood by the fence as we brought Ember to the mounting block. Even over a year later, he had no issues with me getting on. He was more worried about being sweaty. Mom led us around with no drama. Maybe we will get him started a bit this year. I still may explore having a pro get him cantering since he is the least balanced at that gait.
We hoped to try him again on Sunday, but the horse flies were about to carry the horses away. Ember especially was seen running for the shed many times. Ah well there is time. I am so proud of him. I can't wait to see him work under saddle. We may be playing catch up after my down time, but we will get there. 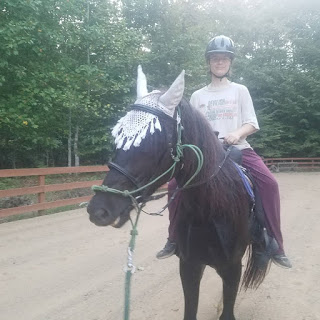 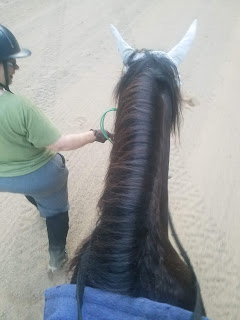