As my sister and I work madly to finish my blogger's gift, my own came in the mail today. I always have a hard time thinking of gift ideas, but one thing stuck in my head since Roscoe's inspection. I wanted a framed shot of his final inspection jump.

Aimee (sprinklerbandit) knocked it out of the park with her gift. It is so cool! Thank you!!

The picture is integrated into the material somehow and she added his registered name. Asuper way to remember that awesome final jump. 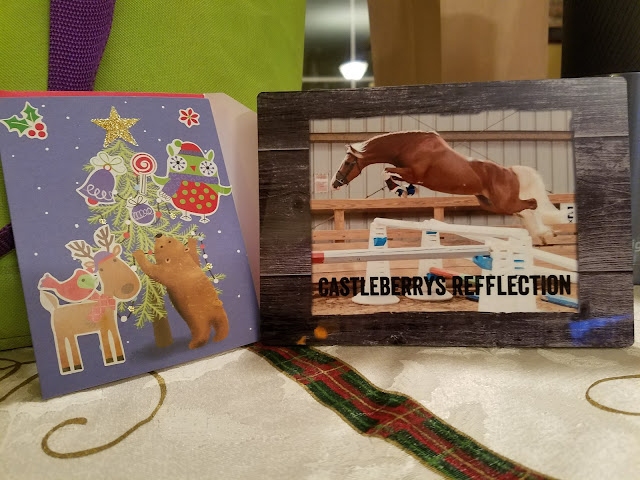 This is an update post since I have not had time to write. Some of you may have noticed that I have been NQR since my accident in September. Shortly after the accident I started having horrible GI issues and losing weight. I thought it was stress and started taking my probiotics. I was happy about the weight loss, but not the method. Unfortunately matters got worse with the appearance of blood. I finally made the decision to go to a specialist, but it took a month to get in. Then when I got in the doctor told me I needed a colonoscopy. And unless I wanted to wait until after the new year, it would be the Monday before the horse show. Prep for that is no joke. Everyone just hope that you don't have to go through it sooner than you have to.
The procedure went smoothly and it looks like I have ulcerative colitis. They put me on medicine which will hopefully put it in remission. Considering I have a family history of colon cancer and crohns, this is a somewhat better diagnosis. I had to do a ton of lab work too, which mostly came back within normal ranges except for showing inflammation in the colon.
The worst part was the day after the procedure. I went to work and had the WORST gas cramps from them putting air in my colon. It was horrible. I gave up after about six hours and went to the barn. Walking around seemed to relieve my colicky symptoms. As a horse owner I seriously should have thought about that solution sooner.
Anyway if you are tracking, all that medical stuff kept me from the saddle for five days. I had my mom get on Roscoe so he got a ride in before the show. Good thing too since it snowed the day before. Rosemary and Roscoe were doomed to show "winter grungy."
This was the Ugly Christmas Sweater show so mom bought me one to wear. I got Roscoe reindeer ears  and Rosemary wore snowflakes. The only part Roscoe protested was when we went to put his red nose on. He was totally convinced the makeup tube was the dreaded wormer. Peggy ended up having to break a piece off and rub it on his nose. He looked so cute! 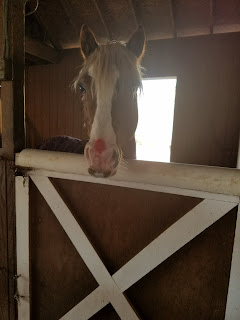 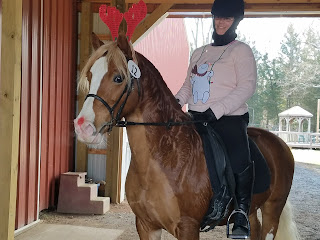 The show was cold and Roscoe was fresh and distracted. The warm up ring was outdoors right next to the round pen and a turn out field. That brought out the wild thing in my pony. He was acting like it was his first show. Only this time he is fitter and his drama was more skilled. He even Cob trotted, Holy Suspension people. I was intimidated. Mom had to talk me through while the audience looked on. We put on quite the show. Slowly, my pony found his brain and I remembered I am not a raw beginner. Good thing since show time came. The indoor did not present an issue since he had seen it during his inspection. What did cause a problem I found as I tried to circle at E, was the waterfall noise of snow melting off the roof. That caused a downhill roll for our trot circle and followed into the canter. Then he had to gawk at his audience, spook at E and then walk his diagonal. Going to the right he was a different horse. I guess horses really do have two separate brains. We finished better than we started except for a crooked halt. All considering, I was just thrilled to have been able to do the test. And bless dressage scoring, even with our spooks, he still pulled off a 64% to land in 3rd. 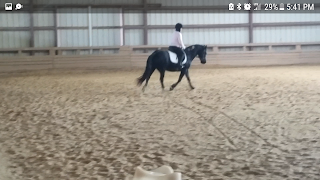 Then we had to switch to Rosemary. She had been calling in the trailer and acting silly. At the warm up she though about Cob trotting, but remembered how tough it is. So she just trotted around with her head up. I just barely had time to canter before it was time to go in to the ring. Bless Rosemary she has such a  good head on her. She settled into the indoor as I showed her both directions. I learned my lesson from Roscoe. Rosemary felt so grown up as we started our test. I was a bit lost since they shrunk the arena and the letters seemed off. Even though she called at times in the test, she was consistent. I have to work on keeping her in the outside rein and staying in the center. Shows bring out the lean in me. My phone ran out of room so her last trot was cut off. She had to end with flair. After the judge made her comments, Rosemary did a full body shake and managed to demolish her snowflakes and send them flying. I had to dismount and pick up the  sparkly bits. She pulled off a 68%, tying for 1st place.

We left before the placing so I don't have any ribbons. And as a bonus, my Christmas sweater was the judge's pick. Though the show did not go as I would have hoped, the potential was apparent. Roscoe's naughty behavior was like a vision of Christmas future. I can't wait until I can control that movement.


Next up is the January show which Lauren will be riding Roscoe at. She had her ride on him last Wednesday and will ride him twice more before the show. I was happy when she said he felt better than when she last rode him. All our hard work in November came through.
Okay I have to get back to work on my Blogger Gift so I can get in the mail soon.
Posted by Nicole at 7:25 PM 2 comments: