Camps, Thrush and Heaves Oh My

Long time, no write. It has been a "too much happening, not enough time" thing rather than nothing to write.
Back in December Sprieser posted the dates for their Camps. This year they actually teamed up with an eventer to do a combined Camp. This meant Mom and I would have to go at different times. With inventory and the wet weather, we both signed up for the March dates. Well as March got closer, we worried about Rosemary. Last year she developed heaves due to all the mold around this time of year. We managed it last year with Cough Free and holistic remedies. This year was really bad so I gave in and purchased a nebulizer. It is just a budget friendly one with a small air compressor from Big D's.  She is pretty good about getting her treatment once a day. Though she has managed to get her foot over the tube and flip the container during her impatient moments. 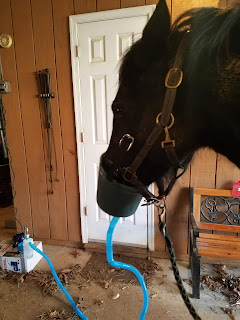 Sadly she was still belly breathing a  bit and camp would not be good for her. The stall she would be in is really dusty. So Mom made the hard decision to take Roscoe instead. She did manage a couple rides before camp and worked out some things with him. 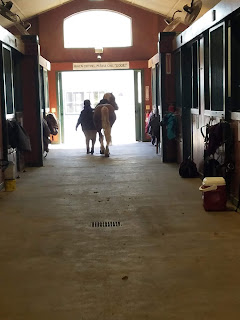 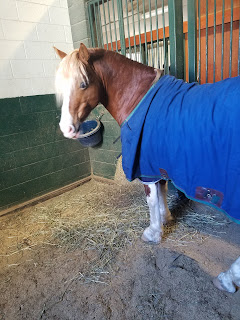 Her first ride was with the newer trainer Jess Idol. I really liked how she worked with them. Mom psyched herself out a bit about cantering, but she did some nice lateral work. Her second lesson was with Lauren doing a seat lesson. This was in the round pen. Roscoe thought the fancy gate would eat him, but he eventually settled. The fun began when Lauren pulled out the Posture Sling. They go over the shoulders and down to the opposite heel. They really seem to help keep you down and around the horse, while keeping you centered. Mom had been leaning forward a lot when asking for canter, but not with the slings. She did all three gaits and could feel a difference when they came off after only ten minutes. I looked up the slings afterward and they come in size ranges for about $130 for three tension band levels. Mom's final lesson was with Lauren on Sunday. 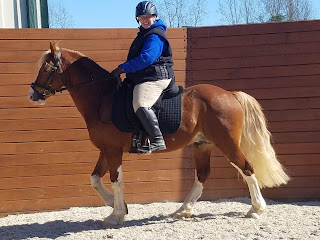 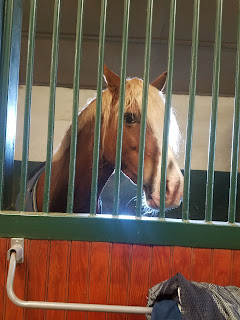 Pony boy was not happy we left him. They both did well and carried on from what they worked on in the seat lesson. Plus I told Mom to use the whip. Rosemary is a bit reactive about the whip, but Roscoe is fine with it.
As great as her camp was, we did get bad news. Lauren said they may cancel my camp due to lack of people. Turns out cornona virus had the final say, so no jumping camp for me. Instead Mom and I will go tomorrow for a lesson.
Meanwhile we have also been dealing with thrush in both of DaVinci's back feet. Thankfully Peggy had a bunch of thrush products since we have never dealt with it before. Iodine and Bannix twice a day for the first week or so. Did I mention there was a little blood and the front of his frogs were gone? Yeah it was scary. Then we moved to Iodine and Thrush buster twice a day for a week. Then down to once a day, just the Thrush Buster. As those got low, I ordered the Equiderma Thrush and White Line treatment. That stuff smells really good, lavender oil, and seems to have finished the job. My farrier looked at him yesterday and said to do a few more days. Of course as we start to see improvements in him and Rosemary, the rest of the world goes to pot.
I still have to go into work, but we can no longer do some of our jobs. It makes for a very long work day sometimes. As a DOD employee, I can't travel more than 100 miles away from work. On the plus side, since so many people are teleworking in northern VA traffic is so much more managable. I am taking advantage of the daylight to ride so light traffic is a big plus. Stay safe out there guys! We shall see how the coming days are.