After we lost Kayla, I knew we would eventually get another puppy. I also knew I needed money to be able to do that. So I posted 2 of our saddles and 1 of Peggy's, graciously given for the cause, for sale to raise money for a puppy fund. Well as you all know, Deliah came sooner rather than later. I dipped into my money cushion to help pay for her. Now I really want the saddles to sell in order to repay that money and have some for spaying the little girl. 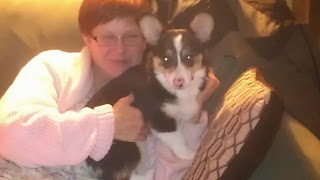 I posted the saddles on Facebook in different groups and my page. I received a few questions and even thought someone was going to buy the Wintec dressage saddle. Instead the dressage saddle ended up going to PA for a trial. I may be weird, but I like the idea of my saddle going to someone I know and like. I should hear soon whether the saddle works or not. Fingers crossed.
The other two still remain and I posted them on a local site. Again both had interest. For the Wintec all purpose I got an email from a lady asking my final price. It was listed for $300 OBO and I told her $250. It would be for her client. She agreed and sent my information on to her client to have a check cut. Included would be money to give to the person picking up the saddle. I thought that was weird, but went with it. As the conversation progressed, I asked what size tree her client wanted. I offered wide or extra wide. She answered back to leave the current one in even though I specifically stated that had to come out.
My bullshit meter began pinging. I kind of thought it was because I love the saddle and hated selling it to someone unknown. She kept telling me to let her know when I received payment so she could tell me what to do next. That put me on edge. Then I get an email saying USPS would be delivering the check. Ok, good news. I headed to work. Later I receive a text message saying to check my email and get back to her NOW. Seriously!!! So I look and the email said that USPS could not deliver since I was not there to receive it. That got my back up. I told her had I known it was signature required I would have let her know I am not home between 9am and 930pm. So now I had to go to the post office to pick it up. And it figures that the post office is 20 miles the opposite direction of the barn. I headed there while my Mom went to the barn.
I opened the envelope and got a massive surprise. The check was for $1650.22. WTF!!! Now I was freaked. I immediately told the lady I needed an explanation. She told me the extra was the amount to be paid for shipping commissions of not only my saddle but others things for her new store. Excuse me, why the heck am I paying these people instead of her. Especially when she said I would need to send it by Western Union. Plus she kept saying was proceed to the bank and deposit the check even after I said I wanted it verified. Sorry not happening.
I talked to people at work, my family and called Peggy. My bullshit meter was off the charts at this point. Beyond the amount, the check was from a bank in Rhode Island for a company in Alaska and was mailed to me from a guy in South Carolina. Everyone agreed, SCAM.
All the bad vibes were not just sellers remorse. It was still super stressful. Can't wait until all this is behind me.
So if you know anyone who wants either a 17.5 inch brown Wintec All Purpose saddle with adjustable gullet or a 17.5 inch Dressage Treeless Saddle with monoflap and velcro seat that allows for changing stirrup position let me know. 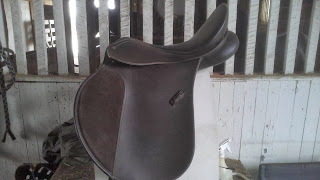 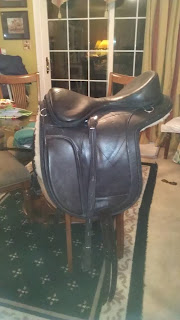 If dealing with a scam was not enough, today Dottie pulled a shoe. No big deal right? I wish. Our friend, same girl from last weekend, was riding her when it happened. Unfortunately, her tendency to lean forward in combination with Dottie's bad step caused her to fall off. Never a good thing when the rider does not get up. She was in a lot of pain and had blood on her face. Her friend ended up bringing her to the hospital. She fractured her collar bone and is out for 5 weeks. Even worse, she was scheduled to go to the Marine Corps Ball tonight. I felt so bad.
Then...this happened on my way back to the barn from Peggy's

I am so ready for the new week to begin. I can say that my two rides today were great despite everything and I am no longer sick. Counting my blessings :)