Today was the day, despite all the rain dances he did while we were in Florida. Ember underwent brain surgery today, aka he was gelded. We planned this date to be during our vacation, after the worst of the flies, not during the full moon and before the muddy winter hit.
This was a first experience for us and we had a front row seat. Poor Ember had to have no food after midnight. Peggy was nice and pulled his hay net at 1158. He was STARVING by time we came in this morning. He could not understand why he could not have breakfast. We told all the other horses they had to wait too.


The vets, yeah we got two for this procedure, showed up at 900. They decided the 20x20 run in shed would work well for the surgery. First they had to prep him. Surprisingly, they got the first sedation needle into him okay. Then things got tricky when they went to put the IV in. Ember said hell no to the big needle. The spot developed a hematoma, so they had to go to the other side of the neck. Eventually with a struggle they got it in. Now we had to move him to the shed. On the way they were going to flush his mouth to make sure his esophagi stayed clear, but Ember was not having it. Mom slipped food to everyone else.

Once in the shed, he got the first of his cocktail. When he was under enough, they gave the one to drop him. Ember did not sit like they wanted. He did his normal thing of going forward and landed in an awkward spot. Luckily, they could shift him on the pea gravel. Then we put him on his back. I ended up riding his chest for the whole procedure, holding him up and watching his front feet. One vet managed the anaesthesia and the other did the gelding. The tech was a bit green, so the scrub took a little long. They had to top off his drugs after the first crunch. Baby boy started to sweat. The vet got the second one while the other was doing it's five minutes clamped. He got topped off again as the second one was clamped. The first side clotted well and did not need additional attention. Ember felt the hole being stretched and shot up his left legs. And yep, he got more drugs. The second had oozing which required a ligature. That unfortunately was not easy with the tension Ember had on the muscle. More drugs. Ember was sweating up a storm, I was roasting and my legs were shaking. I was thrilled when they finished. Ember decided to sleep awhile.
But boy when he woke somewhat up, he was ready to go. The vet made him stay down for a bit longer. Ember still had his tongue sticking out. Even with his tongue wagging, he was determined to sit up. He did not linger long on his chest. Up he went and then he promptly peed. He could barely stand, but he was ready to run. Or wobble his way back to the barn.  Once they removed the IV and jabbed him with a tetanus, he was free. Poor bugger went right to looking for food. He looked like a foal trying to stand for the first time. Plus he peed like four more times.
We had to wait for him to wake up a bit more before feeding him. Then he ate like he had not seen food in years. We had a moment of panic when a stream of blood came. That was way more than a drop a second. I watched and thankfully it slowed. He had relaxed his arched back and probably had a pocket release. He is on stall rest today and separated from the boys for a week. We will have to work him twice a day for 15min as he heals. Bute and cold hosing are on the schedule too. He and I are both walking stiff legged. Ember will take a couple of weeks to heal completely.
The deed is done and after 7yrs we finally have our Cob gelding. It cost as much as Roscoe's phantom training, but long term it will be cheaper. Overall the experience was tough and I am glad they only go through it once. Our vets did great with the details and Ember seemed to forgive us when dinner arrived. Gotta love Cobs :)
Posted by Nicole at 11:59 PM 7 comments:

"Make My Pony Appreciate Me"

In all the craziness that is life right now, I have not really been able to talk about the new trainer. Lauren (not Sprieser, can't afford her) has come out for a few lessons. She uses similar techniques to what Natasha did, so the transition has been pretty smooth. 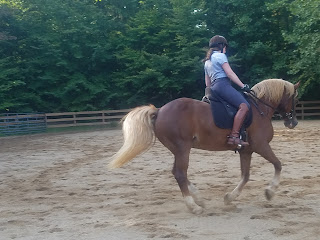 Natasha had said that we needed to start asking Roscoe to pick himself up. Roscoe says that is too much work and please keep carrying him. So when Lauren came, she brought a quiet firmness that pushed his buttons. During her part of the ride, he threw a fit. Stomping feet, head throwing, biting and rearing included. Roscoe will definitely test the boundaries. 2nd ride 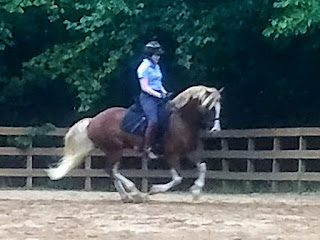 Her second ride, Roscoe was less combative. He still thinks picking up his back and stepping into canter is overrated, but at least his work ethic was improved. Lauren said she felt a difference from the previous month. The best part for me is being able to get on after her and reap the benefits. The biggest being my pony appreciates me. Before the show I had her ride and "make my pony appreciate me." Considering the show, my evil plan worked.
3rd ride 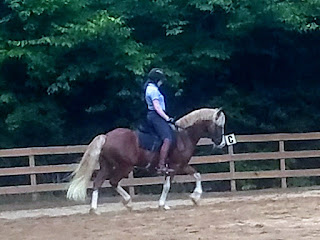 Lauren has her ways to reach the people to. Prepping for the show, she told me to ride my straight lines in a shoulder fore. Which basically straightens my crooked little man. Then she told me to use "Beyonce Hips" during my free walk. Roscoe has almost too much forward in his walk, so I had to activate using a side to side hip swing vs a forward hip roll. With help from her, I am starting to feel my green bean sprout some leaves. 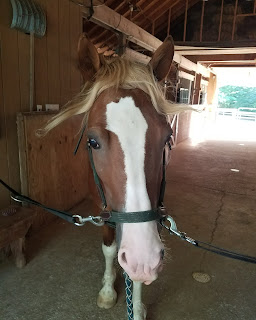 Now if only he and the others would magically appear with clips by time I get back from Florida. This heat and humidity is horrible. The last show of the summer series is the 28th. And crazy me, I am already looking at the winter series. I could not resist when I found out the shows would be at the same farm where the inspection took place only 30 minutes away.
Posted by Nicole at 8:33 PM 4 comments:

I am still playing catch up, but here are some photos from the Welsh show 9/7/17. The boys were the only Cobs, so no big surprise wins. People remembered Roscoe when he was little at this show years ago. They have watched him grow up. Now they get to see Ember. 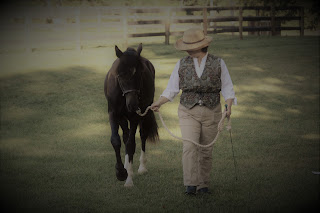 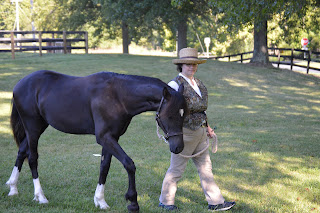 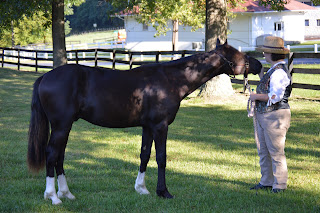 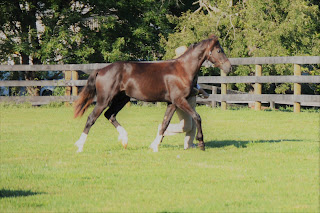 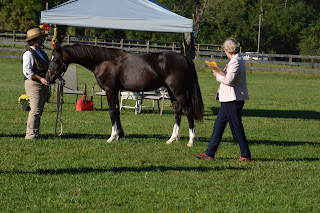 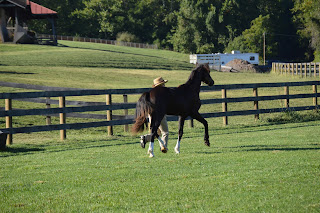 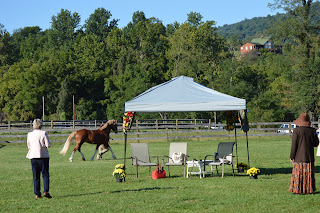 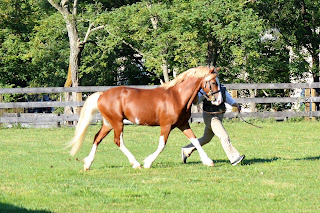 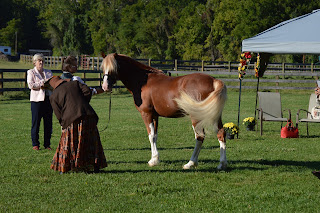 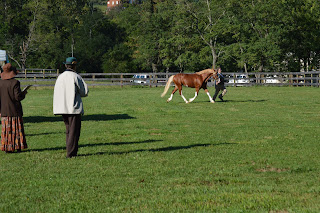 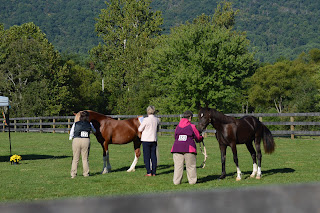 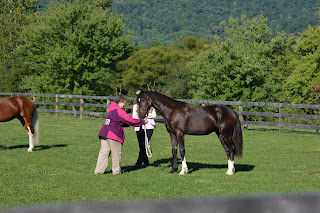 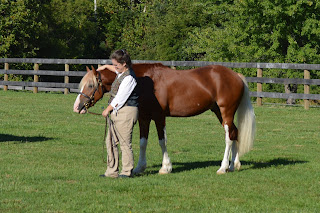 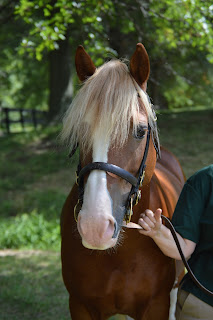 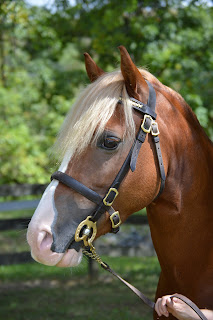 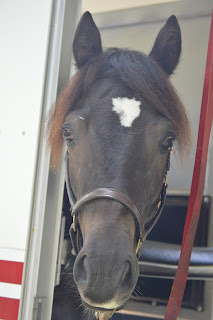 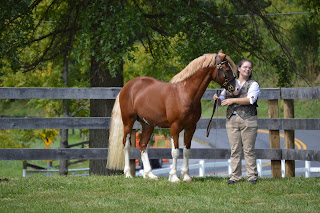