In life we have highs and lows like waves. Recently there have been a bunch of wave bottoms, so I decided to get them all out in one post. Most have following highs.

Well I mentioned after camp the repercussions were ongoing. When I rode Roscoe there was a bit more resistance than normal. Now if you have been following us for a while you know that he can object quite loudly when learning new things. As the objections increased, so did my doubts. Was I too in his face? Was I pushing too hard?

So I looked forward to my next lesson and a trainer ride. The lesson was seriously rough with tons of attitude. My trainer forgot she was going to ride, so the fun was all for me. Roscoe was throwing his head around, bucking and generally not happy. The trainer thought he needed draw reins. Those scare me, since I have seen them abused in the past. Hopefully I can use them correctly with her help. Even with all the steps backward, she still thinks we can show 1-3 and 2-1 by summer, eek!

As we drove home Mom and I thought he was also in pain. She scheduled him and DaVinci was a chiropractic adjustment the following week.

The next hit came when the saddle fitter checked my saddle. A big fat NO. The tree size will work, but the gullet narrows too much at the back. This probably caused some hard nodules to develop on both sides of his spine. Roscoe is a tough fit, short backed and wide. We went through all our Isabels and found one she was able to fit to him by way of a Mattes pad with shim pockets she filled with wool. So my Bates is for sale and I have to start saddle shopping.

Then a week after the lesson, a collection was requested for one of the mares that did not take last year. We had made and canceled so many appointments by this point we were wondering if the mare would ever be ready. Roscoe seemed ready to go and did all the expected actions…but nothing came. The vet tried different things with the phantom and mare placement, but nothing. Eventually we had to call it a no go so he would not get sore. That was an awful call to the mare owner. Luckily she had some frozen she could use for the mare. Unfortunately that cost me $70 and we did have to do a trial run before his next collection which cost me $135. Fortunately Roscoe did provide the goods. I worried since the handler was a small female and he was way quieter than he normally is in the breeding shed. I think he had to realize he was allowed to be a stallion with her. The collection was pretty dang smooth. Never thought hearing the word "ejaculating" would be such a relief. Of course a few days later heading to a requested collection, the same mare owner called to say cancel. The mare had ovulated. Ah well now we are even. 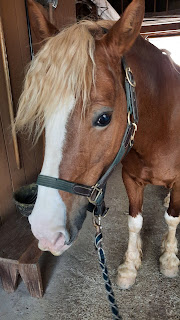 After the lesson and collection drama, we were happy to have our chiropractor come the next day. She worked Roscoe over and did find an issue with his right hind. As she had him lift and flex his back he did not want to load the right hind. Fortunately after her magic, Roscoe was so much better. That afternoon he was doing stallion stuff and we told him he was a day late. His under saddle work was night/day difference. I had my pony back. Such a relief. He got Magna Wave the next Tuesday to help lock in the chiro adjustment. He is getting more frequent Magna Wave mini sessions just in case prior to collection or lessons. 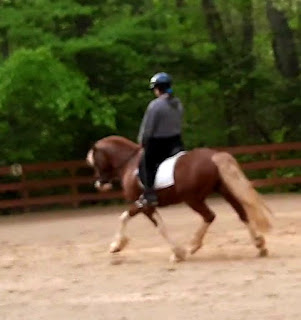 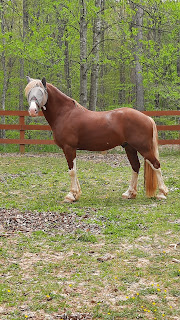 The relief of Roscoe was numbed as we brought out DaVinci. For about four months now we have noticed an instability in his gait. He cannot really stand well for me to do his shoes. He even has to walk a bit as he pees. Mom saw him fall down after missing the railroad tie. He is not well, but nothing we could point at say “there, fix that.” Our dread was confirmed by the chiro vet. Most likely he has something neurologic going on in his neck. She said a vet would not hesitate to put him down that day. We are heartbroken, but will continue palliative care. Hopefully we can see the right time before a crisis point is reached. DaVinci has been better since the adjustment and acupuncture. Way more mellow than he has been in a while. He actually could stand still and pee. He got Magna Wave this week and we could tell he enjoyed it because he stood still.

When I typed this post, I did not realize the biggest low was to come. My Dad had a heart attack. If he had done the typical male thing and waited to call 911, we would have lost him. Fortunately he did call, the rescue station is a mile from our house, the hospital about 15m, so when he coded hospital staff was there to provide resuscitation. Two visits to the cath lab, three stents and lots of stress later, he was on the mend. Three days in the hospital,  two days home and then an emergency room visit which showed additional issues, had us on edge. Now two weeks later, he is much improved. He and Griffyn have Magna Wave appointments together. They commiserate about their pain. 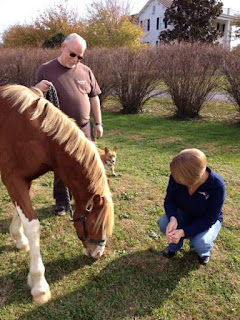 You never know what life will bring. The wave bottoms make us appreciate the highs even more. A happy post will be next, 2021 Foal Pool. 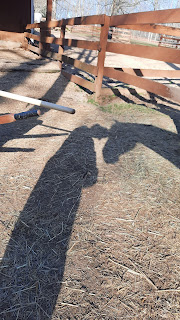 Well Griffyn has been a great sport about his injury and the multiple vet visits and treatments. He was a favorite between the vet techs. We had a balancing act between keeping him comfortable without getting him blocked up. Fortunately Magna Wave helped with pain enough to cut out the Codine.

He received Magna Wave twice a week since the initial injury and the results were amazing.The vets were extremely pleased with his progress and lack of further infection. The necrotic tissue really could have been a big problem. I wish I had the picture my Mom and sister saw at the two week mark. There was a ton of bruising and the black covered each area. I do have a picture of the three week mark and the difference was noticable. It will be at the very end, so people can choose whether or not to look at them.

And now at the five week mark, he is free from bandages. We have to put antibiotic ointment on one area until it looks more like the bottom area. Since it is uncovered our friend added light therapy to the PEMF and we could see a big difference that night.

Griffyn is much happier even with his really bad hair cut because he gets to go to the barn again. Plus since we want him and Deliah right by us, they get treats when they come.

Hopefully in a couple more weeks he will be completely healed and it will be warm enough for him not to have to wear his blanket all the time.

See below for the pictures of the big injury.

A week before the black was heavier on all areas, and the bruising was visible.