In continuation of my last post, my lesson this week followed the same theme. I was having a rough day so I opted to only ride Roscoe. Comrade got the day off and Mom got a private. Mom and Rosemary went first. Lauren and I got to try out our new viewing deck. Also we felt very high tech since Lauren brought headsets so that we could hear her easily. 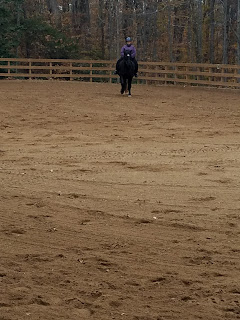 Mom and Rosemary worked transitions to get Rosemary engaged and listening. Then they moved onto shoulder fore. Rosemary is funny in that she will do the movement until a certain point before saying "I'm done, move on." They continued to blow her mind by pushing for shoulder in. Then her head really exploded when Lauren asked for half pass. Rosemary said it was hard. Lauren had Mom come about it slightly differently. On the long side she asked for haunches in. Then going across the diagonal, she again asked for haunches in. Making sure that the shoulders stayed on the diagonal. And voila, half pass! Mom said she heard the method years ago when she audited Robert Dover. Rosemary got to settle into some easier work after that. 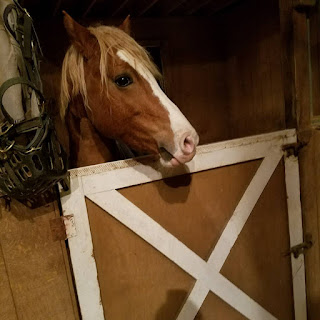 Then Roscoe and I were up. Lauren wanted me to get Roscoe to react when I asked him to move on. My poor little kicks were laughed at by Roscoe and my audience. Soon I did figure out a big kick that actually woke my pony up. Lauren did have me carry the whip because she wanted me to be able to immediately have back up if Roscoe ignored me. She said that with a lazy horse you want them to move off when you take your leg off. Translated, they learn to figure out that when the leg comes off a big kick will follow if they don't move forward :) All my thumps and bumps started to pay off as I could literally feel improvement in his trot. Plus I was not working that hard. And even better, my position improved because of it. As we continued, Roscoe's body lengthened and he did this rhythmic huff. His canter was the best yet. He lifted and pushed, then actually kept cantering without me bugging him. 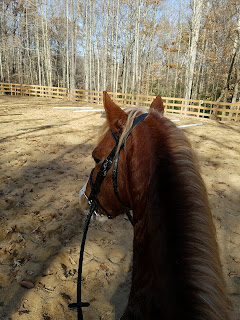 Hopefully I will have a pony who knows what leg means in no time. He has improved every ride since and he takes less 2x4's to get the point across.

Up next is a dressage show in December. It will be at the same place where his inspection was held, so we will see if he remembers. Then I start the hell of inventory at work and will hand the reins to Lauren for the January show. I am excited to see what test she decides to ride. I have only seen her doing training rides, so I can't even guess. Now I am off to work on my Blogger gift!
Posted by Nicole at 6:59 PM 1 comment:

During our lesson Roscoe enlightened me as to his thoughts about my leg asking him to do anything when a whip is not also present: 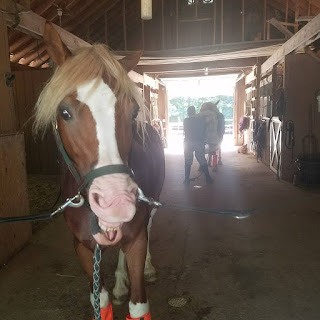 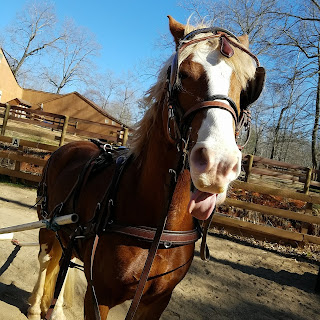 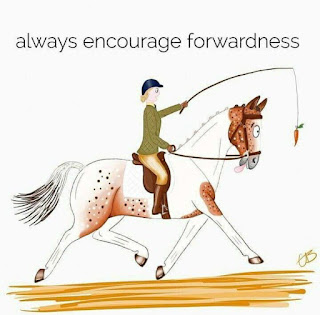 I seriously thought we were past this point, but obviously leg does not mean go. So since this is a non show month, I am doing No Whip November. Roscoe needs to know that my leg means as much as the whip. This will help our sluggish canter departs too.

I won't lie, our rides start out ugly. Roscoe gets his butt kicked when he is dull to my aids. At times I have to reach back and smack him with my hand. So far, I have not had to pick up the whip I leave on the fence. After the initial battle, he seems to believe my requests are not optional. We are no where near where I want to be, but I know we both can get there. Plus I need to remember not to wear rain boots during these sessions since I nearly lose them.

Meanwhile, we play with the ball as I catch my breath from kicking his butt. Roscoe rolls it around with my encouragement. 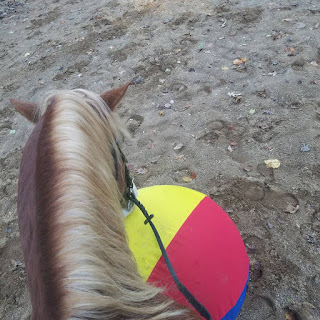 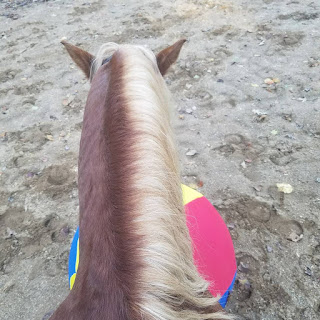 Well we learned a valuable lesson this weekend, don't have the trainer ride Comrade before a show. We had our lesson on Wednesday. I started riding him and actually  had a pretty good ride, but I have been fatigued due to some health issue, so I handed the reins to Lauren. Comrade put up an epic fight against her leg, forward is not his thing. I had no idea her ride would turn into a long, painful session. She ended up staying on him while I rode Roscoe.


So when show day dawned, we hoped he would be ready to work. I told him I would not kick his butt that hard. Both boys self loaded, super ponies, and we headed off. My farrier's wife warned us the wind was picking up and had already caused the judge's tent to fall over. Comrade was straight up sore and tight. He felt the worst he has felt in a long time. I hoped he would relax as he warmed up, but as time ticked away it was not happening. In addition to his soreness, I was tight and my outside aids were shot. I knew the test would not be our best.

We started into the ring, had a spook just before turning into A and carried on. Comrade's normally good trot work was missing. Then we picked up the left lead going right, bless him though, we corrected it on the circle. As we went left, he was slightly better. We picked up canter and I was happy about getting the shape, when we started an outward drift. Remember my awol outside aids, yep I totally failed. Next thing I knew Comrade hopped over the fence. I leaned to far inside and pushed him right out. I kept going and reentered at A, figuring to finish my test. The judge signalled I could and we ended fairly well. I was kicking myself. I wish I had pulled Comrade and just done both tests on Roscoe.

Sadly Comrade missed out on the series end awards with the windy elimination since he needed that score to qualify. Ah well, I had to refocus and get Roscoe ready.

The wind had him a bit up. He felt the need to look around more than he normally does at a show. Roscoe decided he was still on vacation and he could not remember what it meant to move in front of my leg. We worked on getting him moving. I felt better on Roscoe than I did on Comrade which says how bad Comrade was feeling. It also gave me a confidence boost. Roscoe decided to spook around the arena as we got ready to enter. Thank you wind. 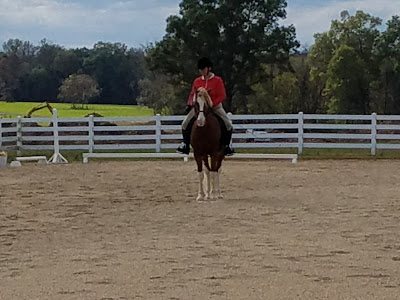 But we did at least have a better halt than last time.

He was tight in his trot, but he delivered a canter with "lovely energy." I actually felt like I was able to get the right shape on the circle. He tensed on the downward from canter and to walk. 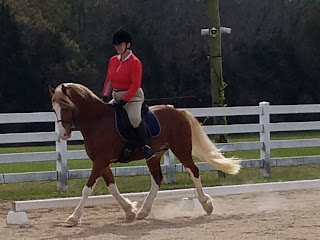 Then he our free walk was more of a coughing session. Roscoe did actively walk as he coughed. The judge wanted more stretch. 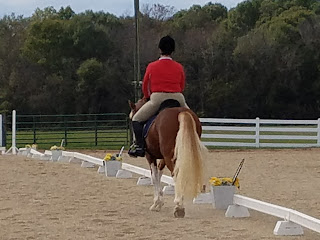 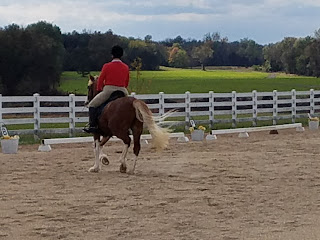 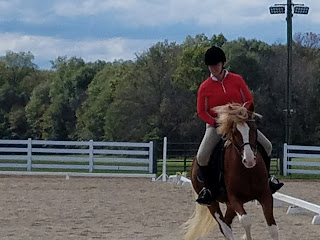 Coughing put tension in Roscoe, which was reflected in his upward transition. Things improved as his trot continued and we got a 7 on our canter circle and I finally managed to sit up and straighten him to get a 7.5 on our canter straight.

Since I put him together, my transition earned us an 8. Icing on the finish was a 9 on the final center line. Roscoe took care of me and I can't wait to be able to actually be better for him. The judge was pleased with him and scored him well, but I know we both have more to give. 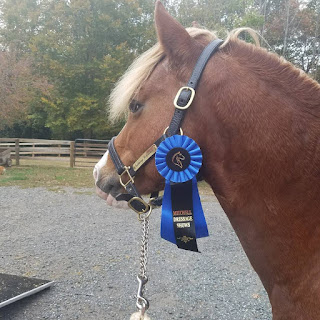 That said, Roscoe delivered this season. He improved every show and became so workman like. Though he only did three intro tests at this show, he managed to nab 3rd overall in Intro against people who have ridden the tests much more. 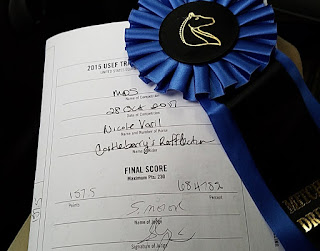 He ended the season with a 68.47% at Training 1. Mom took video, but I have not had a chance to transfer it off her phone yet. Comrade would have beat Roscoe since his scores were higher. Instead he got bute for a few days and next week he will get adjusted. Hopefully he will feel better soon. Everyone gets a break in November, then we show in December. Since the end of December begins my month of inventory, I may even have Lauren show him in January. For now we will stick to the schooling shows until I can get him sharper and in front of my aids.