Winter riding brings the need for warmth. For me my ears are one part that needs to stay warm or I am miserable. So years ago we found this headliner in the motorcycle section of our Marine Corps Exchange. 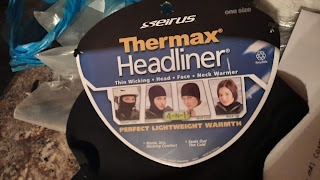 The liner is super thin, so it barely takes any room in your helmet. It is stretchy and can also be a balaclava or just a neck warmer. 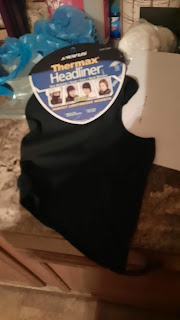 It is sleek enough to wear at a show or clinic. 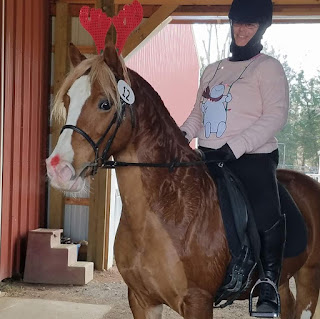 Just as many things the price has gone up over the years. It is still worth the $18 price tag.

We just gifted one to our Magna Wave practioner and she was thrilled. She has a long walk to get to her lesson and was looking at something to keep her head warm.

I will warn that it holds heat really well, so it can get very warm using it in an indoor. It is durable, mine is still in great condition.

Posted by Nicole at 9:42 AM No comments:

As you all know Lauren from She Moved To Texas, won Roscoe's 2021 foal pool. She generously donated her gift card amount to a charity. So I really wanted her cross stitch to be special.

Fortunately she has really great photos to choose from of Simon and her dogs. I ended up formatting something completely different than I had ever done. It has a level of depth and nuance I hoped would come through. I gave it to my sister to be transferred to the pattern and crossed my fingers.

Amazingly it worked out to fit all my parameters. It did need every stitch completed to make it come together, but in the end we were happy. My sister found the perfect frame quickly, a process we normally go back and forth on multiple times.

We shipped it to Lauren and surprisingly it even arrived early. She was brought to tears, but in a good way. These prizes do not come quickly, though I do try to make them worth the wait. 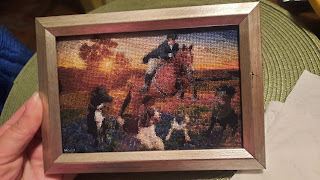 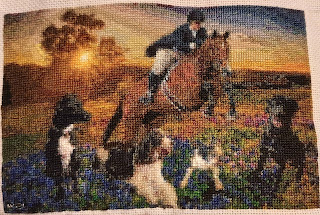 I am not sure Roscoe will have a foal due next year. It was a rough year for mare owner's. Maybe we will do a pregnancy pool instead 🤔
Posted by Nicole at 9:41 AM 5 comments:

We said goodbye to Karrigan at our last lesson as she moves with her military spouse. She definitely pushed Roscoe and I to be better and I felt she was invested in our progress. Unlike previous trainer exits, this time there is not an assistant trainer to take over. I was mildly panicked at the thought of no lessons the winter before I attempt rated shows. Enter Lauren who worked it out that I can ride with her until an assistant is hired. 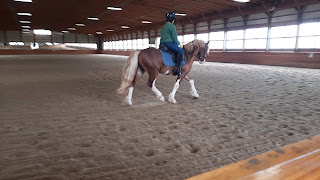 Now was nervous for a whole other reason. Which turned out to be for nothing. Lauren is a completely down to earth, tell it like it is person. I found myself calming and feeling like I could do this dressage stuff. And that transferred to Roscoe. He did not get upset or tense. 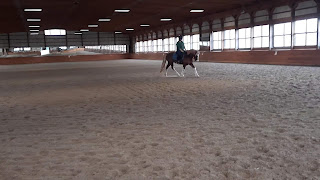 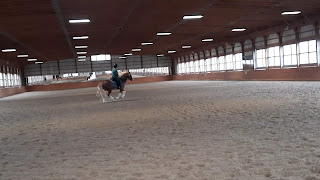 I included all the working portions of the lesson. Lauren is clearly heard, so you can get an idea of how she teaches.

The lesson was centered on the basic principle of him being "on the bit" at all times. He still fakes it or uses his under neck at times and I have not been tough enough. So after warm up she put us on a circle to begin spiraling. Left is our hard way and it was obvious. He would pop up when I gave the inside rein. But we kept asking him to lift his back, cross his legs and move forward. Slowly,  Roscoe moved differently.

When we stepped up to canter, Lauren specifically stated if he dropped down to trot it was okay. He is allowed to fail. Success is built on failure. Even if he fails the exercise, he still worked the muscles in the process. Permission to fail made for some of the best canter work we have ever done. And when he did trot, he was balanced instead of splatting. Rescuing him in the canter could result in him sacrificing quality. Roscoe definitely thought it was hard and he did not like the new transition parameters. He did try though.

My pony felt fancy! We were by no means where we need to be, but the stronger base was definitely being built. And my ride at home the next day was almost as good. So fingers crossed we can keep it and strengthen him over the winter. I can tell other movements will be easier once we firmly establish him working over his back.

Even after only one lesson, I am already thinking I will need to plan to pay the extra to take an occasional lesson with Lauren in between regular lessons with the assistant.