Mom has had more time off at the same time as me during this time. So we have taken the time to put some work into Ember. Ember has redeemed himself since the bucking bronc impression. We started by opening up the arena so he had more room. Before each ride I lunged him, with a butt strap and with side reins. It was fun to watch him figure out how to carry himself.


Then I would ride him for about ten minutes. As he has improved and become more comfortable, I have been able to put the dressage saddle on him and attach the reins to the bit. He was quick to bulge out his shoulder, which made working on turns difficult. Finally one day my Mom told me to drop my inside rein. Well Ember had nothing to pull against and he actually stopped bulging. So he will teach me to let go of the inside rein. Our turns are getting better since we figured out that trick.
The only other change we have made is we put a straight happy full cheek on his bridle instead of the three piece. He seems to be happy in it and it is a little clearer to him.

We have expanded his riding to include another horse in the ring. First we did Rosemary, who keeps him honest out in the field. Ember quickly figured out that what grandma does, does not effect what he does. He was better about her moving quicker than he was and did not try to "play." 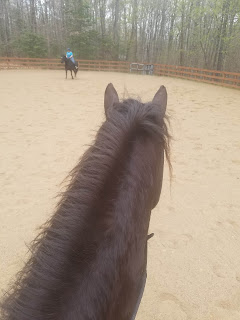 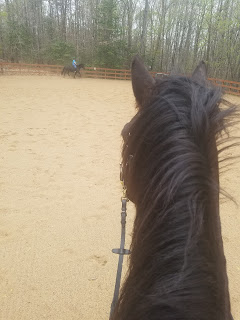 Comrade was the next to ride with Ember and that was a bit tougher for him. He really could not understand why he could not follow Comrade. Unfortunately Comrade was NQR, so we ended the ride pretty quick. 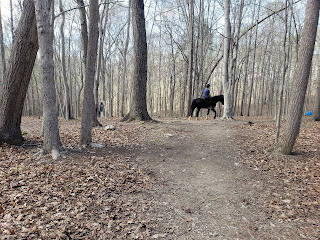 Ember has also branched out to the trail. He did a solo walk with Mom walking with us first. Surprisingly he was really brave until we came across some roots sticking up off a down tree. But he settled quickly and I hopped off while he was good. Next we followed Rosemary. Again Ember was great and having a horse did not change anything. Then we went with Comrade. Can you believe it was the 15yr old that was the problem child? Ember took the lead and did not tell me Comrade was doing anything behind us. I made sure to get off him earlier after he was really good. I looked up to see Comrade acting like he did as a 5yr old, jigging away. The closer we got to the hill leading to the barn the more wound up Comrade got. Mom had to turn him away and then we put him behind Ember so he would not pull his "buck n run" trick he used on Peggy way back.
Overall Ember has been improving with each ride. We still have not attempted canter again. I would like him to be less spooky about the jumps before I ask. Well on Tuesday he decided he would canter off down the long side. I finally stopped him after the curve of the short end. Once I got my breath back, I put him to work. We worked a little on opening and closing his trot. And I even got a little side step out of him at the walk.

So our adventures with Ember have only impressed us. He is just like Roscoe and such fun to watch grow. He is almost to the point where I can ride him alone. Not bad for the pony we thought would need a pro to start. 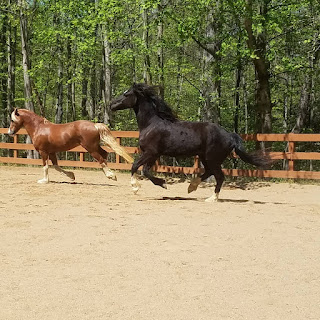 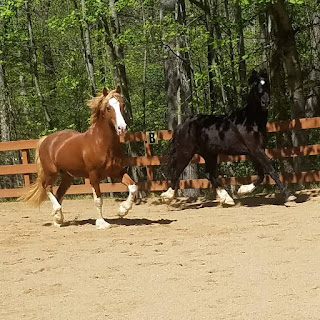 Guess what time it is??? Quarantine approved equine activity.
I waited later this year because the mares were bred late last year. Roscoe already has cute new grandsons out of Tanner and Mini Me.

So this year he has two foals expected.
First is a full sibling to Carousel, Draco and Turbo. Tawe and Roscoe produce excellent foals. What will this year bring? 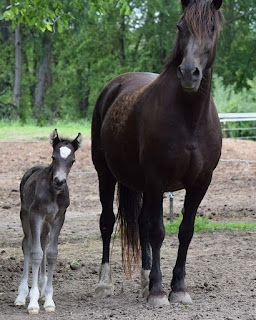 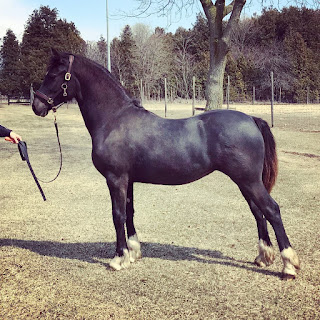 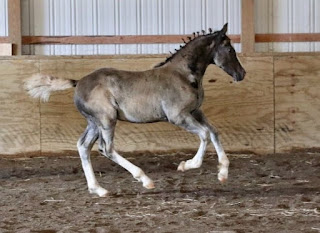 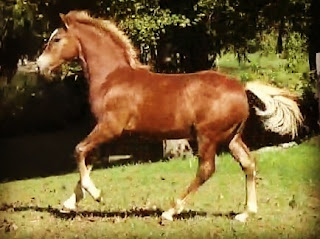 The next foal will be out of a chestnut section C mare, Chanel. We know it will be chestnut, but how much chrome? 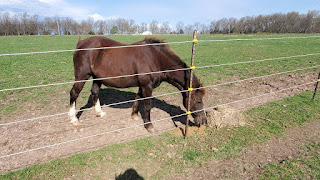 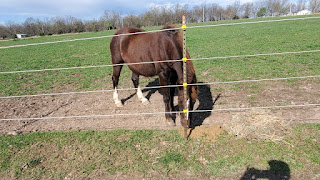 Winner of each will get a $25 RW gift card.
Overall Grand prize winner of both (points combined) will get the personalized cross stitch. 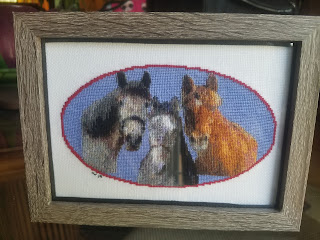 A Difference of Degrees

Well on top of all the virus fun and event cancellations, I found out my trainer was leaving. Though we have had our rocky moments, she has still moved Mom and I forward in our riding. So I signed up for two lessons the weekend my camp would have happened.
The way Sprieser is set up, I could pay online and we could go straight to the indoor limiting exposure. Rosemary was up to doing the lesson and Roscoe was hot to work. We ended up riding the whole hour and a half and taking turns. This allowed Rosemary enough breaks to catch her breath. 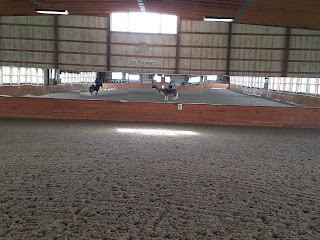 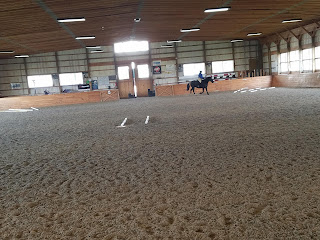 Lauren had both of us start over poles set in the corners and two in the middle. Roscoe decided the poles were going to eat him. He did eventually find his working brain. We slowed him down and put him into a longer Training level frame. When he consistently stretched over the poles, we put him together and picked him up. Man the quality of trot was amazing. He was coming through.
After a break for mom to work, we played with canter. Lauren wanted canter half halts. Last time we did this, I ran out of steam. This time we actually were able to work it. She had us do a working canter, which was bigger than I normally get at home, and then engage my core to help a half halt. Typical for Roscoe, right was better than left. His overall response was better. At times I could feel him sit and lift. He can't do it long, but what a difference. 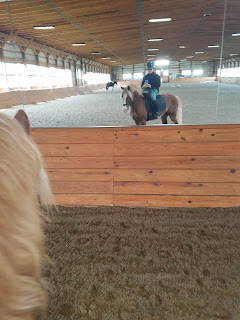 Then the fun began, leg yields. You all know I have battled these for awhile. Lauren finally seemed to hit on my problem. I keep Roscoe too straight. She had me let his shoulder lead by five degrees. This immediately unlocked his movement. So we tried three degrees, but with less fluidity. Four degrees was the best of both. We finally could move forward and sideways. Hard to believe it was only a difference of degrees preventing our success. And I was able to get the same results at home.
It really stinks to make progress and have to pause lessons. But mom and I have taken advantage of our time to move Ember forward. He will get his own post. Stay well everyone!

Posted by Nicole at 9:07 PM No comments: