A Tale of a Big, Bad Bean and Heatstroke

I have mentioned that Comrade has been not quite right for awhile now. After his adjustment by the chiropractor, he was improving, but still not normal. He did everything I asked of him and he actually did the work fairly well. There was just something about how he was moving that was off. I feared we were going backwards, because he was not picking up his right lead. We gave him rest, we worked him, but nothing seemed to fix him. 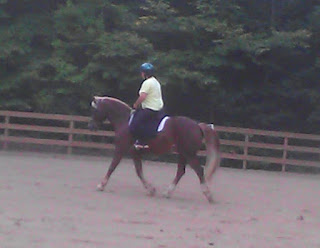 In addition to the riding issues, we also noticed he was standing parked out while he ate hay in the turn out. And not just once, I am talking every time we looked he was parked. What the heck could be wrong with him? One day Peggy said "Hmm, maybe I should clean his sheath." Comrade is a very greasy horse, who always gets ear wax and definitely build up in his sheath, so it was a sound idea. A look online showed that it could cause some of his weird actions. Peggy armed with KY jelly began the task. Soon Comrade was using his hind leg to gently push her hand away. Mom had to hold his front leg so that Peggy could tackle a big, bad bean. I guess having a bean that big would cause some issues. 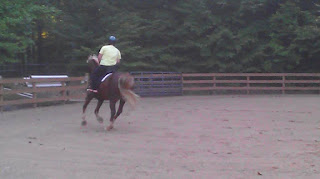 With the removal of the bean, he was standing more square. Peggy wanted to see how he was under saddle, but that took me a day. When I finally rode him, he was so much better. And he found his right lead canter. Now I need to get him back in shape. Peggy did manage to get some pictures too. 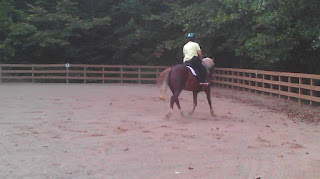 Happy with the thought of Comrade feeling better, I set to work with my parents receiving a load of hay the next day. This was a bit of a challenge since half the loft was filled with the old pony candy hay. Mom and I went up there to work some hay stacking puzzles. 140 bales, some hay climbing and successful stacking later we made the best use of the space we had. As I finished, I kept seeing flashes of lights in my eyes. Weird. I drank some water and hosed off some of the hay. It was warm but nothing that worried me. Peggy had breakfast waiting, so we all headed in for the meal.


My head started to pound while I ate. I drank more water and back in the barn I took some medicine. I felt horrible watching Mom clean up the hay, but nausea kept me rooted. I feared I was getting sick. Both my Mom and sister had caught a nasty bug recently. Eventually I went into the tack room and rested with the ceiling fan blowing. An hour later, I knew it was most likely heatstroke. The loft had no air movement and since I did the top layers, the heat hit me hard. As I cooled, the nausea passed. I decided to go home with my Dad, knowing I had to be careful not to overheat again. Peggy laughed the next day and said that now I know what she deals with. I told her I could do without the personal demonstration.

Next time I will know to be more careful working in that loft. I can't afford to miss these great riding days. I will say I did manage a night ride on Comrade the next day.
Posted by Nicole at 7:12 PM 8 comments:

Yesterday we set up some cones in the turn out to act as driving gates. The trees were also gates. Rosemary had to warm up and get use to driving up and down the hill, but soon she was cruising. It was a blast. Mom went first, then me and finally Peggy, who had eye surgery and should not be doing stuff like this, could not resist and took a turn. The hardest part was staying on the seat. We need a footrest for our short legs. I guess there is a reason the drivers are buckled in during the marathon part of a CDE. Here are the videos of some of our drives.

Rosemary just got better as we went along. I think she really enjoyed the challenge. For Eventers, this is kind of the stadium equivalent in driving. Too bad Combined Driving is soooo expensive, I could really get into it. 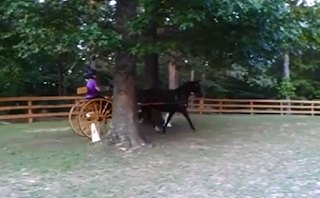 Bend Through the Body, Say What?

Okay so my follow up to the teaser took a lot longer than expected. That's because I WAS RIDING :) We finally got some cooler weather and I took full advantage of it by getting 7 rides in five days. So I will share the pictures I took over Labor Day weekend while I share some about the rides. 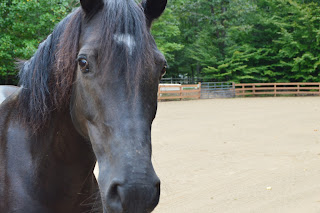 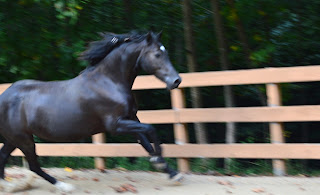 First up to face the camera was Rosemary. The big news for her is that she has finished her sarcoid treatment. We have not seen any changes in quite awhile and consulted with the holistic vet. She said we could stop and if it is needed we can call and start up the treatment again. That is definitely a relief to the wallet. Rosemary, during her ride, likes to travel bent to the right. 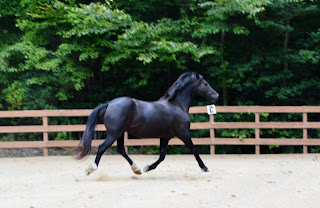 We ended up doing a ton of left circles to show her that she can actually travel straight or gasp even bent left. It will be a long road to build the muscle memory to replace what she has developed over eight years. Luckily she seems to know the right answer when I put inside leg on, she bends through her body and reaches with her head. 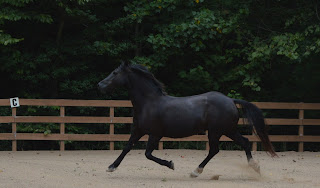 Rosemary of course has to add her own spice and state her opinion. Her rides are never boring. 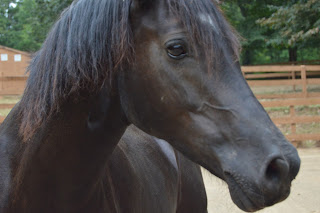 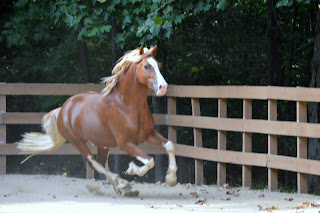 Like Mother, like Son. Roscoe was up next in the arena. While his photo session was a bit more involved to include some attempted free jumping, his rides were similar to his mothers. He too likes to travel to the right. Unlike his mother, he needed more than just my leg saying move your belly over. Say What??? So I brought out my little friends, baby spurs. They worked like magic. 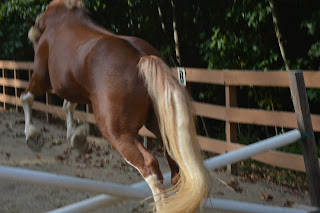 Turn my foot, engage the spur and Roscoe lifted his left side while bending. Like his mother, once he did bend through the body he also softened his neck and reached forward. During each of the three rides, he was quicker to respond to my leg and needed less spur. I am happy with the direction he is moving and so is my very tired left leg. 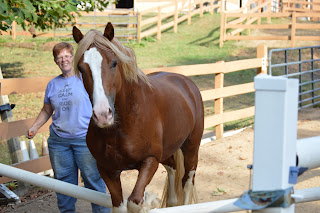 After two of the rides we went for a walk in the woods to cool out. I like to dismount and let them relax about half way through. Roscoe walked over to the barrels during both walks. I called him and the first day he found a way to go around. 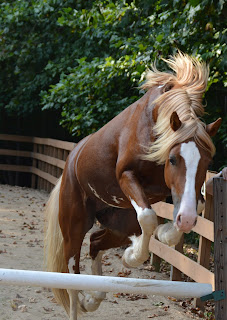 So I moved to the other side of the jump. Eventually after he found a way around a few times I figured he was too tired and went to walk away. 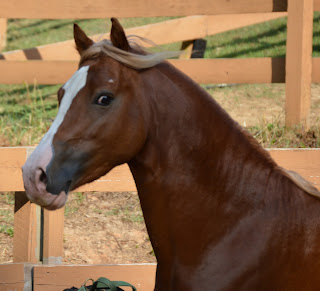 Roscoe went back to the barrels, so I called him again and this time he jumped over. Today he went right over there and when I called he walked around to the uphill side and jumped right over. But he was not done yet, he said he needed to do it again. Seriously this pony is so fun. 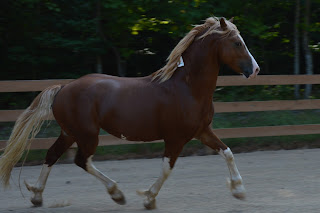 Another fun pony is Winston.  He and I have had two awesome rides. The first we did intervals, to include a few canter laps. Of course for an Arab, he felt that was a great warm up. Our next ride I wanted him to keep his gaits controlled. We did a pseudo dressage test, which turned out not too bad. 'Then we did halt to trot transitions. He kept his head and waited for me to cue him. So I upped the challenge by asking for a walk to canter. It was more walk, two trot strides and then canter, but the quality was there. I swear he rounded up and lifted right under me. That was something to feel. 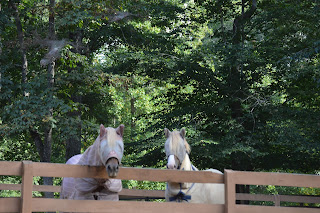 Not to be forgotten, Comrade had two rides too recently. He is still not quite right, but gave some great effort. Anyone who did not know him probably would not know he had an issue. 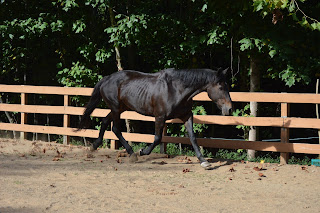 My last photo shoot was with Dottie. I had Mom come and help thinking Dottie would be tough to get moving. Surprisingly, we released her and clicked and off she went trotting around the arena. Mom had her move on a bit and she did open up. 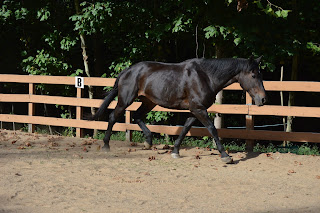 Then she even cantered. 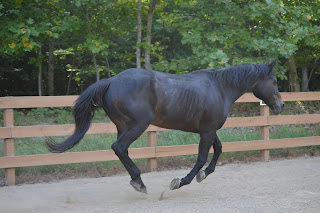 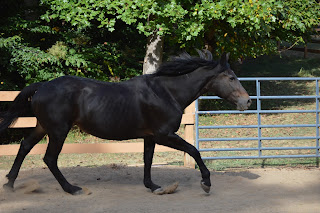 Mom and I started to worry about getting her to stop. If we stood in front of her, she just went around continuing to cruise. 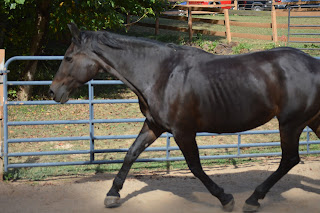 The big girl was on a roll. It took a carrot breaking to break her stride. Dottie can still surprise us. You have to watch those quiet ones. 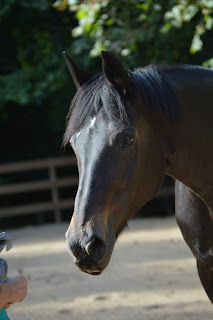 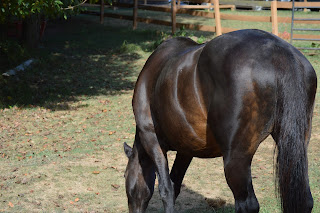 It is crazy how quickly time gets away. I worked so much in 9 days, I was able to take a Friday off and have a four day weekend. Here is a tease of what I did for three of those four days. More to come later! 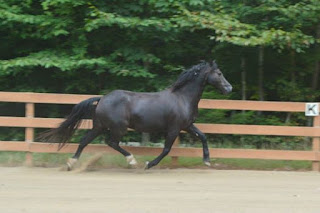 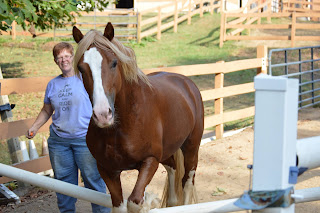 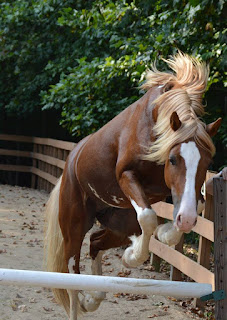 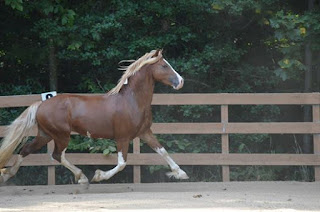