In Her Own Time, Tawe's New Colt

On the 14th Tawe's milk pH showed she was not ready to foal. Some people even said she probably had a week.

Well instead at about 330am , Tawe's preferred time, on the 16th she decided it was time. Her breeder missed the birth. I checked my phone as soon as I woke up, but no message. As I was leaving the house Mom said there was a notification on Facebook about the birth.

Tawe has a new colt! He is black with a star and stripe and snip,  two front socks and two rear stockings. Is he not a cute boy?

This was another close foal pool. The winner is Liz! Send me an email at equinpilot@yahoo.com so I can send your RW gift card.

And the damn close RW gift card goes to Teresa who was only a day off.

The grand prize cross stitch goes to Teresa! She scored 39 points between the two pools to take the overall win. Let me know if your email is still the same. 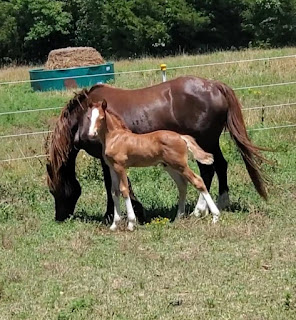 Fingers crossed that some recent breedings result in some pregnancies and we will have another pool next year.
Posted by Nicole at 9:48 PM 4 comments:

I am finally recovering from my downturn after Rosemary. It is amazing how weak you can feel after not being able to eat. But there are things that only I can do at the barn, including trimming feet. All the cobs were due, so I divided them between the days. First up was Roscoe.
I had two pairs of Rosemary's shoes that are too big for DaVinci. I made the decision to see if they would work for Roscoe. He has great feet, but he is a wimp about the rocks. He also has some really round feet which required me to open the shoes enough to accomodate. Bless my pony, he stood in the cross ties while I had to tweak the shoes over and over. I slipped once and hit my thumb holding the shoe. Thankfully I did not cripple myself and could finish the job. This was the first time I had done the intial shaping of the shoes all by myself. My farrier helped me start Rosemary.


Then came the fun part of nailing the shoe. I held my breath to see how Roscoe would be. I loved Rosemary dearly, but she did not appreciate her shoes and made it difficult to nail. Roscoe on the other hand acted like he had been shod his whole life. I always feel more confident once the toe nails are in and the shoe is set in place. The other nails tend to be easier. Another first for Roscoe and I, and another success. He is literally filling his mother's shoes, and rocking some new dancing shoes.
Sadly, I nearly cried as I walked him out of the barn to turn out. Dottie started calling, because the only one besides her and DaVinci to clip clop was Rosemary. She is still grieving and I really wish she had the chance to say goodbye. Mares can be so tight.

I finally managed to crawl on Roscoe this week to see how he felt with the shoes. He does not seem effected by the shoe weight and his movement is not changed. He is much more comfortable walking on the rocks, so I am happy I made the choice. 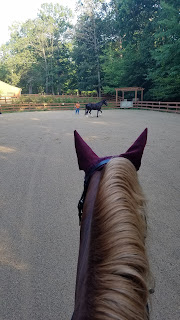 And I did get the other two trimmed. Three down, three to go. Now let's see if I can handle the vintage guys. My farrier retired and they are on my to do list. He helped by changing Dottie's shoes to the same kind everyone else wears. If we could get a break from the heat that would help a lot.

Meanwhile baby #10 is filling out really well and is really fun to watch. Here is KML Mischief Managed: 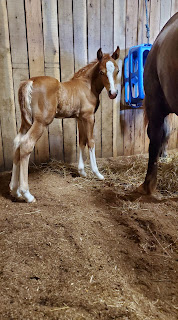 Watch this to see his opinion about wearing a halter. He also tried to roll to get it off. The wait is on to see what Tawe will have.
Posted by Nicole at 8:33 PM 2 comments: