Except for days involving vet visits and frozen ground, I have been riding each day I am at the barn. Roscoe has worked 3 days this week with some ups and downs. His transitions continue to be tough. I have to be mean for the first few before he finally picks up trot when I ask with just leg. Then about half way through the ride, he will get sticky again. I really hope this phase passes.
The other issue is that I can't seem to have even contact when we track left. My outside rein is inconsistent and Roscoe bulges his shoulder. I can get him to step over and fill the rein for a stride or so then it is gone. Getting him to lift and move his shoulders takes an act of Congress. I played around with working on myself which helped a little. I think I have a tendency to put my right shoulder forward, so I worked to roll it backwards every few strides. Plus I tried to keep my eyes to the outside. It actually seemed to help, if only for a short time.
Now I need to figure out how to help Roscoe. Anyone have any ideas? 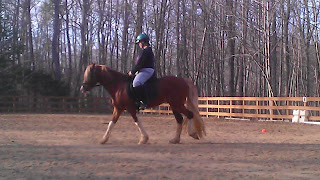 On a cool side note, a study was done to test the effect of hay bags on rate and amount of hay consumed by adult horses. I was pleased to see that the study reflected what we have seen: our horses have hay for a longer period of time, but at lower quantities while using the 1" hay nets. For seven horses, we use between 20 and 23 bales a week. That is down from the 30 plus bales we used to feed. 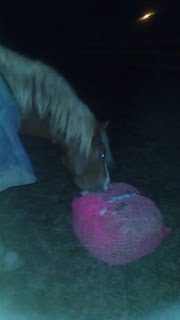 And the foal pools are open until April, so get your guesses ready.
Posted by Nicole at 11:11 PM 2 comments:

Ah, can you believe it is less than 3 months till Roscoe is a father? So, it is time to kick off the foal pools.
Lets Meet the Cast:

Prizes:
Each Foal Pool winner, $20.00 Gift Card to the store of your choice


Email your entries to equinpilot@yahoo.com and share on your blog. Entries accepted until 1 April.

The basic's:
Guess the birth date
Guess the gender

Coat Color for Rosina and Ebony's
Posted by Nicole at 10:55 PM 5 comments:

Sunday dawned to start a crazy day. We had hay being delivered in the morning in addition to packing the trailer and getting the pony ready for Mom's spur of the moment lesson. Fortunately, Winston's eyes were 95% better. Such a relief. Unfortunately, our hay guy had to buy different hay since he ran out. The hay he got is pretty stocky and my horses are protesting. Sorry ponies you have 170 bales of it and it won't eat itself.
Once the barn was full of hay, it was time to get the trailer set and brush the muddy girl. She knew something was up, so she was full of it. I stayed out of the way and let Mom and Peggy deal with the loading. We did manage to load and go by 1215. We also managed to drive by our exit causing an additional 12 mile turnaround, but we made it to the Meadow Event Park. The facility was pretty nice with lots of room and three arenas. The arena for the lessons was a large covered one with bleachers.
We all froze watching a few of the earlier people drive and enjoy Andy's humor. The lady just before Mom was a little hard of hearing and some people were telling Andy that. He said "HUH", then "What?" as they tried again to explain. Peggy and I burst out laughing knowing what he was doing. Of course we got caught up watching and ran late getting Mom into the arena.
Rosemary came off the trailer and into harness. She went right into the arena and only spooked a bit when they shut the gate right behind her. 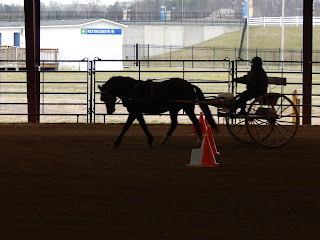 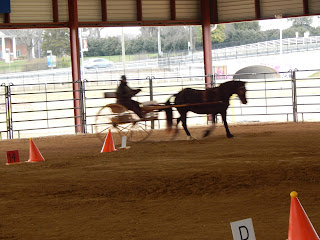 Rosemary liked to see all the people watching her from the sideline. I could tell Mom was really nervous because she was tight in her hands.

The tension showed itself when Andy asked Mom to start the cones course, which was really challenging. 2 to 3 was a tight left turn that rattled Mom and caused Rosemary to fight the bit. I felt bad for Mom, but you know the best time for bad things to happen are when you have an experienced eye nearby. 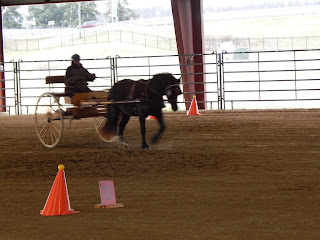 Andy called a halt to the course soon after. Then he went to work taking off the green chest fuzzy. Peggy joked that he had not gotten to the zip ties yet. OMG, the crowd let out a disgusted "ZIP TIES" cry. Just joking. Andy walked over and threw the fleece in the trash. He said the harness fit great so it was not needed and would probably cause a rub instead. We all were happy he did not adjust her harness settings which we had seen him do to others. Whew! Then he took the reins after commenting about her Rose clip. Andy started out with the Coachman's Position holding the reins.


It is one of the left handed driving positions. Rosemary knew she was not getting away with anything while he was in control. Cue the head tossing and foot stomping.

Andy was great about using the word "STOP" when she was acting out and praising when she was behaving. I am not sure when he did, but he switched from that rein position to the Hungarian. Very subtle method.
Andy decided Rosemary hated her bit to the blackest part of her heart. Yes, he has a way with words. He tried raising the bit, but that was worse so he reset and soldiered on. At one point we worried she was too bad to continue. Andy just kept working though. 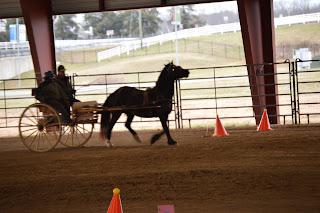 Mom said that when Rosemary flipped her tail at him, he quietly said "F you too." Andy was amazing at reading her. As they continued to work he stressed looking ahead and planning. He knew that at one point in the arena she inverted and at another she stretched. So he softened before she normally would invert and picked up the contact before her stretch. Soon Rosemary was carrying herself more regularly and with less resistance despite her hated bit.

Unfortunately, I got video, but no sound since when I did that video of Roscoe I turned off the mic. I am sooooo disappointed. You can still see her progression though you miss out on the great commentary. 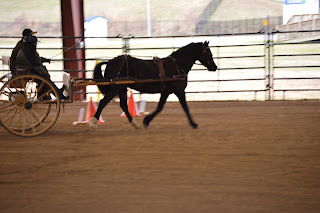 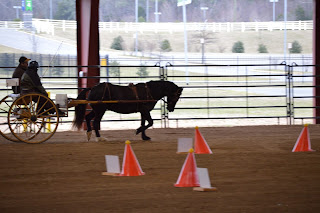 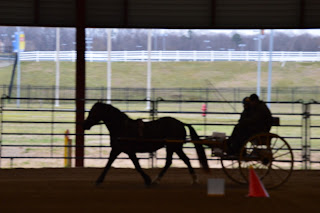 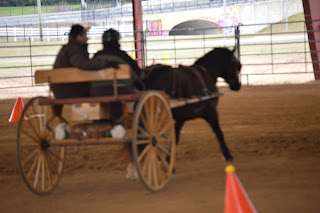 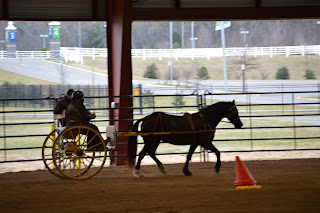 Andy had Mom put her hand over his, so she could feel how little he did to direct Rosemary. We are talking moving fingers an inch or so forward and back. Rosemary was great about maintaining her trot. When she halted, she stood still. As an owner, I was really proud of her. She worked on the circle and settled into working with Andy.

After nearly 40 minutes, Andy said to unhook her and end on a good note. He said he hoped she went far. He fondly described her as Nitroglycerin, Mexican Jumping beans. Sensitive, and quick. I like to think he had fun with her. Andy certainly handled her personality great. Considering we paid nothing for this class, we gained so much. As a green horse, any superior training she gets goes so far with Rosemary.

So if you ever have a chance to audit or participate in a clinic with Andy Marcoux, do it. What he teaches translates into ridden work too. His website Coachmans' Delight often offers online classes which we have taken before. Love his style and humor. I was so hyped after this lesson, I crashed that night. Hence why it has taken so long to write this post.
Peggy later found out that this rider, driver, ski and sky diving instructor is an amputee. He definitely does not let anything hold him back. An example we can all follow.
Posted by Nicole at 8:53 PM 2 comments:

Not So Special An Event

Well I hit my first road block in my ride every time I am out at the barn. Winston has been having issues with his eyes off and on for a few weeks. They puff up and get teary, we put ointment in and they clear up. Today he showed up with nearly two eyes completely closed. I attempted to put ointment in, but the tears were washing it away. 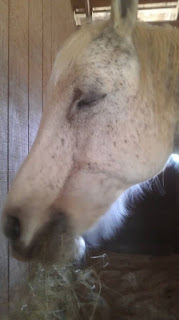 I waited to see how he looked later. Dottie and DaVinci got new shoes, I dropped hay, filled hay nets and water. Winston came into the stall with his knees wet from rubbing his eyes. He looked miserable. I finally called the vet. She called back and I explained the situation. 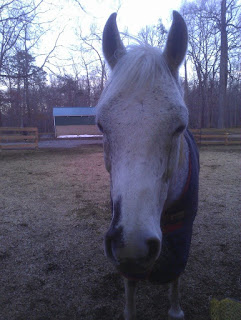 The vet figures it is allergies since all his tears are clear. She advised giving him bute to help with the swelling and an off brand zyrtec. I saved on a farm call, but still ended up meeting the vet 30 min away to get more eye ointment. Then since I was near by, I went to Costco to get the allergy medicine. That was a mistake, this being Superball weekend. I spent twenty minutes in line to buy my one item. Just under two hours later, I made it back to the barn. And there went my ride time...sigh.
Fingers crossed Winston looks better tomorrow, so the vet does not have to visit Monday.

Meanwhile, a real special event will happen tomorrow. During my day's drama, Mom and Peggy were attending a winter clinic for the James River Driving Association. An awesome guy was giving a course on whip handling and cones courses. We have taken some of his online courses and he is a great teacher. About the time I got back to the barn, Mom sent me a text saying she signed up for the cones driving the next day. WHAT!!! That means we have to get the trailer out, hopefully. Well it turns out someone else who paid for the session, gave away the spot for free. So Rosemary and Mom will have an adventure and I am prepping my cameras.
Posted by Nicole at 10:53 PM 3 comments:

Email ThisBlogThis!Share to TwitterShare to FacebookShare to Pinterest
Labels: Winston

February 3rd brought the end of inventory, so I can finally get back to a more normal schedule.

I have a few goals:
1. Ride or work in hand a horse each time I am at the barn barring weather or special events. 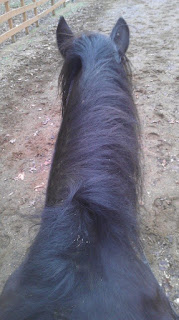 2. Work on my fitness. Starting with walking on the treadclimber.

3. Drive Rosemary at a show.

I know these are basic, but I need some reasonable expectations. 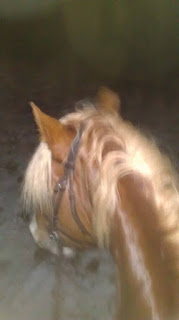 Roscoe started the process with a ride in the snowy arena. He gave a baby buck to let me know he did not appreciate the 4 inches of extra work laid on the sand. 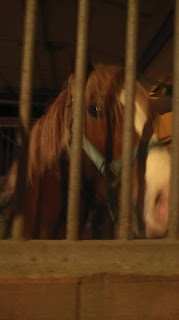 Then he smoothed out and set to work. Afterwards he stood in the aisle eating out of DaVinci's morning hay bucket while I filled hay nets. Such a good boy. 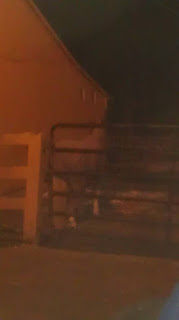 The next night Roscoe said it was Comrade's turn. Comrade shared Roscoe's opinon of the snow, but gave a decent ride. 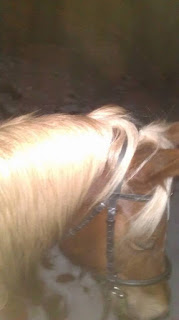 And today Roscoe and Rosemary had rides in the now snow free arena. In daylight too. 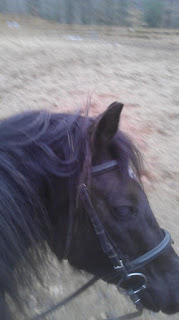