So much has happened, but I have been too run down to write it up. Hopefully after today when I, finally, take my new medicine I will get back on track.
On Monday I received word that Tawe had foaled  a Colt! 3.0 decided to be different from his siblings and he is chestnut. He has a blaze and at least three socks. He rivals Ember for being the least blingy Roscoe baby. But born the same day, Roscoe's first grandson by Mini Me is very blingy. 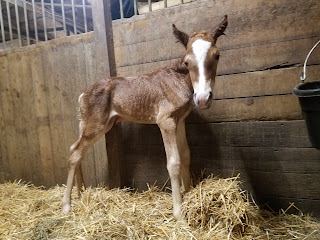 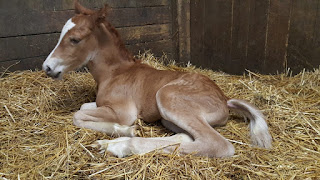 He is pretty full of it. Most of the time I look at the camera feed, he is zooming around the stall. Only once did I catch him sleeping and he popped up right after. Tawe will have fun with this guy. Pretty sure 3.0 will be for sale but I don't have the official word.

Congrats to Genny for winning the Pool and the Damn Close award! She was only off by a day and two socks. Send me an email, equinpilot@yahoo.com, and I will get your card ordered.
Posted by Nicole at 10:09 AM 5 comments:

Handing Over The Reins

With a heat wave and the continued lack of medicine, I have been unable to ride. It kills me to see my pony losing fitness. I am watching my pennies untill I know what the new medicine will cost me, which means I can't pay for trainer rides.
Well during my PEMF therapy, the therapist offered her girls to help around the barn. So yesterday I mentioned them riding my guys. They ride hunter and are really tall so I did not know what to expect. Within twenty minutes of her texting her daughters, they showed up. Unfortunately, the message did not come across for both to ride so only one was dressed.
I  let her do the grooming while I did some chores. Roscoe was super. I put the jump saddle on him, told him "no jumps today" and handed over the reins. Luckily my short person stirrup leathers went long enough for her. She normally rides her 16h mare,  but she seemed to handle the size difference well. Plus she did not look too big on him. 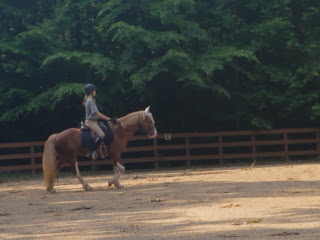 I stayed quiet while she got to know him. Handing over the reins to a junior is like giving them keys to a car. You may totally trust the car but you cannot begin to control the outside influences. As they walked around with no incidents, I began to relax. 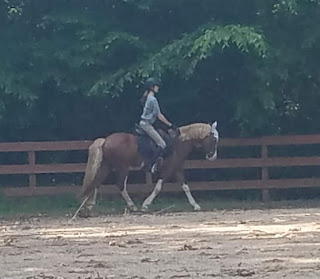 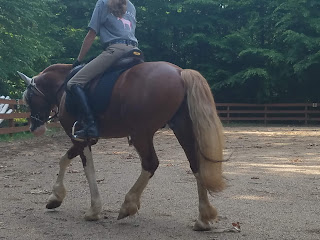 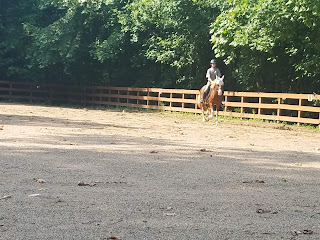 She began to trot and had nice, soft hands. Roscoe reached into her contact and was happy to work. He was not doing anything flashy or extraordinary, just what she asked for. Occasionally, I told her to add leg when I thought he was being lazy. Roscoe thought it was a bit weird when she did a 2 point and was really close to his ears, but he kept going. 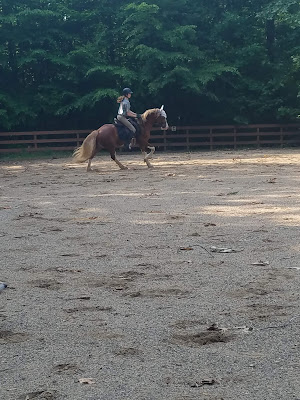 When it came time for canter, I held my breath. I told her to ask from trot, sit and use outside leg. This was where her hunter training vs his dressage training caused a little issue. She dd have to pick up the whip to convince him she really did want him to canter. I had to remind her to sit for the transition since she was still posting and confusing him. But soon they put it together and did canter.
Can I just say I was a proud pony owner? Roscoe took care of her and behaved, but he still showed her things to work on. She was able to give my pony the exercise he needs and maintain a basic frame which will help keep correct muscling. And I got to give her an experience so many gave me when I was her age.
I think Roscoe has an excercise rider while I am trying to get better. One less thing for me to worry about.
Posted by Nicole at 3:09 PM 5 comments: