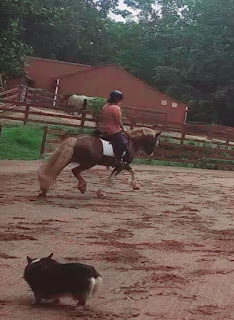 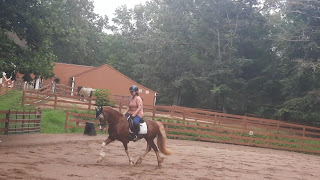 It just happens to be KML Maximus (Formerly Mischief Managed) 1st Birthday.  He has been sold to an eventer in Georgia who plans to keep him intact. She also owns and events a Cardi grandson. Definitely will be exciting to see him develop. 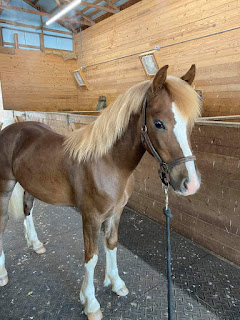 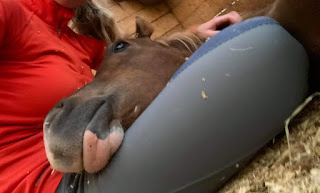 And Ragtime is figuring out life outside the womb, but she is not into pictures. The breeder said "she is lovely, but I can't get a good picture. "

She posted a cute video the day she was born.

She just sent some updated pictures. 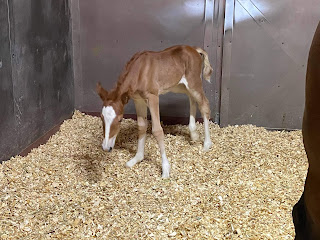 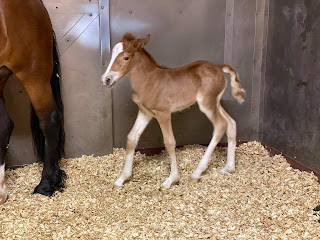 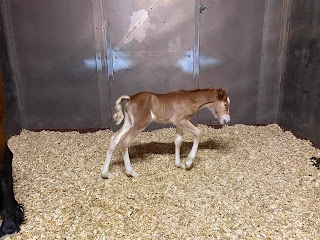 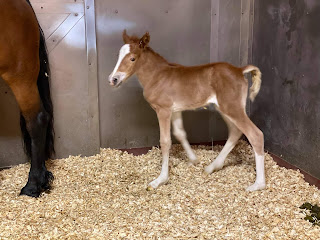 Thank you anyone who is able to donate to DaVinci's treatment. Mom was able to find the $925 medicine online for a significantly cheaper price, so that helps. My Magna Wave practitioner is figuring out the best practice for his treatment. Hopefully we will see a difference soon!

Ok so Gypsy Jazz has put her owners through so many false labors, they began to worry. Finally this morning around 2am central the breeder woke to find a foal in the stall. And after three years, Roscoe has another FILLY. I am so happy about that.

So here is Ragtime Reflection, a chestnut filly, with a blaze and four stockings. 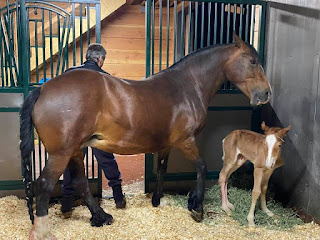 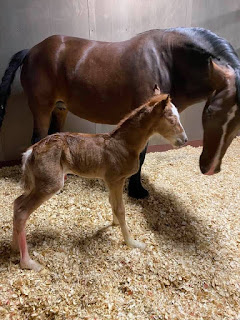 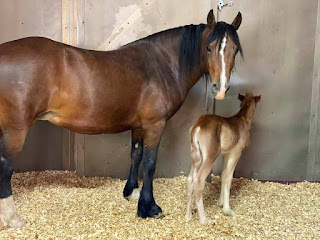 Everyone was agreed about the color and there was an even split about the gender. The winning factor this year was the birth date. Lauren of She Moved to Texas guessed the exact day, gender, color and facial marking. Congratulations! Send me an email at equipilot@yahoo.com to let me know where you would like your $25 gift card to come from and if you have any specific request for your cross stitch.

Next year could be a big foal pool if all the mares actually get pregnant. Tomorrow we collect to see if Gypsy's mom will catch this time. We are waiting to hear about one mare already bred and we have three, at least, waiting to breed. Two are just not progressing. It has been quite the breeding season.

Last Friday we had the vet come and check out Ember, who conked his head, and DaVinci for all his issues. The vet pretty much thought DaVinci's neurologic symptoms and facial paralysis was caused by melanomas on the brain stem and further down his neck. But to cover the bases he took bloodwork. 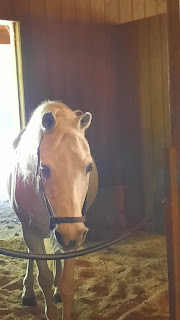 Today he called to say DaVinci has EPM. On one hand we are glad it is treatable, on the other we are in a position that the money is tough. The gold standard treatment is $1600 for four tubes. The next step down is $925 for an oral med for 30 days. 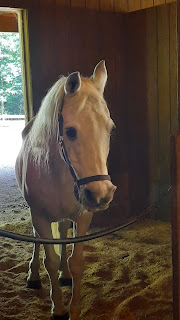 After my dad's heart attack, Griffyn's attack and all my health issues this is hard. So if anyone is willing to donate to DaVinci's treatment, we would be extremely grateful. We really want to give him a chance to recover which is why I am even asking. 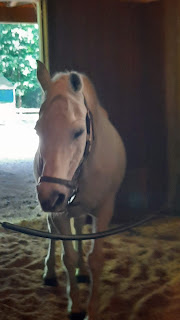 With help we can get Magna Wave to help with any inflammation caused by fighting off the bugs, which may need additional meds too.

Posted by Nicole at 9:24 PM No comments:

Can you believe it has been ten years since this blinged out red boy joined the world? 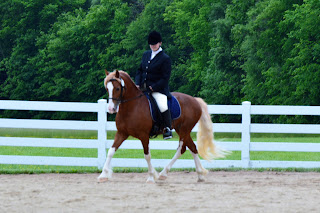 If you have followed the blog since the start then you know his history and how far he has come. We are talking about doing Second level next month. That has been a goal since he was six. 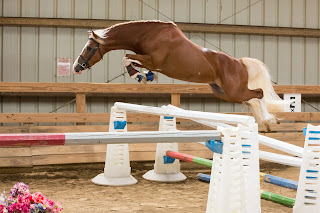 I cannot describe how Roscoe has influenced my riding and my goals. He is one of a kind, literally and figuratively. 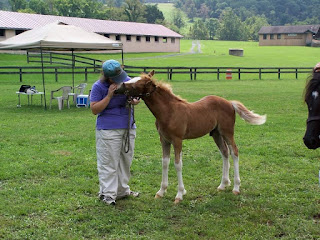 He sadly did have to endure a bath today and strongly objected. Ten years has not changed his opinion of water. It is really fun to wash a moving target. I made sure to bring him an oatmeal creme pie and then let him graze. That really was for me to let him dry, but hey he liked it.

And as a follow up to the canter debate, I am learning to really focus on my aids. Otherwise he will do a change.
We can pick the lead I want on the straight.

But the diagonal to counter is still a work in progress. He is slick at a simple change.

If I ride correct, we can do it.

Plus a little work on our rein back.

And as the day went on Roscoe nearly became a father for the 12th time. Gypsy Jazz decided to pause though, so we wait some more. 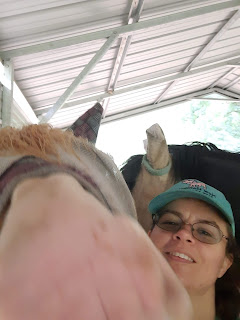 As Roscoe and I work towards 2nd level, the counter canter hangs over our head. With that also comes collection work. Friday Roscoe's breeding collection was put off due to the mare not being ready, so we worked towards the ridden kind. The new saddle has gone a long way helping us be able to to the work and start filling training holes. Like now Roscoe has to carry himself and maintain the gait. I am still working too hard. Fortunately, at shows he has more oomph and I can focus on the test. 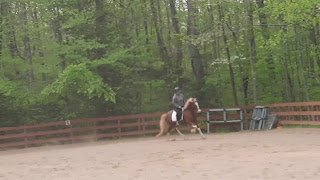 Roscoe also has strong opinions on what the correct lead is and is quick to execute a simple change. This continued habit has brought about the canter debate. I tell him whatever lead I ask for is the correct lead. He says the direction we go decides the right lead. 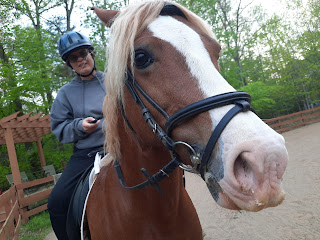 Poor pony threw a fit as I taught him that I make the decisions. It was a learning curve for me too. I had to figure out how to show him without giving the wrong cues. I was bending him too much at first. The first ride was a battle with only a few eventual wins. 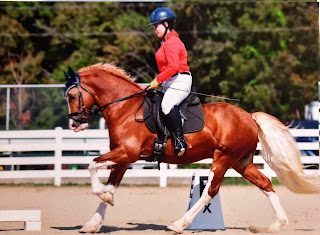 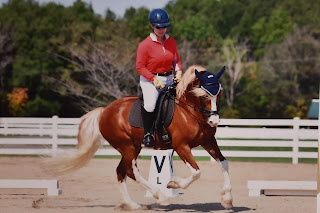 Cobs really think about what you teach them, a definite training benefit. The next ride was a different situation. We could go down centerline and pick up the lead I chose. That showed me I had to keep him straighter than I was doing previously. Lightbulb moment. We are still working on the counter canter next to the fence and his urge to change. I will take the baby steps.

Then on Tuesday, I did intervals which included trot lengthening and a bit of counter canter. He got the gold star for picking up  the counter canter on the rail both directions. We still have a long way to go to even contemplate 2nd level, but these wins feel like the right direction.