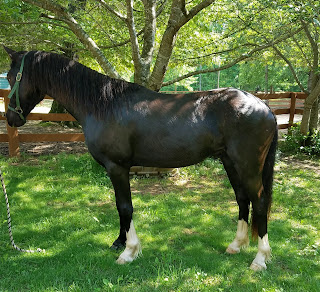 Sunday Ember turned 2 years old, can you believe it? It was hot and humid so we decided to give him a bath. I don't think he appreciated the spa day. Then we tried to get some pictures of him. Black horses are hard to photograph and gangly little boys are even harder. Ember looks so much better in motion. 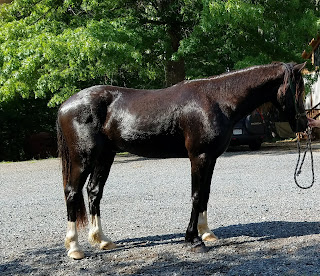 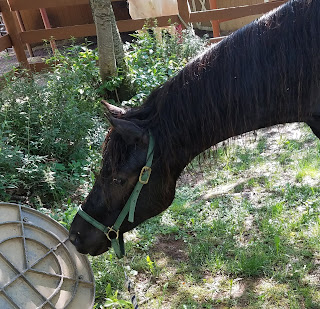 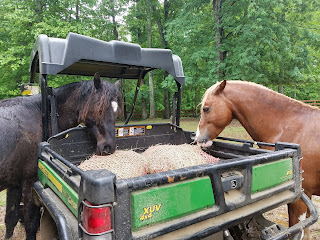 And then Monday Roscoe had to go for a collection. Peggy chipped him out of the mud before we headed out. Luckily today was a one for two collection. Two mares ended up at the same repro vet and are ready at the same time. Small world is it not? Tawe's owner is breeding one of her other Cobs. She messaged me to say "Hey there is another mare waiting for Roscoe"... "A Paint." I had forgotten that the mare is a paint and looked at her picture again. She has less white than Roscoe. Tawe's owner said she is cute. 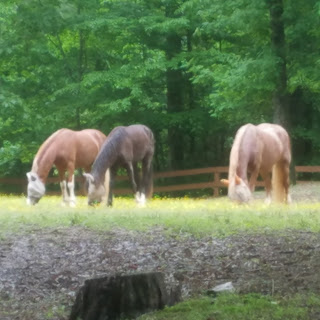 Anyway Roscoe went to work. The vet did not put a tease mare in the shed. Last year that proved to be too much stimulation. This time the main vet actually handled him and another vet managed the AV. I was really impressed with his timing. He let Roscoe act like a stallion, but kept his actions within safe range. Roscoe actually mounted straight on the first approach. But the vet handling the AV was a bit too slow and did not meet Roscoe's exacting preference. So he deflated. After that he said it was too hot to get excited over an empty breeding shed.
Time for a tease mare. Roscoe went outside with the main vet and got excited when he saw the mare going in. Again his approach was pretty straight, but the other vet did not get the AV on right. One more failure and the main vet decided to switch. This time the main vet got him in the AV as soon as he mounted and provided enough push to satisfy Roscoe's exacting standards. And just like that, Roscoe's portion was complete. Our picky procreator could now take a break.

Normally Roscoe goes on the trailer right after, but we found that Peggy had accidentally locked us out of the truck. Fortunately I had put my window down a few inches. An ERC worker was able to get a fly swatter in and use the little hole to pull up the lock. We were able to sponge off Roscoe and get him loaded while they processed the collection. Once they verified there was enough for two breedings, we headed home. Fingers crossed everyone. In a couple of weeks the mares will get checked. And he has another mare in the works too. She sadly was not ready and has to go another couple weeks.
Posted by Nicole at 8:46 PM 2 comments:

This winter I noticed some changes in DaVinci. He is a grey who unfortunately has the curse of melanomas. He has them in his mouth, sheath, tail and anus. Those are the same spots that Barry had them in too. Another grey I knew had one massive one by his ear. I love grey horses, but the melanomas are a sad part of owning them. Winston was the only one to not have them, but he did get seasonal carcinomas.

So my heart dropped a bit when I saw melanomas developing on his eye lids. His right eye has a pea sized one that causes a gap between his eye and lid. Already he has rubbed it the wrong way and had blood come streaming out and he has gotten dirt down inside to irritate his eye. We keep a fly mask on him 24/7 to help keep irritants away. 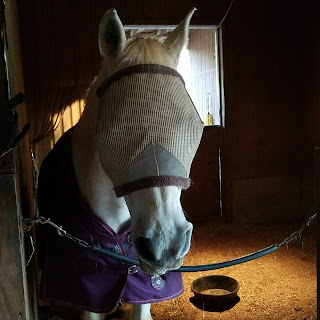 Not long ago he managed to roll in the mud and get dirt in the gap. Then he rubbed the hell out of his eye causing an abscess. I flushed it with saline and put some antibiotic ointment in the night he did it. The next day the vet came to confirm. He had a fair size abscess on his eye. We all worried the melanoma caused it, but hoped it was just the dirt. The vet made a serum from his own blood right at the barn. 3x a day he needed antibiotic ointment and the serum. 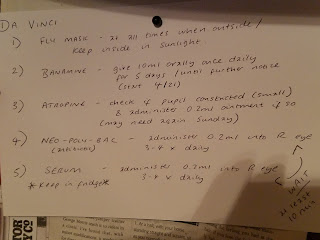 We had to make sure his eye stayed dilated. She wanted him on stall rest during the sunny times, but that only lasted a day. DaVinci is not one to be kept in a stall. After he did not drink or eat much the first full day in, we double fly masked him and let him out. Better he had a sore eye than colic.


The vet rechecked him a week later and was happy with his recovery. We can breathe easy for now. Later he may still lose the eye. That will be a scary time. DaVinci did not handle going to the hospital well the last time. Finger's crossed everyone that it will be awhile before he needs that surgery.


Keep posting your foal guesses! So far this year Ember has a new nephew and a new half brother, who is bay. I asked Ember why is he not bay! Ah well maybe someday we will get a bay.

Baby Steps With The Big Boy

In some ways Ember is behind where Roscoe was at the same age. Some is due to not having him from birth and some is due to him not getting as much time and attention. We have canceled two attempts to sit on him due to him being too reactive. No problem though, we don't have a set timeline. Six weeks ago, he was in the right frame of mind and I was able to sit on him. I even got on him again when I did not like the picture Mom took the first time. The only thing Ember cared about was getting treats. 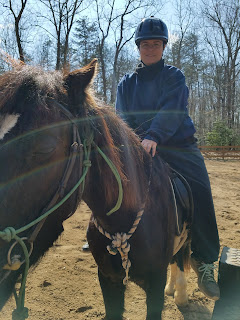 Since that time he has worked on the line and had that ponying session. Yesterday, Mom was off and I wanted to try getting on him again. This time we planned ahead for maybe walking around. So we put the western saddle on and worked him on the ground first. Mom and I were really impressed that his bending had improved. He normally likes to travel with his hind end travelling inside. The day was warm and he was pretty settled. We moved onto the mounting block. I wiggled the saddle, bumped him and put weight on him. No problem. He got itchy feet and had to walk around, but the next time I was able to mount. 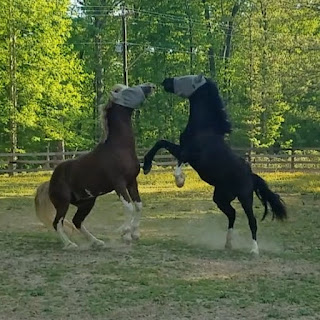 If you have ever sat on a baby, you know that it is like balancing on a narrow beam. Each movement feels bigger than you expect. Ember was focused on getting sugar from Mom. At one point she corrected his mouthiness, and he just lifted his head. So I picked up the reins to give his mouth something else to focus on. We asked him to walk a couple steps and then halt. At first he was following Mom who had the lead line. Then I could see him begin to recognize someone was on his back and that he maybe should listen to that person. Soon I was able to ask him to walk on, even adding a bit of leg. I used the reins to keep him from walking on top of Mom. His ears were flicking, but he was invested.

In total he did about two 20m circles. He was amazing! Taking these baby steps will make starting him next year easier. We may do this a couple more times and then let him be to grow. I am a lucky person to have not one, but two Cobs that are solid citizens in the starting process.
Posted by Nicole at 10:44 PM No comments:

It is that time again! Roscoe's 7th foal is due soon. This baby will be a full sibling to his 2017 filly.

I am so excited to see what 2.0 will give us, since Carousel has been stellar. 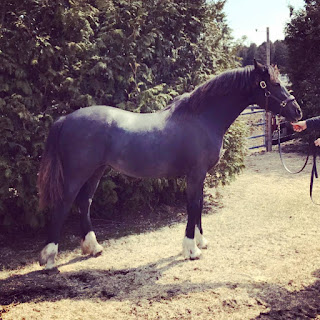 I will kick it off with a sentimental guess:
June 19th (Roscoe's and Barry's Birthday)
Colt
Medium Blaze
2 socks
Bay

Put your guess in the comments until June 17th.

Prize:
$25 RW Gift Card
AND
Two Horse Tack Pink Bling Reins
Made from 5/8" Beta Biothane with Rhinestones or Bling that starts from bit ends and comes up halfway up rein (does not include part where riders hands will be placed) 3/4" & 1" inch widths for Beta Biothane Base also available Strong, supple reins have a leather-like feel and matte finish.  Rhinestones are riveted and hand clinched in place for secure, long lasting fit Available in a variety of lengths and types!

And
A framed cross stitch 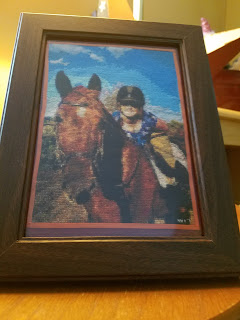