I have made more than a few trips to Indiana over the last two years visiting Roscoe and then his foals. During that time Jen and I have talked about getting together, but it never panned out. So this trip I made sure to check with her about the dates. It helped that this trip included an extra day.

After watching Connor over the years, I have long wondered how similar he would be to Comrade. He was so young when we saw him in PA. Cobs really seem to hit their mature build at about 8 yrs old. When we walked him and saw him in his stall at Jen's barn, you could just see points of Comrade. Their head shape and muzzles are nearly the same. Connor's blaze makes his head look different, but it is more an illusion since Comrade only has a shooting star. Not surprising to Peggy and I, Connor is a big mooch. These brothers know how to turn the cute on when treats are around.
Jen tacked up Connor and we admired his Micklem and rubber reins. Then the show began. Peggy used my phone for video and Lisa took pictures using my camera. 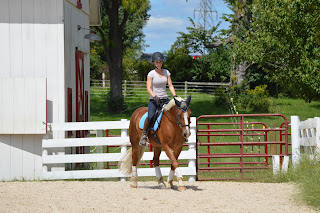 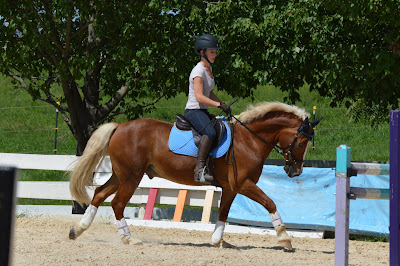 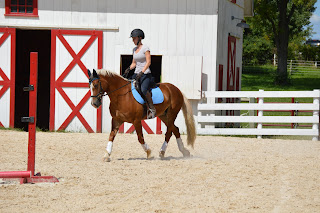 Though I have seen Jen ride in videos, it is so much better live. Like the difference between TV and live theater. You see the nuance, the communication between horse and rider, the bobbles and the successes. Peggy only recorded the beginning of Jen's ride because she really wanted to watch. I can't blame her. Jen and Connor are at a point in their training that the work can be fun even if it is hard. The tools available to train are the ones I find enjoyable. Her ride reminded me of when I ride DaVinci and can play around with the fun lateral movements to improve his work. Plus who can't help but admire the partnership they have developed. 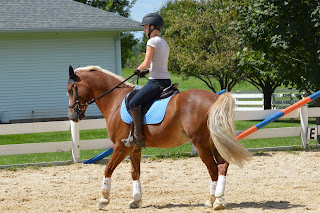 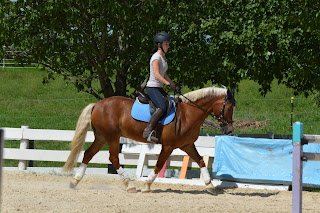 Jen wanted to make sure Connor was ready for me. I told her I would be happy just sitting on him. Not often do I get the chance to just ride for fun with no expectations. With my horses and Comrade, I am training. With Connor, he is trained enough that I won't mess him up and he is trained enough I don't have to ride every step. Bottom line, though every time I get on a horse I hope we both get something out of the ride, this was purely for enjoyment and discovery. 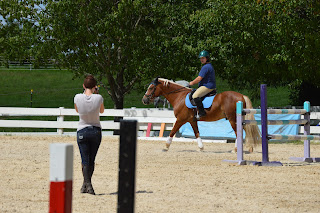 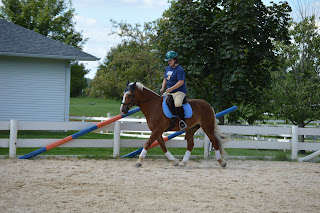 A big bonus to riding after Jen was that her stirrups are close to my own length, no wrapping leathers needed here.

So here is what I discovered riding Connor: 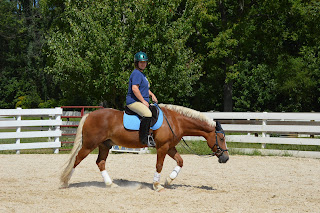 Connor has the same walk as Comrade. Which is plus and minus for me. I hoped Connor would be a much better walker since he did not have the chiropractic issues Comrade dealt with. But on the other hand it was a plus because Comrade's walk was the same as Connor's. Maybe Comrade is not as far off as I thought and has bounced back. Anyway he got the same "move on, I expect more" from me as Comrade gets because after riding Rosemary, Roscoe and even DaVinci you can't help but want more. 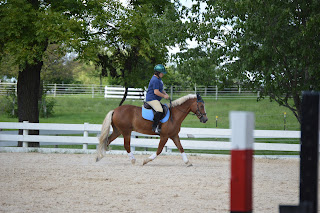 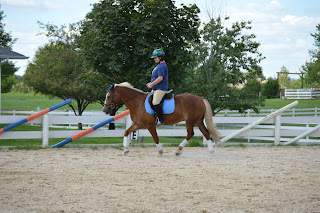 I was surprised at the contact weight in the reins. Connor had times were he was close to the point of saying "Hold up my head please." I just told him to move on instead. If he wanted to poke his nose out, I was okay with it. I was not going to carry his head. DaVinci taught me that lesson. Eventually he did figure out that was not going to happen and we had some nice moments. The consistent contact was great though. Comrade is getting more comfortable with reaching into the contact, but that has been a long process.

Connor is so straight compared to the wiggly Cobs I ride. I have been having an issue with my right rein getting droopy when I ride the greener Cobs. So riding Connor who knows how to travel straight, showed me that the droopy rein issue is all me. It seems my right shoulder wants to travel forward. I have to get used to rolling my should back every other step or so to check myself. I really enjoyed riding a horse who did not need me directing them to stay straight. The little things... 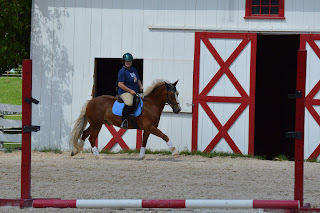 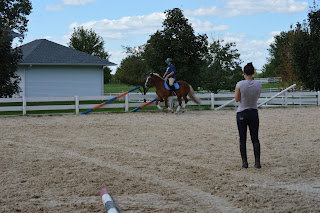 Connor likes to canter. Around a bend I asked him to step under and move on at the trot.  He surprised me with a lovely canter depart. My Cobs need more canter work so right now it is work to canter them. The ease of Connor was refreshing. You will see in the video where I did not manage the downward transition and he showed it by diving. Whoops!

Overall I thoroughly enjoyed riding Connor. Jen laughed when I said it was nice to ride a more made horse. Perspective is a funny thing sometimes. Connor gives me hope at what Comrade could develop into.
Jen put a cherry onto top when she asked if I wanted to jump. Uh, YES!!! No way was I turning down a chance to jump Connor. 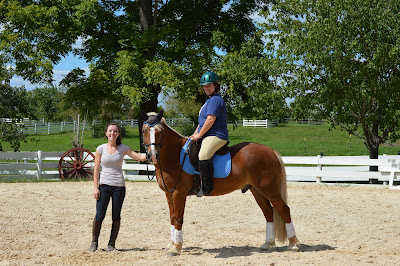 Connor cantered over one pole and then to the little X she had set. Of course I worried about my rusty skills, but the jump was great even if we landed on the wrong lead. I took the jump one more time and we had a longer distance, but landed on the correct lead. Pure joy filled me. I seriously could have continued to jump him and even gone higher. I restrained myself though. Better to leave wanting more than to regret pushing too far. 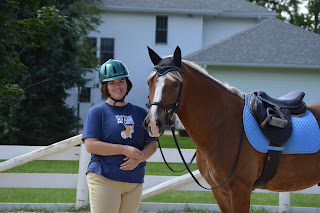 After the ride, I got to spoil Connor while Jen gave him a shower. I love how he turns the cute on high when treats are around. 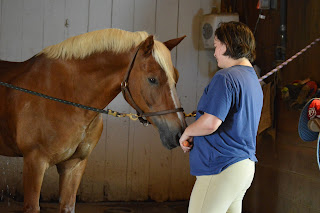 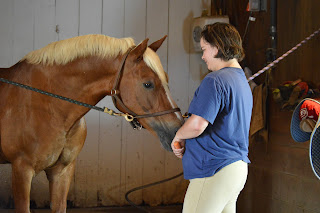 Now we need to get Jen to come out here and ride the Cobs. Maybe Comrade will be further along by that point. I called my Mom as we drove away to talk about my ride. I had to reassure her that I did in fact wear breeches and paddocks. My normal riding attire is just long pants and sneakers, so she was worried. Nothing like your Mom to ground you with one question. 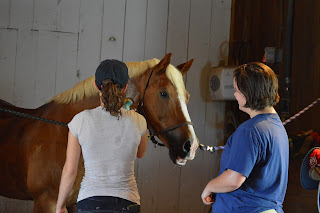 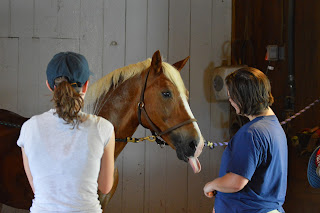 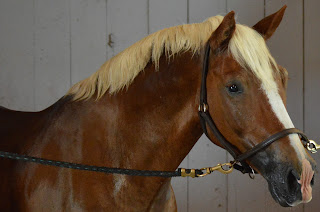 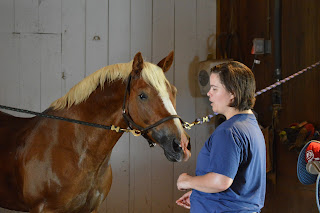