Westfalen NA Inspection, What a Day

The day before the inspection we had storms. I gave never been more grateful for an indoor wash rack. Roscoe wallowed in the mud and needed a full bath. Then we had to braid. He still believes I am out to torture him. 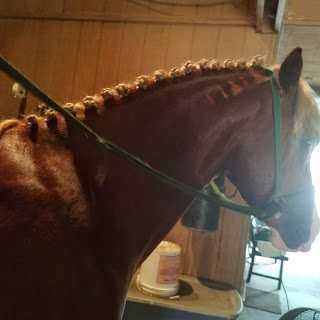 With a little help from Peggy and a bowl of forage we got it done. I sprayed him with WOW and let him roll in the stall.
Early Saturday morning, he looked good except for where he used a pile of poop for a pillow. But we could not get the front door open and I hated to think we would have to walk him through the mud to get to the trailer. Then Mom got stung as we were about to leave. Luckily a sting kit and Larry's magic fingers saved the day.

Roscoe loaded and we were off. He settled into his stall for what turned out to be a long wait. We were overwhelmed by the response he received just standing in the stall. Peggy dashed off a hand written name/breed/age paper to put on the stall. A couple people seem to want use him for their mares.
When the judges arrived, they went through the paperwork. Since Roscoe is a pony, no x-rays are needed, so we had no missing documents. We had to wait for the order of go and then the briefing before the inspection started. Roscoe was 12th, last, after mostly mare/foal combos. He was the only stallion.
Having never attended before, it was fun to watch. The judge was not using a mic, so we missed a lot of the comments.


When it was Roscoe's turn, quite a crowd was watching. His handler held him for the initial exam where he is judged on conformation, breed style and is measured. 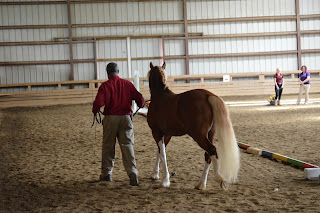 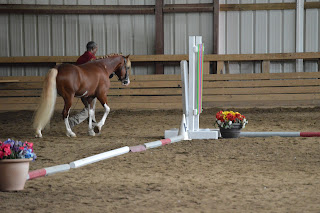 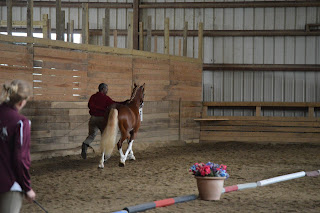 Then he walked and trotted in hand. He was a good boy for the handler. 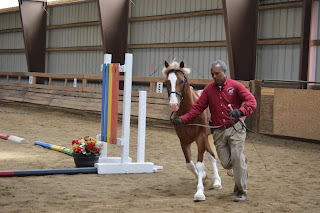 At liberty he just wanted to zoom around. Not surprising after spending hours in a stall. Sometimes he got distracted by mare pee or a mare in the stalls bordering the ring. 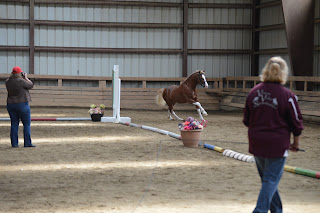 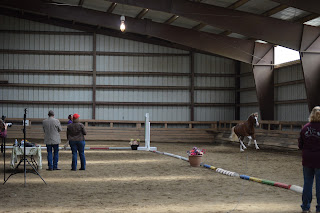 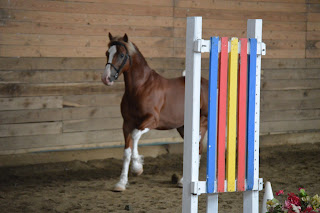 He also had to visit the crowd in the viewing room. They thought he was looking at the food, until we said that he came for the people. 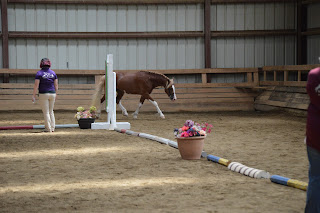 The German judge finally told the people to back off the whip snapping and let him be. Roscoe then was able to trot, somewhat. He did not have a chance to settle into his big, open trot. 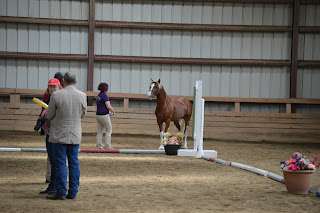 Next was the free jumping. He had to wait while they built the chute. Roscoe thought it might be a good time to poof up at the stallion in the mirror. Silly boy! 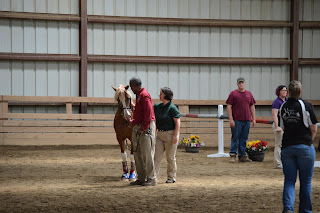 Sadly, they did not have enough poles/standards to make three jumps. They started with two small x's and built the second as he went along. Roscoe knew what to do and dealt with being led nearly to the first jump. Watchers were right on the side of the chute. I was at the end to catch him. 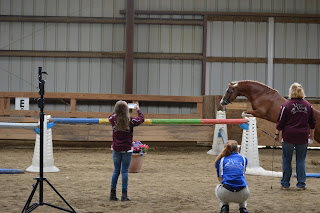 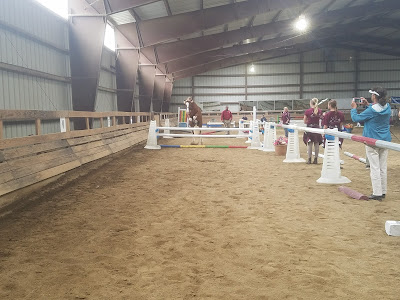 They put the oxer to the max height creating almost a box oxer. This one stopped Roscoe,  so they dropped one side and sent him again. This time he flew, with room to spare. Later on Peggy and I measured the back rail at 3'8. My pony blows my mind.


Finally he was ridden by the handler, but it would not count against him. He was energized and made the rider hold him tight. Riding ponies requires so much body awareness especially if you are over six feet. With very little time, they walked, trotted and cantered. He was deemed rideable. 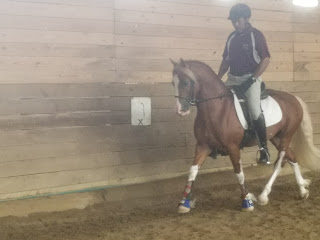 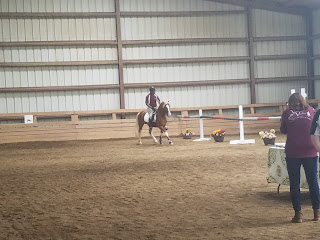 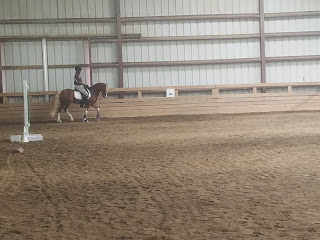 The judge believed he was of good type and conformation if on the small side for a Cob. He has "useful" gaits including the uphill canter that allows him to jump so well. Sound familiar? I guess if an Irish man and a German both say it, he really must have a wonderful canter.
While we waited for the scores, Roscoe received so many compliments. Peggy now has to make business cards for him because so many asked.
Roscoe had to get a microchip in his neck, but he did not even flinch. 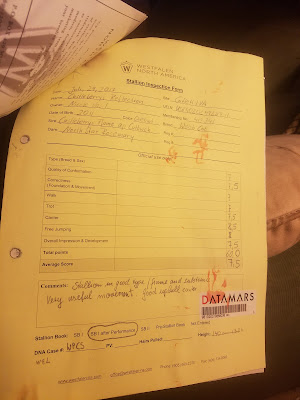 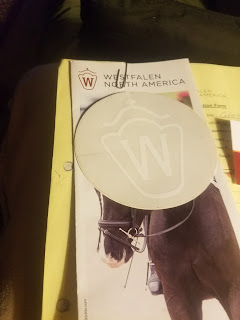 Then the score sheets were handed out. It was kind of German to me and I had to ask what it meant. His score makes him eligible for stud book 1 once he completes the performance requirements. For now he is in stud book 2a (don't know what "a" means). He is recorded, but not approved. One lady emailed me later and asked if they recommended he stay a stallion. I told her the notes did not say to geld him. They actually asked if we thought we could get the performance scores by next year. Uh, that may take a miracle.
It was a very long, but fulfilling day. Roscoe certainly did not disappoint and gained a new fan club. I can't wait to see the pro pictures. I am really glad we took this step. Now we get to see how his filly does in a few weeks.
Posted by Nicole at 10:25 PM