Finally after almost a month and the load dose of the new medicine, I am starting to feel improvement. I am not losing weight and slowly gaining energy. That said I still have bad days that pop up, but at least I was able to go back to work half days. Barn chores are not as exhausting. Hopefully soon I can tackle all the long toes awaiting overdue trims.
I am not the only one improving. Roscoe has made super progress with both his riders. Then he began to show some issues escalating to throwing his head up at the canter. With Kelly, we were not sure if it was the bit/bridle change or having too thick a pad. Then when he was just as resistant with the teen while jumping with a thinner pad, Mom knew there was an issue.
She put his saddle on and found it was rocking and pinching him which blocked him when he tried to lift. So we put Comrade's saddle on and it worked so much better. Mom convinced me to ride him on Thursday to see how he moved in the saddle. I had helped Mom drop/stack some hay, so I was shaky, but game to try.

Roscoe was my rock. His new fitness helped make up for my lack. I was able to get him to do stuff I could not before. Once he figured out the saddle would not hurt him he was willing to work. I even did some canter loops both directions. He is so much straighter and his lateral work is easier to ask for. It really felt great to ride. And it was great that Roscoe has moved forward even when I stalled. As I rode, I did not feel sick. Now as soon as I stopped reality came back. I had to hand my pony over to my Mom to take care of, while I sat down shaking. So maybe I won't try riding alone any time soon.
I was excited to see if Kelly felt a better pony with the different saddle. Well Roscoe reminded us that he is a stallion that morning by slipping past my poor dad and running into the old guy field. He unfortunately beat up DaVinci who always is a target because he goes out with Dottie. She of course was in season. Dad was alone and it was a hard call to get when he told me DaVinci was red. DaVinci let my Dad cold hose him until Mom made it back to the barn. 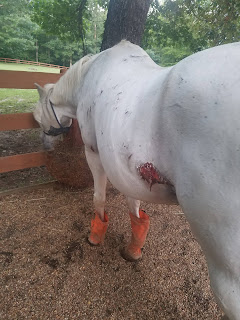 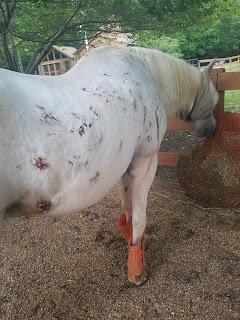 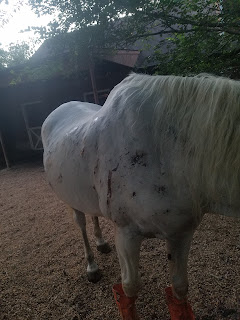 He is hurting like hell and will be on SMZs and banamine for a bit. Once he is over the acute pain, we will get him a PEMF body treatment. Luckily he stood for his PEMF treatment of his hock which he injured a little while ago and we did not want to lose time. Roscoe is an amazingly well behaved stallion, but given the chance he will act like a wild stallion protecting his mares. We do not blame him, but we do have to reassert his gate manners. Moments like this make you realize just how behaved he is normally.

DaVinci got some hits on Roscoe too. As I tacked him up, I told him he was not allowed to whine. He did work well since he could actually lift his back. His stretches and lengthening were better. Plus she could actually work the canter. She ran through First 3 and had a much better test than the first time she tried it. Kelly is aiming for Lexington next year. That seems doable as he continues to progress.
Posted by Nicole at 4:47 PM