anuary is my month of inventory at work so riding has been nil. The weather has also been wet so I have not really missed too many riding days. But Mom and I do try to work Ember when we are both there.
After the last ride where we cantered, he was a bit sticky. Ember would trot a little bit then stop suddenly. He has not done that since the very beginning. With all the mud we have had, we worried he pulled something and was a bit sore. So we moved on to him following Rosemary and learning about being in company. We chose her because either of the boys might incite him to jump and play. Ember was pretty quiet and followed her around. We even did a little trotting. That got him a bit excited and he thought he could play with Rosemary. Luckily he settled down. Mom trotted Rosemary while I had him stay in the middle and then we made him trot while she stood in the middle. Not too bad for his first time. 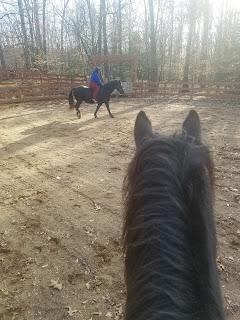 Last week we were together again so we tacked him up. This time I put the bit in his mouth which is the first time he has worn it while I was on him. The reins were still on the halter. He was still a little sticky but more willing to work through. He was a bit of a drama king, stomping his foot. I just moved him on. The wind picked up as we rode. Ember did not do anything that would lead me to believe he would be very dramatic. So I wanted to canter.

My difficulty was that he kept going high on the rail where there is a bank of sand which tripped him up. Added to not having much steering, the transition was interesting. I like to ask going into the solid fencing rather than the temporary one. Well Ember picked up canter and proceeded to do his impression of a bronc.

I had a death grip on the horn as I just tried to stay on. The entire episode lasted about 6 seconds, but it was pretty amazing. I did manage to stay on and I kept him going at a trot. 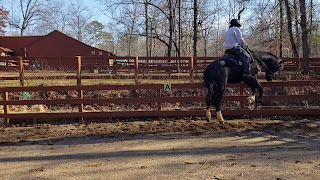 The next canter was smoother, but faster. Ember does a good job of staying under me even with all his funny business. We did a little to the left before ending the ride with a walk in the big side of the arena.

Though people would see it as Ember being naughty, I choose to see it in the positive. He picked up canter when I asked, only his second time under saddle. I was physically able to ride his drama. We all know six months ago it would have been a disaster. And after all the fun, he was still listening and willing to work. I shared it on Facebook because it was an accomplishment for me. For once the video matched what it felt like. No one should think less of Ember because he was a baby bronc. I have always heard some of the most talented horses can be difficult. He has time to grow up and I have time to let him. We also scheduled a chiropractic appointment to give him a tune up. And can you believe Mr. I HATE Needles actually let her put acupuncture needles in his butt??? Even Roscoe won't put up with them.  Ember had some tightness in his pole and his right hind. Hopefully he will be feeling better.

Next time I am not putting the bit in his mouth, maybe he will be less distracted. Yes I may still have to shell out some money to get a pro on him, but I am not ready to give in yet. I passed that health check, bring on the next.
Posted by Nicole at 8:57 PM