The Joy of Driving in Company 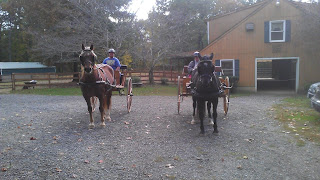 Finally on Saturday we were able to do something we all have wanted to for awhile, drive both Cobs. Rosemary has been driven with other horses being ridden before, but not with another horse being driven. She was the one we figured would be fine with the process. Comrade was the real question. He is not totally thrilled with driving and has had his dodo moments. So he was the first one we hooked. Peggy drove around with him a bit to refresh his memory. We gave him the lighter cart to hopefully make the experience more fun for him. Once he was settled, Rosemary was hooked up. She of course was ready to roll. 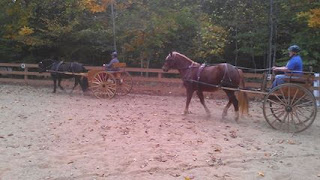 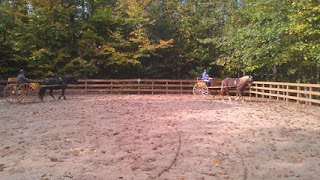 I cringed slightly as I realized the horses had the wrong color harnesses on for the cart they each had. Rosemary had the black harness with the russet accented cart and Comrade had the russet harness with the black accented cart. Good thing we were just driving around the neighborhood. But beyond the fashion error, the horses had no problem driving with each other. While in the arena, they led and followed, passed going the same direction and passed going opposite directions. 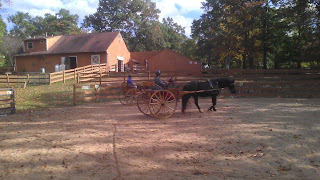 When they both showed no signs of worry we headed out of the ring and onto the road. This would be the true test and where Comrade normally has his dodo moments. We started out with Rosemary in front, so that Comrade could see her. I think both were glad to be out of the deep sand of the arena. Soon it was apparent they were okay driving in company and we could enjoy the lovely fall day. I hopped out to try and get a nice shot of them both. Unfortunately, Rosemary kicked in her big walk and out distanced Comrade so they were a bit too far apart. 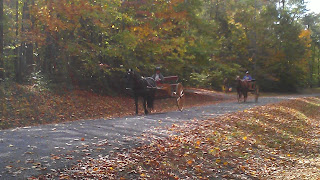 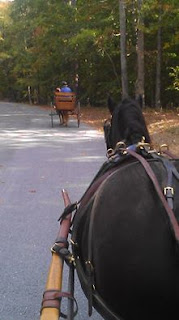 The day was so nice we just continued down the road with them and let them trot. Comrade took the lead and I was able to get some video. He was not as sure being in front, but he still did really well. As we turned to head back to the barn, Comrade again followed. Heading home can be his problem time. I kept watch on both horses and kept an eye out for vehicles approaching. Comrade actually seemed more responsive and willing with Rosemary driving with him. It really makes me want to see how he does in a pair situation. I did have a "Oh Shit" moment when I looked back as we were trotting to see an SUV on Comrade's ass. I don't know what the driver was thinking, but all I could imagine was Comrade spooking and running into Rosemary. So not good. It worked out okay though. I told Mom there was a vehicle and she slowed. Peggy worried about how close the vehicle was, swerved to the side sharply. Both horses took it in stride while the idiot driver moved by. Then to further test the horses, we came up on a horse and rider. Our social butterflies of horses though they should be able to go and see the new horse. They had to tell them both to get back to work and focus.

Overall it was a complete success. Maybe I can get Rosemary out to some driving events next year. Plus I can't wait till we have all three driving so I can join in too. Roscoe is still coming to terms with the thing that will be behind him. I think we are just going to have to bite the bullet and hook him up to get him over the questioning. But that will have to wait until after our trip to Florida. Hopefully my ponies are not to wild and wooly by time we come back. I definitely see some clipping in my future.
Posted by Nicole at 9:37 AM