Hard to Say No

Thanks everyone for the positive thoughts for Comrade. He is still at Morvan and on his way to healing completely. He took awhile to clear the salmonella test but finally came off iso last week. Peggy said he has put on 80lbs and has eaten them out of Dengi. Hopefully he can come home in another week or so. 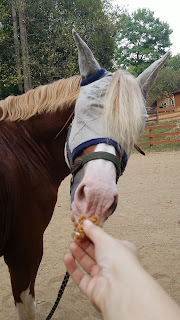 In other news, I think I just might be turning a corner in my own healing. I hesitate to hope or even write it, but there it is. It comes at a good time since Roscoe seems to have lost all his exercise riders. The teenager was not unexpected once school started. Kelly was a hit. She had all these plans and then poof... no more. I can understand the time to come out is tough. She did offer to care lease him for a year and bring him to her trainer's. It was hard to say no, but too many factors make the situation difficult. I promised Roscoe he could have turnout buddies and live as normal a life as I could give him. That would not happen at a boarding barn. Plus the added difficulty of him being an active breeding stallion. Kelly does not have a trailer, so I would have to pick up my trailer then go pick him up before a collection which would be a nightmare timing wise.
I think she thought there was a chance I would let him go because we have started Ember. Except Roscoe is my therapy pony, who keeps me motivated while dealing with all my health crap. So we will go back to the slow track we were on and continue to build from the progress Kelly made. 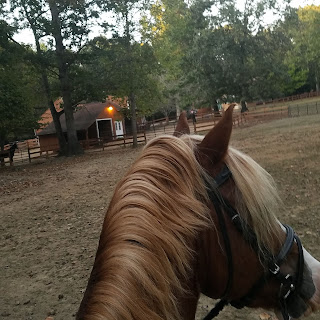 Recently I have taken him out into the turnout for his rides. He has to figure out how to hold himself up on the uneven ground. The first day he said it was too much work, but the next ride he went right to work. A benefit is that he can't run through stuff as easily and slows down. Then when we go back in the arena, he listens to my cues better. We have had some really fun rides. Maybe if I keep improving we just might be able to do a first level test in the winter series.
Posted by Nicole at 4:05 PM