Roscoe and I worked really hard this year to take on First Level. Luckily I did not lose training time due to Covid, but I did have a UC flare that derailed me a bit. New medicine helped get that somewhat worked out, so I made the leap and signed up for a show. Little did I know my wheels were about to fall off.
Losing Rosemary knocked me back health wise. I started to feel hungry, but then eating would make me want to throw up. Ugh and the cramps were the worst. My energy level dipped and Mom started doing more of the work. I was still determined to do my show. It changed from a Sunday to an evening Saturday, which gave me a day to recover before work.

My only worries were what I would wear and if I would be able to do Roscoe justice. I did have a moment of maybe I should back out, maybe ask Kelly if she could ride, but Roscoe and I have done our 'firsts' together and this was one of the biggest. I did find some pants that were a little big and some boots that were not falling off.  The other worry would have to wait and see at the show. 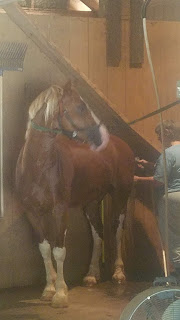 My Mom was my hero. She pulled his mane, bathed him and loaded the trailer. Roscoe was his normal drama king self which I am used to. Sadly he popped a rivet on his name plate, so I had to duct tape it so he did not catch on anything. We loaded him saddled for the short drive and Mom bridled him before unloading. We were set.
As the first rider, I had the arena to myself for warm up. Roscoe, not having been ridden in ten days, was full of it. I had to work hard at redirecting his energy into a more productive gait. When I had him working, we played with our lengthening and our canter. He felt amazing! If we could have gone in the show right then, it would have been great. Sadly we still had ten minutes to kill and a big fancy horse had come into the ring. His rider ran into us at times. He did not seem very aware of who was in the ring. Well when I went to put Roscoe together for our test, the big fancy horse came up fast behind us and scared Roscoe. After that warm up was a battle to avoid the other two horses who were now out to eat little pony stallions. I called uncle since I had limited energy.

Unfortunately that meant that the horrible shoulder bulge which is Roscoe's default came out. We lost our bend. Our test was tough, but we pulled it together enough to not have to hide our faces. The sun came out and I was zapped. Roscoe saved us by remembering his training. I knew the test was not our best effort, but considering the circumstances, I was happy to have finished. We did not get comments at the end due to Covid. I made Roscoe carry me all the way back to the trailer because, I was done. The heat and lack of energy did me in. We sponged him off and loaded him up. I did not know if my test would be ready, but decided to walk over and check on our way out. Turned out it was ready and had a score I could not believe, 68.44%. The judge saw our lack of bend, but also took into account his energy and gaits. My tiredness effected my position, so I lost a bit there. I watched the test and decided that as bad as it felt, it came out better than that. I was not crazy to trust our training and make this debut. If we can do this when I am not all there, just imagine what we will have when we are both ready. 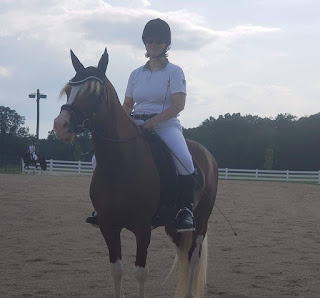 We would not know placings until Sunday, but I won just by doing the show. There were six others doing first level tests. I nearly fell out of bed this morning when the results posted. Roscoe and I won the TOC First Level and had the high score of the show. I thought my score was because it was a judge that likes Roscoe, she gave us our tens two years ago, but maybe just maybe we are doing better than I thought. Roscoe does not get the recognition he deserves for being the amazing pony he is since I am not a well connected person in the horse world. But how many ponies can you ask this of and they deliver big time? I love my boy drama and all.