After the first lesson I was feeling good, riding the positive wave of my trainer seeing growth even after a month of riding only 5 times. My mom and I settled him into the stall, which Roscoe said did not have enough sawdust for a good roll, and then headed to the arena to watch the cavaletti lessons. This camp divided people into groups of three or four for four sessions. I though the lessons were ½ hour to 45 minutes, but they ended up being an hour… ish. Not going to lie there were a lot of poles and it was interesting. As we watched it got intimidating. The instructor was an event rider who demanded perfection but did not give much direction. I could see areas that would be hard for Roscoe and I due to our weaknesses and the fact that we had not cantered poles a bunch. But he and I normally enjoy cavaletti and there was a chance for jumps. 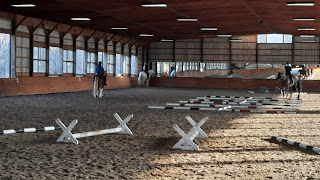 Sadly this lesson fell into the category of a bad choice.

The instructor could not stay within the scheduled times and went over a half hour the session before mine. So my 4:30  lesson did not start until nearly 5:00. And yes we stood around with tacked ponies for that half hour. The lesson started well with working trot over the poles and finding our spots. Then she had us work one at a time doing canter circles over the single poles. That was not bad, though we missed some of our spots. What was tough was her directions were hard to follow. I remember dressage tests and jump courses, but could not get her directions.

The next step added a curved bounce line of poles. At the trot Roscoe wanted to cheat and we worked to get it right. At the canter to the left we did better than I expected.

The bad choice really became apparent when we switched directions after 15 minutes of standing. I should have insisted we start with the lowest setting, but she had it rolled to the middle height. Going right is when I lose his shoulder when we are stressed. Needless to say we jumped over the end of the cavaletti and had major misses. I tried counting which the instructor was big on, we missed. She said he was going too fast and I was messing him up. Confidence direct hit. I approached a couple more times and passed the poles not comfortable with the probable outcome. She said if you pass again you will never get him through. I got him through, but without watching the video I can’t even remember how it went. I was beaten and done. I kept apologizing to Roscoe for choosing to continue this lesson and put him in a bad spot.

I was the happiest when it all ended, sad to say.

The next time I have a bad feeling about something I am going to refuse to do the exercise. It was overly ambitious to do for a second lesson with horses that may not have ever done such specific work. Unfortunately, Roscoe felt the effects of the lesson the next day and is even still be dealing with something now. Roscoe got a ton of treats and his dinner. Mom and I still had to get to the barn and feed the rest of the herd.

I don't shy away from sharing the good, the bad or the ugly and all of these apply so I included all the videos except the early flat minutes.

The next morning I was so glad not to be riding with the cavaletti instructor which was the normal camp setup. My trainer changed it around so that her students rode with her. My mom and I did mention that we did not think the cavaletti lesson was suitable for the situation and the lack of punctuality was a problem. Turns out we were not the only ones to say something. I am the kind of rider that puts a fair amount of trust in the clinician to guide me to have the best ride I can in that moment. That does not mean it has to be perfect, but if I or Roscoe do something wrong, I would hope for direction on how to fix it. I am still kicking myself over this lesson.