Sunday brought an 830 am lesson with my trainer. I told her I took a hit to the confidence the day before and that Roscoe might be sore. The plan was to work on canter. Roscoe was a bit put out with my spur choice and decided to protest by not transitioning. 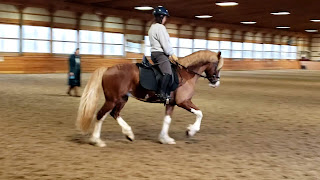 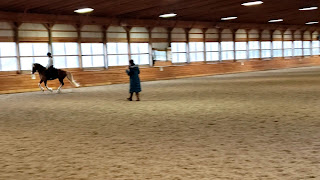 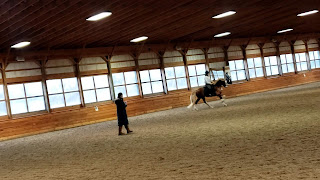 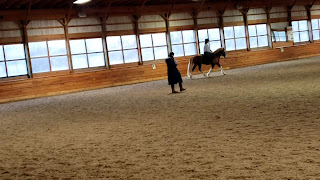 We worked through that by moving him and suppling before tackling the tougher stuff…canter serpentine. He is getting smarter about the difficult stuff and will just change leads or break, so it has been a process. We started with shallow short curves which were improved since the last time she saw them. It took a bit of timing since a really nice Morgan gelding was having a lesson at the other end. We moved onto two curves. Right was okay, left is much harder. 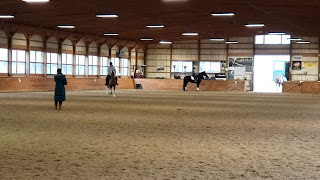 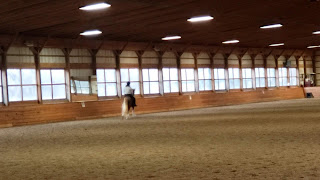 She then added some trot lengthening where Roscoe thought he knew better. A discussion turned him into an inverted teenager before he finally attempted to do the exercise. His final one was probably the best of the weekend. I would not say he was a 100% at the lesson, but it was good for him to realize he can still work. At least I felt somewhat better going home.

Roscoe was thrilled that we were taking him home to a stall bedded deeply with sawdust. He has very specific standards. Once we unloaded the car, cleaned the trailer and put him out with the boys, we had a little time to chill out. Our Magna Wave friend was coming to treat Griffyn, who my sister was bringing, on her day off. It seriously pays to have her down the road. Since she was coming I asked if she could treat Roscoe again and hopefully help him recover better. She did and both red boys enjoyed the treatment. 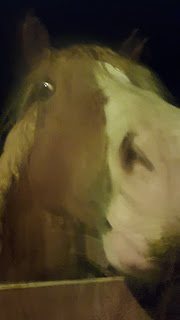 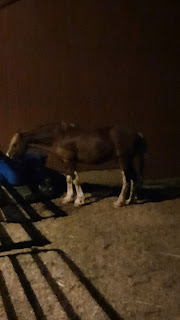 Sadly the cavaletti lesson and other factors continued to cause issues in the weeks that followed. We had to call in the big guns. More on that later.