Well our July show got canceled and so our 2nd level debut will wait until August. Which turns out to be a good thing. I was feeling more pressure than I normally do and having a confidence crisis. And my pony who reads me well was getting worried too.  Battles galore and drama have filled our rides. 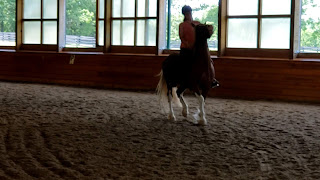 The downward spiral started when my medicine was in a delayed delivery status due to paperwork not getting where it needed to be in June. Added to the thought of missing doses was the fact that my second Covid shot was two days before the show. Spoiler alert: I did have side effects, but still managed to bathe my pony.  And the continued worry about whether or not DaVinci would improve had its own effects 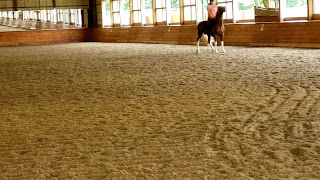 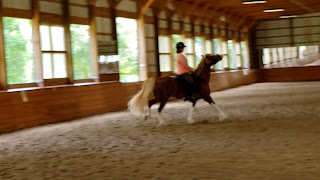 If you have ever had a chronic disease you know the stress of not wanting to decline, especially due to a paperwork issue. That stress rolled into my riding and it just felt like I was failing all over the place. 2nd has been a goal for four years and now that we are there it is freaking scary. How do I move forward?

I am trying to focus on the details, transitions and building his strength. Plus we are working on his neck, trying to get him to flex either way and get out of the rut only moving one way.

Roscoe and I still disagree about counter canter, but hopefully we can pull it off in August.

The shoulder in, we are using a 10m circle to help aid in getting our form.

So much is better, and that is what I need to focus on. The video in my last post came after all my crisis and is helping dig me out. Having a respected rider say “Holy S*@t, he looks awesome” goes a long way. My trainer who was riding at the time also decided that Roscoe is emotional and he worries when he does not do things right, so we have to be soft but firm. 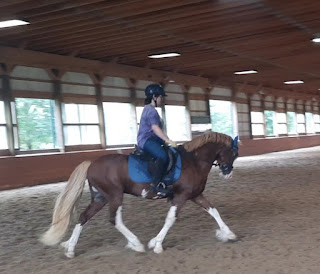 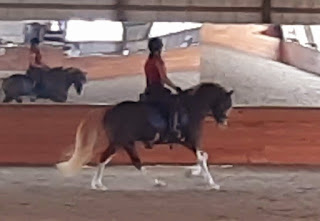 For Roscoe, the August show will be his last dressage show for the year. I know 2nd is a stretch so I will debut and retire to focus on training. Goal achieved within our current scope. Our first go is a real ring was not a train wreck so I have hope.

Then both my boys will go to the Welsh show in September. I feel it will be a good mental break for all of us. Everyone send me some longer legs so I can keep up with Ember! Finally we actually have Cobs in our area now. When we stopped showing there four years ago, mine were the only ones. One of those cobs is Roscoe’s son Aderyn Du Flyboy and some others are his grand foals, making it a family affair. The long day will end with a ride in Ridden Cob for Roscoe. Sadly we will still have our mismatched tack then so it will be just for fun. 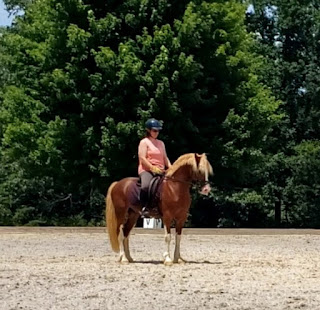 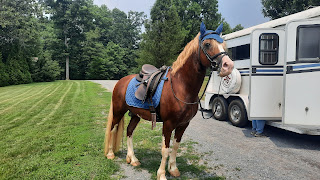 Ember will get a post about the change in his life soon. But let’s just say the confidence crisis extended to him too. Canter is not a confirmed thing with him and that has made me feel like the worst green baby rider ever. Mom asked me whether or not we should keep him. No way is he going anywhere, so I found help.

My medicine finally arrived, though I  have to miss another dose to be completely back on track. At least I can pick a less hectic time to miss when I am not totally over faced by life in general.

Meanwhile Roscoe and I can have a career in mobile poop picking :)