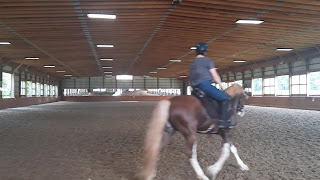 I was beginning to think our Second level debut was cursed. Last month it was canceled due to weather that never actually happened. Then this month is all rain and super-hot, humid weather. Roscoe and I do not do well in humidity. The weather meant we had one ride in the week before the show and that was a lesson where we could not get a good transition. I was seriously questioning my choice to go Second, but I am also a stubborn person who does not like to chicken out. My trainer was not thrilled with my need to prioritize movements, but I do want I need to get through first time tests.

The weather forecast was questionable with all the tropical storms developing and moving. The organizer held strong and the show went on. I took a huge chance and washed Roscoe on Friday even knowing there was a chance for rain in the night. 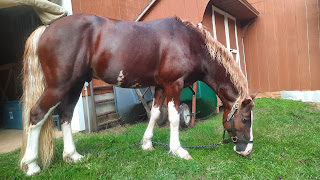 In the morning he had only gotten splash spots on his hind socks. I had used WOW and hoped it would come out okay. Thankfully the early bath was a good choice since I found a flat tire on the trailer when I went to load. Somehow between when I moved it Friday night and Saturday, it was a pancake. 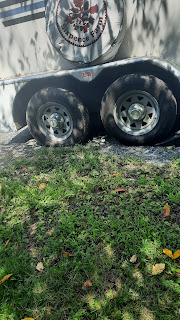 So Mom and I hustled to get it changed which required us to dig out the gravel below to fit the spare. Whew, I was dripping after. While we did that the boys ran around getting excited because the trailer moved a foot. And my previously clean pony rolled in wet mud.

Mom saved the day by taking care of him while I wrestled into show clothes. Putting on a tight body shaper cami is no joke after changing a tire.  Together we got loaded and on our way just in time.

The show was moving on time and it was time for the tricky part: warm up. The arena is in full sun and can be super-hot. I am still trying to find the right amount of warm up time to have enough horse left over for the test. I did figure out shoulder in is really hard for me without a fence. Our transitions were still tense, so I did what I could. Of course he was ready to go two tests before we actually went.

Outside the arena, he really showed a new maturity and found an awesome trot. Our first halt was a dud as he dived. I did remember not to salute with my whip. Not forgetting that again. I am thrilled to say our first medium was super. This will only improve as I learn to sit all that power and he can be free.

Sadly our shoulder in was not as good as warm up, but we showed a tiny bit. The rein back was hesitant because he decided to throw his head up just prior to going into the ring, so I took time to set it up. 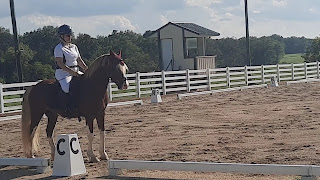 All our canter transitions were rough. Definite long term homework there. It was not the worst, so improvement. And my big fear the counter canter went well. The last medium was less impressive, but not horrible.

The judge did not talk to anyone, but did make comments of the paper. Her main comment was that he is a very supple and forward horse who needs more engagement in the transitions. Totally agreed. I am always my worst critic, so I nearly fell over when I picked up my score sheet to find we earned a 67% and later found we had placed second.

I am absolutely thrilled by Roscoe and that he brings it every show. Another 2nd level rider commented that “we are a great pair and she enjoyed watching us.” Now to get ready for the Welsh show and see if he can gallop.

Thanks for the encouragement! Dad gave me this pin one Christmas and it goes with me every day. 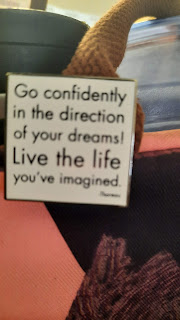 PS we are also prepping to do one more First level test so we can qualify for year end awards. Turns out we are currently first. Not too shabby for only two 1-3 test scores.