So Ember keeps getting bigger and with each spurt he has to figure out how to use his legs. As I mentioned before I was seriously feeling a lack of skills to move him forward. I could not afford my trainer to work with him, but found help closer to home. My PEMF therapist rides with a hunter trainer in the neighborhood. She was available to assess Ember. 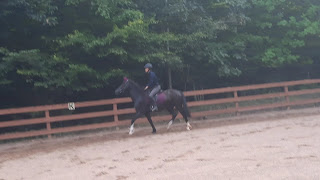 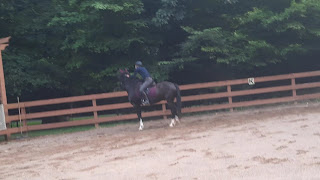 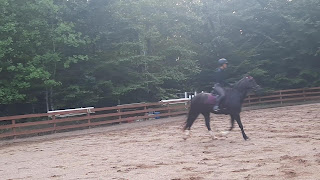 The first time, I rode him to show his movement. Dang pony actually cantered for the longest amount ever. She got on and put him through the gaits. Ember was so spooky with her. He did not believe she would protect him from the scary stuff ring side. Even with that he was really good. Her thoughts, he is very green and needs to mature.

The next two times she came while my Mom was there and did training rides. He had some progress and some steps back. She got to see a bit of his muleish behavior. Lunging showed it had to do with being ridden. So we may have to prepare him for work. 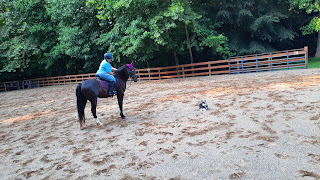 She believes he is still growing and to focus on bare basics for a while. The best part is that she made my Mom realize that she can ride him. Mom tries to make him a priority since Roscoe has to be mine.

Ember will eventually grow and be comfortable with what the trainer calls his enormous movement. When that happens, he will be very cool.

Sadly the trainer's husband had a really bad accident so she has not been able to ride him recently. I will say she and Mom have him moving much straighter than before. A huge accomplishment.