So, I have been on vacation for a week now. There has been rain. More rain and then more rain. We finally got some sunshine over the last couple of days. I took advantage of the good days to get some rides in. Monday, I rode Comrade who was very energetic after his time off and no longer bumpy. I just brought the bareback pad since I was not sure how the footing would be. Well, I got a workout riding the go go pony. I would do lateral work, but as soon as I straightened him off he would go again. I finally added the jumps that were still set up from the gymnastic. That got him thinking especially since we had to come at an angle. That boy figured it out and handled it great. I only did two in a row after he was in the working frame of mind. I love when they can take a break and pick back up like they had worked the day before.
At my barn I was itching to ride, but did not want to risk my older horses checking the footing. By default, Rosemary was up. This was also my first solo ride with both dogs. I put them on the buddy leash and counted on Griffyn to keep Deliah away from the horse. That went well. Plus the footing was great. Rosemary got a chance to walk out after days of mincing through mud. Even that short ride refreshed me. It is amazing what days of dreary clouds can do.

Today brought clouds, but I was determined to ride again. I had hoped Peggy could come ride with me. She ended up getting my message too late. Oh well, at least Comrade would get worked by her. My plans to ride more than one of my horses was shot to hell when I went to do Jenna's feet. I let her eat her food while I worked on her hind feet. That kept her occupied and cooperative. Unfortunately by the time I got to rounding her toes, she was not standing still any more. When I corrected her, she overreacted. Lately that is her normal response. I guess the girls did more than we knew. So I told her if she wanted to move, then she would move. I backed her, lunged her and waited for her to figure out standing was a good idea. It took a couple of sessions, but I was finally able to finish her feet. During all this, I saw where the abscess blew out. Talk about ugly. 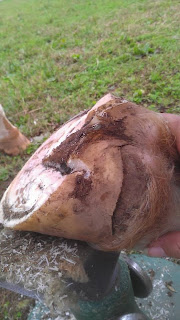 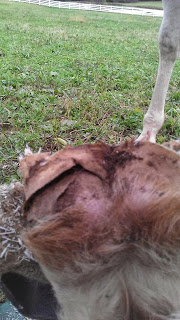 Well after Jenna killed my time, I decided to ride Dottie. Mostly because she was the least muddy. Then as I groomed her I thought about Rosemary. And to continue my multi tasking, I decided to pony Rosemary. The logistics of getting on Dottie while holding Rosemary... complicated. The actuality of it... a near failure. Even with a big mounting block I have to hop to get on Dottie bareback which combined with Rosemary pushing her, freaked Dottie a bit. After a "you will be okay" patting session we were able to start walking. Then came the "you are suppose to follow" conversation with Rosemary. Super tough for Miss Giant Stride to adjust to Dottie's lesser stride, but she did it. My girls were even able to trot together. I found using the driving directions helped me lead Rosemary. We did circles, went over poles and changed directions.
The biggest problem I ran it to: NOT ENOUGH SUGAR CUBES
I only pocketed enough for one horse. They each got a carrot when we got back to the barn.
At least my vacation has not been a total lost cause. Let's hope the rest keeps getting better.

Email ThisBlogThis!Share to TwitterShare to FacebookShare to Pinterest
Labels: ponying