I am such a lucky person to own more than one horse. Every time I can choose which horse suits my mood on that day, I am reminded of that fact.
Sometimes who I ride is a process of elimination. Such was the case the day Peggy and I went for a ride. Peggy chose Dottie to ride and since Rosemary had already worked I chose DaVinci. We could not have had a better ride. DaVinci was set on taking a walk around the corn fields. I decided to let me go with the thought of turning around if need be. I have not been out that way since Rosemary and I had our run in with the coyotes. We never did have to back track. Both horses handled the super tall, dried corn stalks blowing in the wind really well. The only bad part was that DaVinci was acting like a tourist, head up looking around. Anything that makes him hollow his back I am not a fan of. After the ride I had him trot around the arena to stretch and raise his back.

So the following Sunday, I decided to toss aside the barn chores and go for a ride. Although Dottie could use work, I decided on DaVinci. At first I was thinking about doing intervals, but when I got out to the arena a different ride emerged. DaVinci felt a little stiff so I added some should in to our walk warm up. Then a leg yield to change direction and repeat. He started to relax and stretch into his walk. With his background he can do lateral work in his sleep. Once we picked up trot, he tried to get me to hold his front end for him. Not happening! I dropped the reins to the buckle and left him to pick himself up. To help I kept him on bendy lines. Tear drops, bell curves and figure eights all helped him to step under in the back and lift in the front.
As I worked him through the patterns and even some 10m circles, I realized I only had to think about turning and he responded. He handles like a sports car. Considering that the other horses need to be set up well before a turn and helped through the turn, DaVinci is refreshingly advanced. Not having to focus on turns, leaves time to finesse him as a whole. Horses like him show the value of nuance in riding.
I almost feel bad for the other horses. DaVinci raises the standard. It may not be anytime soon, but I want the others more responsive. They do not all need to be sports cars. Not everyone can handle that level of performance, but I want something just as maneuverable.
How would you describe your horse?
Dottie would be a stretch limousine: Super comfortable, but have to plan for wide turns. If you know how to handle, a lot can be achieved.
Rosemary would be an old style manual sedan: She needs helping shifting gears, but is still dependable.
Comrade would be a small SUV: Dependable, wide base, with maneuverability

And a nod to Halloween, the barn owner's wife got this for Griffyn :) Deliah was thrilled it was way too big for her. 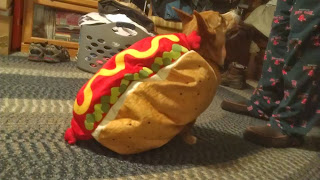