I have to say I am not totally sad about this weather. If it was perfect weather I would be so bummed to miss riding time due to working all these hours. With the cold, crappy weather I am not missing out.
I still get my PT, pony time though. Roscoe almost made me late yesterday with his antics. I put DaVinci into his stall and then as I was putting Winston into his stall, Roscoe decided he wanted to be with DaVinci. So he went UNDER the stall guard. Well limbo champion he is not, so he ended up opening the eye hole. I told him he had to go to his stall, silly boy.
I did not have time to go get the hammer and beat the eye hole back into shape, which meant DaVinci got to roam the barn. Before he left his stall though he had to rub his wet neck on the door frame. Later I found that he had rubbed on the open eye hole, tearing the lining of his heavy weight blanket. Since tonight is bringing the coldest weather we have seen in years, I had to patch up the liner so he could wear it tonight. My quick patch included cutting a piece of an old lycra tail bag and sewing it over the hole. Let's hope my sewing holds up.
As I was going horse to horse dressing them in coolers and heavy blankets, they all knew I had cookies in my pocket. They each went to their "go to" trick to try to earn cookies. DaVinci is head down, front leg up and cute ears pricked. Winston does the controlled pawing we taught him during his rehab time. Roscoe's is head down. Rosemary is stretch in any direction you are standing. Dottie just uses those big brown eyes of hers. Of course their antics made it difficult to put on blankets. I told them they could have cookies afterwards. They made sure I kept my word.
My PT was chilly, but definitely worth it. 8 days till my day off, Yay.

Here is our double layer marshmallow: 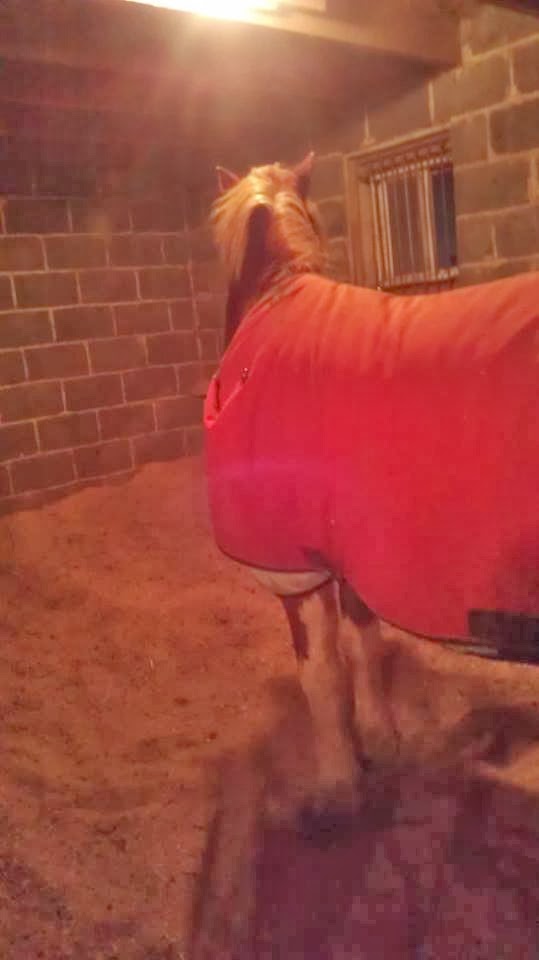 He is a lucky to get one of the real liners we own. Mom put some darts the neck to help the fit.

I have another late inventory tomorrow, but at least I have caught up on sleep. Plus I should not have to clear snow off the car after this one :) Bundle up everyone and stay warm.
Posted by Nicole at 9:52 PM