Colorful, But Not Broken

I caved yesterday and went to the doctors. I could move all my fingers but the swelling was pretty bad and I worried about my knuckles. So they immediately sent me to x-ray. Then I had to wait for the doctor to tell me what they showed.

Finally the doctor walks in and looks at the results. It was good news, no breaks. I was thrilled since that was my biggest worry. What the doctor said next made my jaw drop. She told me she was putting me on antibiotics for the scrapes on my hand. Say WHAT???

I really wanted to show her my left hand that has cuts and scrapes from trimming  hooves and my rasp because that is what the scrapes amounted to in my opinion. But I just said I was not worried about them. She gave me a blank look when I said I covered them with Calendula and later Arnica. Ah well, I guess she did not know the natural ointments. She did decide I needed a tetanus shot. So in the end Roscoe only gave me a severe contusion with some abrasion. Hurts though.
Since it was my right hand, I did take off two days from work and one day from the barn. Barn work and a ride tonight definitely aggravated the hand, but ice and a shower seems to make it feel better. The bruising is all around my fingers and even on my palm. 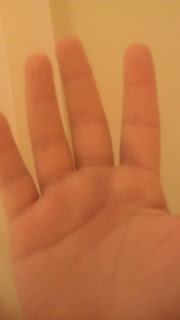 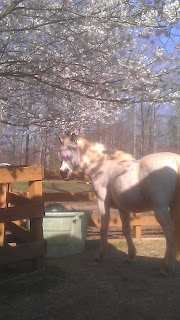 The day was pretty though with the trees flowering. Worth all the pain.

PS Lisa says she has moved the mares to the area near the house. Almost baby time! 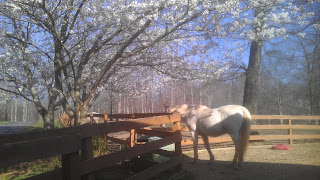