Where the heck has the time gone? Roscoe is a once in a lifetime pony, who we will probably never experience again. Even when his foal comes home it will not be like Roscoe. He was with us for so long even before he hit the ground. I can't say how many time I watched him kick Rosemary's belly and cause her to grunt. I think he will be my baby forever. His birthday also marked his first father's day and his sire's 9th birthday. 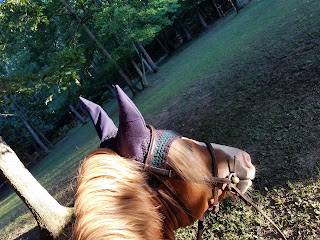 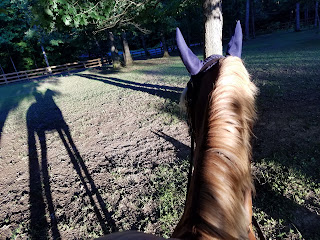 Roscoe and I had another ride out in the front field. This time we flew solo, though Peggy was right in the house. He stood perfectly while I mounted using a step stool, which was a slightly lower step and caused more pull. Roscoe knew it was work time and settled right in. His trotting downhill was more balanced and he figured out it was tough work. Eventually, he tried to come down to walk. I told him we were building his butt and the girls would like him more. We even did a little canter up the hill. I am kind of addicted to the Roscoe I get out in the field.

And Roscoe ended up getting a late birthday gift today when I received a message at about 9am. I had basically figured there would not be any breeding this year for him. Since the babies were born, there has been interest, but no inquiries. So imagine my surprise when a mare owner asked if she could talk to me. She said her mare was not pregnant and the stallion she was using was showing for 10 days. She wanted to know if she could get a collection by Tuesday, Wednesday latest. My jaw dropped. The collection center likes to have 24hr notice, so it was a total hail mary as to whether we could get him in. I called and they said they would look at the schedule.
Then the mare owner said that the vet wanted to wait until the next cycle, so I called and canceled my request. BUT, then had to re-request when she asked to continue the process despite what her vet said. Bless ERC, they pulled it off. Roscoe had a 2pm appointment and the mare owner had paid all within 45 minutes. Whew!
Next I had to call Mom and Peggy to arrange the trailer and coggins search. Both pulled it out and we were ready by time I showed up from work. I have a really nice boss who was happy I was using my "Use or Lose" vacation time. Seriously everything was going so well, this just had to be meant to happen. The good kept coming, Roscoe loaded like a star and we had time to get gas and lunch. We even arrived 15 min before the appointment.
I let the vet know that he had done live cover last year and was a bit wild. Since he was trained at this facility I hoped he would click back to his training. The handler came and put the chain through his mouth and led him towards the breeding shed. Roscoe knew what he was there for and was already dropped. They made sure he was listening before bringing him in with the teaser mare. When I told the vet Roscoe tends to go towards the teaser mare when he mounts the phantom, the vet said they would try it with the mare staying at the teaser bar. Roscoe's training kicked in immediately. They present him to the mare, get him ready, then turn him away to clean him. Then if he maintains his readiness, they bring him to the phantom. At first I thought Roscoe would need the mare closer, but after only a short time he mounted the phantom and the AV was in place. The vet keeps the handler apprised of the process with simple terms. Peggy and I laughed when we heard, "Ejaculating...ejaculating...Still ejaculating." Seriously, how much can a 14h pony have? Then it was done and Roscoe and the handler were walking away. I was so glad the process was smooth. I would have hated to have them fit him in and him be a tough case. The vet told us we could help the handler load Roscoe and wait while he checked the quality. We caught up the the handler as he walked Roscoe on the trailer. He said he was glad to have an "easy one" during his day. We were proud stallion owners. He is so smart!
Peggy went inside to ask about the fencing they use at the facility and came out with the okay to leave. The vet came up to her and said "There is only one problem with his collection" with a serious face. Peggy said her heart stopped. Then he said "he does not have enough bookings." The quality and quantity along with the above average motility made Roscoe's collection the best they have seen all year. That is a definite improvement from when he was tested as a 2yr old. The vet said there was enough in the one collection to breed 13 mares. That boy is potent!

So everyone cross your fingers and hope that the mare takes tomorrow! That would mean a Roscoe baby next year.
Posted by Nicole at 10:24 PM