When we moved to Peggy's, some things had to change due to the new location. This included getting a new vet and a new dentist. Last year the vet served both functions. I was a little unhappy that the only option was a power float requiring sedation, which is extra money. We dealt with it. This year we have since changed vets and used their dental service. 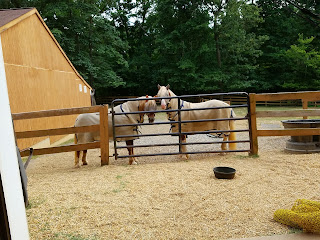 Well again we were stuck with the power float and sedation. Unfortunately the horses seemed really sore after the work. And the ones that were the most sore were not the ones with ulcers. I do believe you can do too much at one time. This vet used a head stand and everything.
So at the end Peggy and Mom waited for the totals. Peggy got her bill first for Comrade and about died. They charged $220 for one horse. Mom was amazed and worried what hers would be with five horses. It was $995. That was almost 3x what we paid last year. Insane. Not happening again. We may use the other vet for dental and this vet for everything else. Or we may just use an actual dentist and pay for the vet to sedate.

It kills me because a power float is supposed to be a more accurate, easier method especially since the horse is sedated, but you pay so much more for it. Plus I can't understand why the sedation is not included in the cost of the float since you have to have it. If your horse needs more than average, okay charge extra.

So much about owning a horse has increased in cost, but somehow we make it work. I hope I can start taking a lesson a month soon. It's tough since for the price of one, I used to take four. Ah well, I don't plan on giving up the horses, so time to tighten up the finances.
Posted by Nicole at 8:58 PM

Email ThisBlogThis!Share to TwitterShare to FacebookShare to Pinterest
Labels: Dentist