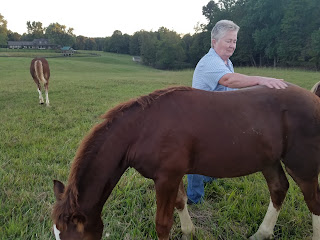 The trip to Indiana was a blast. We had great weather the whole time we were there which was a bonus. Peggy and I headed out early Friday with hopes of making it in time to see the babies before dark. As we were in the mountains my phone signaled a text with something to download from Lisa. I knew they had to be a picture, most likely a baby picture so I pushed download. And was sorely disappointed by the fact that the mountains hindered the task. It took me an hour, but the effort was worth the fun picture of Ember looking like a cute ragamuffin. His foal coat is bleaching making him look like he has blond highlights. 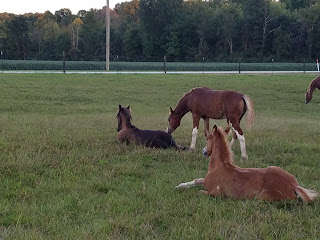 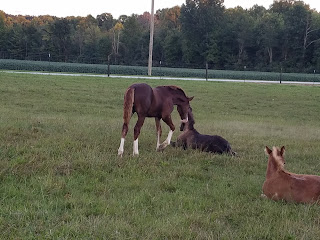 At first we worried what traffic would be like as we neared Columbus, OH, but then we remembered that it was not Northern VA. Sure enough we could only laugh at the traffic we encountered. I guess that is one good thing about dealing with NOVA traffic on a regular basis, it makes most places feel like your speeding. Though we did experience our first near miss near Indianapolis when traffic came to a stop out of the blue. Oh yeah how a pile was avoided I am not sure but cars were swerving onto the shoulder. Fortunately the only one to suffer in our vehicle was my cross stitch pattern which received a needle poke. Better that than my finger. 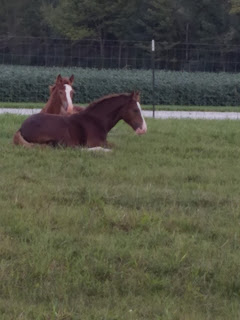 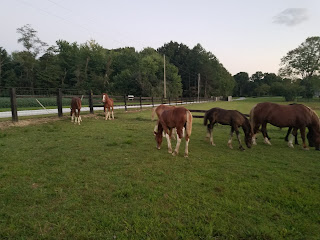 Anyway we managed to arrive with enough light to see the babies. Who have certainly grown. Some have shed their foal coats, but some still have a bit to go. Peggy immediately thought Mini Me looked like Roscoe as a foal. She said she almost felt bad that we did not pick him because it felt like we were rejecting Roscoe. He is definitely a favorite. After meeting Baby Royal she understood why we did not pick her. She is a super filly and needs to go somewhere she can be the center of attention. With my herd that would not happen. Baby Royal does get to go to the American National Welsh Show at the end of the month. Can't wait to see her in the show ring. 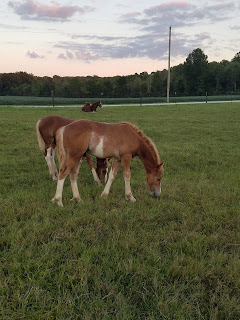 The two colts going to Canada, have names but I will wait to share until the breeder does, leave the beginning of October. They both will get show experience at their new homes. Peggy loved on Baby D, Comrades full nephew, as much as he would let her. He has shed out to a lovely liver chestnut color that makes his white pop. And lucky him Baby Ff who loves to antagonize him will be coming with him. Baby Ff is the sweetest of all the foals. He is always coming up for loving. My Mom said that with his round belly right now his huge belly mark makes him look fat. We could not do too much with them all since they were in a 100 acre field, but the plan was to move them back to the house.

On Saturday, my "I don't want to jinx it" event finally happened. I will do a separate write up for it, but here are the basics. Jen of Cob Jockey has Connor stabled only 1.5 hour away from the breeders, so we made the trek to visit Comrade's full brother. We had a blogger meet up, Jen and I and a owner of full brothers meet up, Jen and Peggy. Actually we all met 6 years ago when we picked up Rosemary, but that was a fly by. Connor was actually in PA at a farm where we dropped off another Cob on the way home. We got to see Jen show off Connor's moves and I got to crawl on and see how he compared to Comrade. More on that in the next post including pictures and video.

Next up we stopped to visit Comrade's nephews from last year who were joined by my favorite half Welsh, Rocketman. He is on lay up from an injury. Looking at him I wish I had a warmblood to breed to Roscoe. Reveille is like a little Comrade so it is always fun to scratch on him. Echo is in that gangly yearling phase, but is still so cute. His sneech of a blaze has had a diet and is not as overpowering on his face. I am sure Ember will have that awkward phase too.

Then it was back to the babies for more scratches and getting them used to being touched. Each visit Ember is easier to approach. My boy is a serious thinker. He had to think hard about Peggy since she dared to kiss at him during the first meeting. Silly baby. The tough part is the mares who just want treats tend to push the babies away. I learned to ignore them and only give them treats when I felt like it. It is fun to be in a herd that big though. 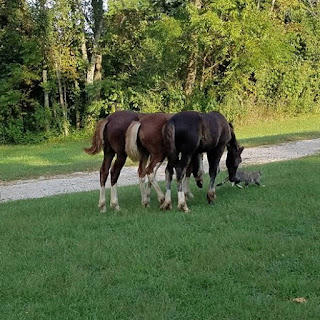 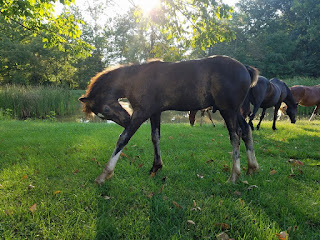 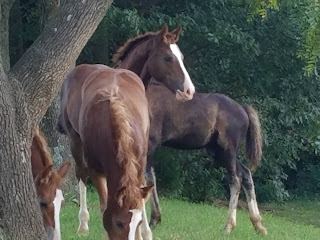 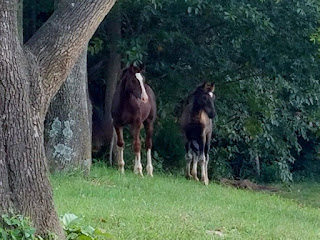 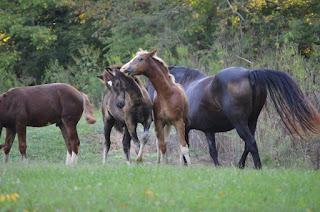 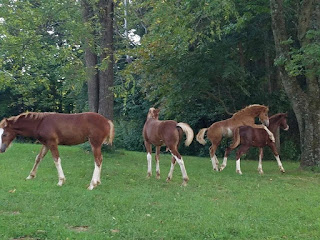 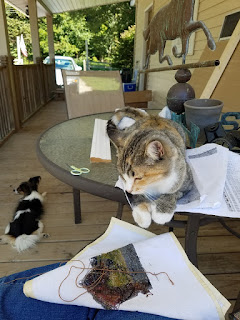 Sunday morning we lazed around until Lisa was free to move the babies. I worked on my cross stitch when the cat allowed. Even the cat is special with her five toes on each foot. Oh and Peggy did some shopping inspired by our visit to Jen. Now Comrade has a Micklem bridle and super nice rubber reins on the way and I have a hair net coming. All from Riding Warehouse who had a Labor Day sale. We horse people know how to use our time wisely. 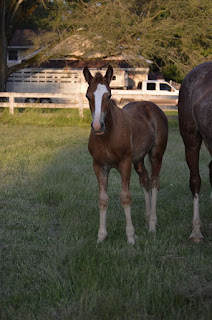 Then came time to bring the babies over. That was interesting since we had to get them into a smaller area in order to catch the oldest mares. With a big warmblood filly in the mix, that was fun. We managed it and got Ember and baby Ff  plus moms taken home. Poor Ember misjudged the step down and slipped. He ended up with a bloody scrape on both his left fetlocks. I told him not to worry we have a trailer with a ramp.
The next load was more interesting. We had the babies on the gravel road which decided to have more traffic than I have seen any time before and a little ditch that bothered the babies. So method A was to load Rosina and the filly. We managed to load Rosina, but the filly decided not to follow. And she did not want any pressure put on her. She is slightly opinionated. So we loaded Dyma Hi who the filly treats like an aunt. Nope no luck. So we loaded Rosalee and still no luck. 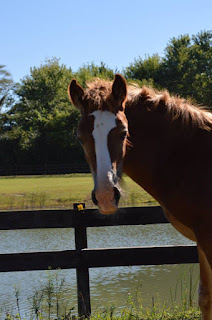 Onto method B, unload and retry. This time Rosalee and Mini Me went on first, followed by Dyma Hi and Baby D. This left Rosina visible at the back of the trailer. The filly said "NOT HAPPENING." She saw no reason too when her mom was right there. So onto method C, we walked Rosina and the filly home while Peggy drove the trailer. Ah well it got done. 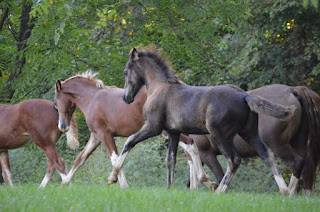 The light was going and they were all more interested in the rich grass when we let them loose to do any moving. So I got a few more pictures and just enjoyed being around them.
Monday came with beautiful weather and I actually got some pictures of the babies before we left. The best part was Ember approached me for attention a few times. Finally he is getting comfortable with me. Just about six more weeks before he comes home. 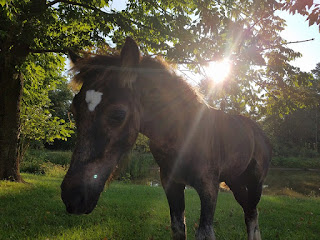 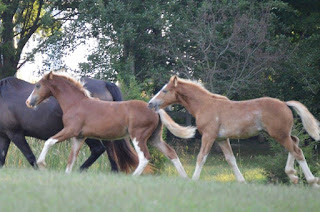 The drive home went smoothly except for two points both involving big trucks in the mountains. The first was when a semi was merging onto the two lane road we were on and did not slow down so we could pass first. Peggy could not move over due to a SUV on the left. Fortunately Peggy's vehicle has good get up and go and we wiggled by the semi. I really did not want to be smooshed only four hours from home. Then about an hour or so later on 68 in MD we saw thick black smoke and flames coming from a semi on the side of the road. Again we had to pass next to it because the left lane was occupied. As we passed a man went behind us to try and stop the traffic. The steep grades are sometimes too much for a semi's brakes causing them to catch fire. It is always fun to see the runaway truck ramps along these roads. I told Peggy we were lucky to get by the truck since it would probably hold up traffic. Sure enough when I researched it later, the semi carrying pork products stopped eastbound traffic from 6pm to midnight. No one was hurt, but what a waste of bacon. Peggy and I were glad to make it home.

Here is a link to more pictures on Facebook: Album Indiana Visit
Posted by Nicole at 1:19 PM

Email ThisBlogThis!Share to TwitterShare to FacebookShare to Pinterest
Labels: foals