Matching Ribbons For The Red Boys

"The only thing missing from this packed day is a hay delivery" said Peggy as we talked about our Saturday schedule.

My farrier came at 1130 to shoe Dottie and DaVinci, but he also walked me through shoeing Rosemary. He is great at helping me and I was surprised how much I remembered. It is a little scary to think that she is my responsibility now. He basically checks my fit and places the first two nails. I think I am getting an anvil in the future. Then once he left, I still had to finish Dottie and DaVinci. It definitely took my mind off the show. 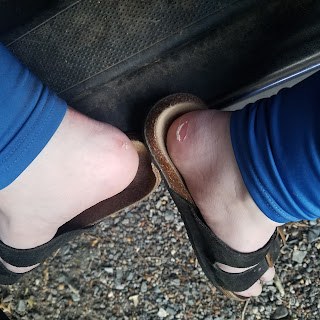 This show prep was a uphill battle:
I was  dealing with open blisters on both heels. Luckily my retired Marine coworker reminded me about mole foam and it saved the day. 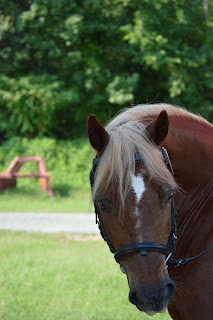 A couple days before, Roscoe had a swollen, warm spot just above his mouth. Fortunately, it seemed to disperse in a day.

Peggy also was cleaning the crazy lint off my pads and girths which nearly had me crying when I pulled them out of the wash Friday night. I will never wash pads with towels again :(

I was so hoping the old saying of "bad before, great at" was going to happen.

We had to start bathing Comrade, who was a mudd ball from the storm the night before. Roscoe would get whatever time was left over to have his chrome cleaned and his mane and tail.  We managed it all and loaded the trailer and feed the horses. I changed and we left for the show on time. Seriously a freaking miracle. 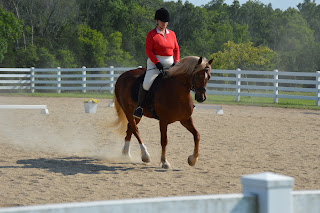 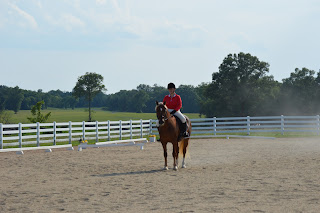 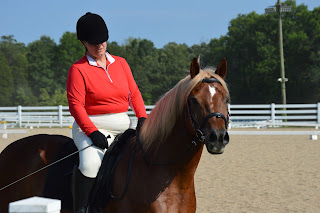 I was determined that this evening show was going to be casual so no braids for them and no coat for me. Plus it was hot. There was a light breeze so we were able to leave the horses on the trailer out of the direct sun. Comrade was up first and I realized I forgot my spurs. He laughed at the whip and I was way too conservative because I was still worried about my heels.
Peggy said some people thought he was Roscoe, who they remembered from the last show. She let them know Roscoe would be out later and that Comrade was the same breed. Comrade got the "Maybe he is a Haflinger" comment until Peggy set the judge straight. All we can figure is that Haflinger is the only type people know since Cobs are not as well known.

Comrade gave a pretty consistent test with a whinny in the middle and a good walk especially for him. This judge was tough on the free walk. My boys felt like they had good swing, but they did not stretch through the neck, so she nailed them both. 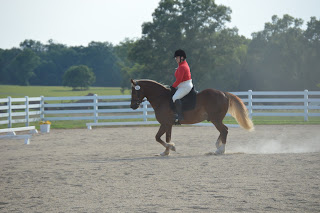 For Comrade's first test in years he was super. Next time I will remember the spurs and I think I will add canter to my warm up to wake him up. The judge's final comment made us all laugh 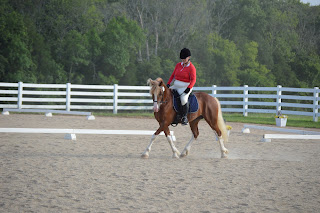 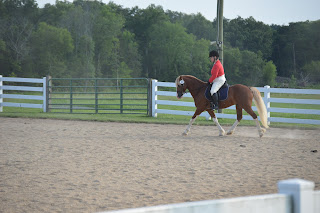 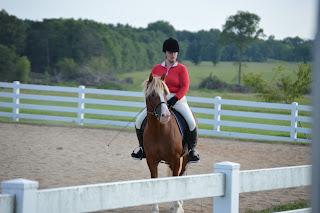 My nerves kicked in for Roscoe. Everything is still a bit an unknown. He was much calmer whether due to Comrade or the fact we were at a facility we had been before. Peggy scolded him when he got pushy during tacking and he was suitably abashed. This time I could mount without Pony Express skills. Immediately I felt better about the show. 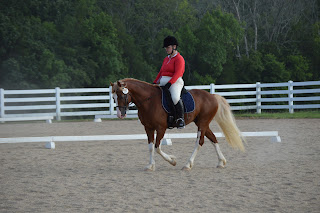 Roscoe had a walk and was less of a tourist. Mom coached me through getting him listening and me breathing. We have a connection and that means we share our stress too. Each show we are figuring out how to work together away from home. With the heat, I only asked for canter once each direction. He felt great and reponsive. Our trot work was still a bit distracted. Roscoe needs a more complicated warm up to keep his attention. I threw shoulder fore and leg yields at him and worked corners and transitions. I told Mom, the test would be icing because my pony in warm up was already a win. 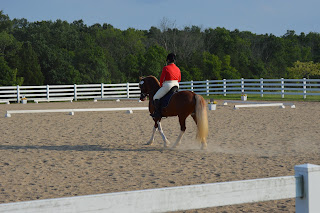 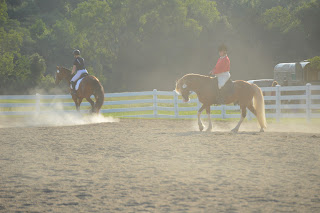 The test began and down centerline was much better. At least until I got tangled and did not drop my rein to salute. Palm to head. 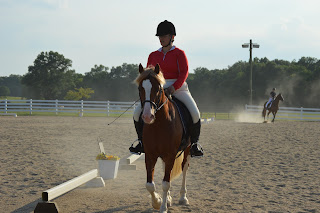 Our trot was good utntil poor Roscoe had a coughing fit. We kept going through it and moved into canter. Which we nailed the transitions, but have to work on finding 20m. 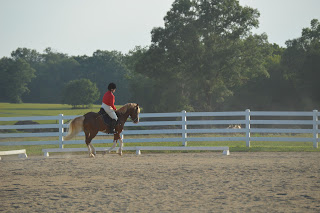 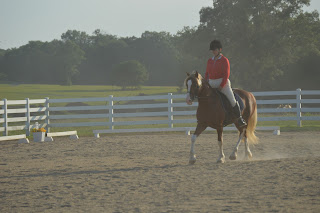 We got tense as we changed to the left and it took me awhile to breathe and relax. The left canter transitions were not as good but I was still thrilled. 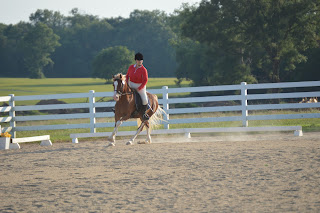 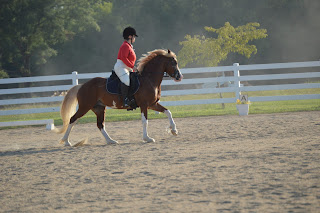 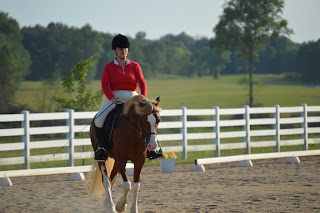 Walk and then the last long trot actually went well. That is a long way down center and Roscoe actually was not drunk. His 9 score reflected that even though he was not square. Overall I was happy and feel better about moving up to Training. 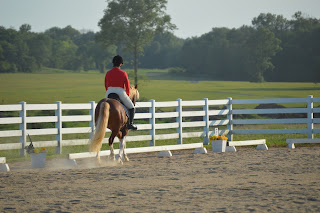 And when it was all done, the boys got matching 3rd place ribbons and nearly matching scores, 71.562 for Comrade and 71 for Roscoe. 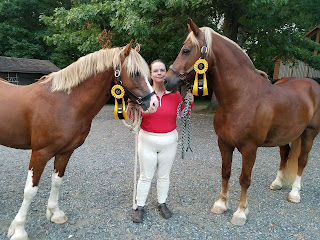 I was questioning my sanity at the beginning, but we all survived. This was my first time riding two horses at the same show. Plus the two tests happened in different size arenas. Next month will be even crazier with a dressage show one day, with a farrier visit the same day and a Welsh show the next day. I think it will be two Cobs to one and another two the the next.
Posted by Nicole at 7:24 PM