Left or Right at A? 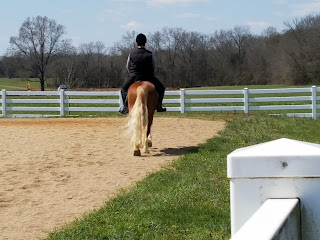 Roscoe started one week jumping and the next going down center line. This show was where my canceled March test rolled over to. I had decided to ride Training 2, so I was surprised when the times came out and showed me riding 1. I emailed to ask the organizer to change the test, but I did not hear back from her. We had some crazy flurries come on Saturday which meant Roscoe had to go with winter whites. I definitely knew I was not putting a white pad on his back that would highlight his not so white socks. Luckily, I managed to find a pad and an outfit so that we looked somewhat put together.
I was actually nervous for the first time in awhile. Mom is in Florida, but Peggy stepped up to help. I think the biggest issue was that I did not know which test I was riding. Would I be going left or right at A? A little thing, but it caused me big problems. My ride time was 1240 and we headed out at 1115. Bless Roscoe, he stayed calm for me tabling his normal pre trailering drama. 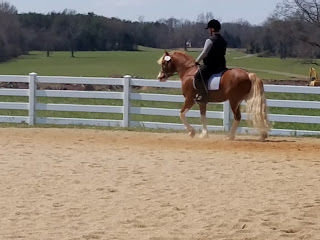 As I walked to get my number I could tell they were running ahead. I asked the organizer which test I was riding and she said 2. Whew, now I could focus on turning left at A. We tacked Roscoe and I mounted. That is the moment that the nerves disperse. Sitting on him is comforting. 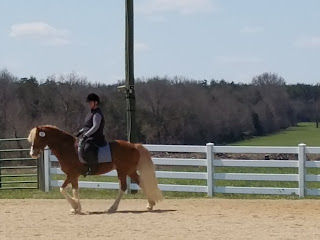 He was full of it, the cool weather and the wind making his tourist side come out. It also brought out that dang popping shoulder. Warm up was rough, but not the same as over the winter. He was not a pogo stick powered by dynamite. He was manageable, but bending was not 100%. Plus he was a bit of a giraffe. 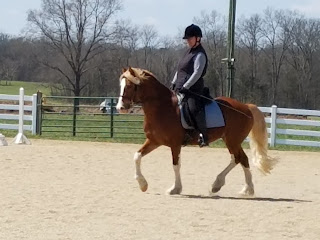 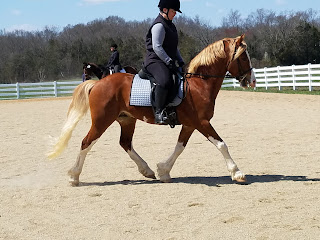 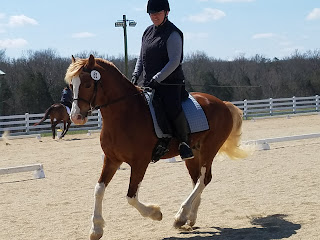 He did eventually give me a nice trot with breathy, rhythmic huffs. Just in time to head into the arena. Roscoe is always a bit up as we circle the arena. He had to look at the letters and flowers, but he settled. We got our highest entry score ever, a 9. Which is a miracle since they put A right in the entrance so you had to wiggle to get straight. He continued to do well with his trot circle and diagonal. We got a slightly lower score for canter because Roscoe has been popping up in the transition. I was not surprised that our stretchy circle was not as good as at home. He did give me more than I thought he would. Then it was a medium walk into a free walk. Roscoe jigged a bit as I opened up for the free walk. I guess I need to rein it in next time. Left trot was tougher because he was not in the outside rein. This has been an issue as long as I have ridden him. It is definitely worse when he is distracted. As we changed rein to Roscoe popped up at H anticipating the coming canter depart. The depart was better, but his circle was bad. He was popping his shoulder and dragging us outward. We finished well and I was so happy.

It was by no means our best test, but it was certainly better than I expected for the first test of the year. The judge said to work on his abs. I laughed inside thinking about the pony who jumped the previous week.  Peggy went to get my score sheet and ribbon while I finished packing up. 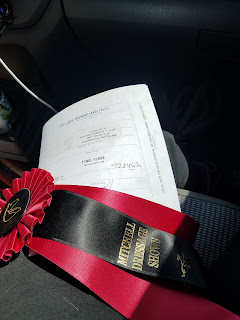 I was surprised to see a  red ribbon. She asked me what I thought my percentage was. I said 63 based on how I felt the ride went. She laughed and showed me my 73.85 score. Our collective scores were higher, showing that our winter work paid off. The judge saw the things I felt, but she was nicer scoring than I was. When I watched the video, it looked better than it felt. I was happy that my position did not fail as bad as it has in the past under show stress. Now I just need to work on that dang outside rein.