I wanted to ride Roscoe, but he was already out in his night turn out. So I thought about riding him out there, but Ember was around and I had visions of him jumping on us. Well I solved the issue by deciding to pony Ember. 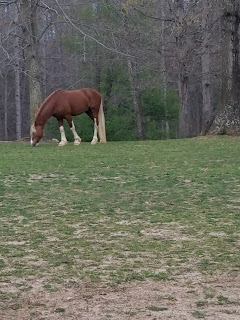 My mom was there and worked Ember on the line while I warmed up Roscoe. Roscoe decided that working in his turn out meant he could be lazy. I walked up to a tree and broke a branch off to be my whip. That was enough visual to get him working. Then the fun part came when mom brought Ember over.


Ember wanted to suck back so he could bite or jump on Roscoe. Roscoe wanted to stop and put Ember in his place. I had to keep Ember up by my leg and tell Roscoe to let me do the managing. Roscoe still was sticky especially when Ember bumped against us. Eventually, they worked out the walk.


Trot was another learning curve. Roscoe would not trot, but Ember would. Then Roscoe would and Ember would not. I had to pick up another stick to encourage Roscoe. Finally, they both trotted. We had to walk for downhills since Ember could not balance. Ember is so big that he would outpace Roscoe at times. Our baby is bigger than dad now.


Afterward, I let Roscoe move around without Ember. I think he was not happy his time was shared. Plus this was the first time he was on the other side of ponying. The last time he was ponied by DaVinci who he tried to jump on. Like father, like son.
They shared a haybag later, so I guess it was not to terrible to work together. Ember did enact all the evil thoughts I blocked during the ride on Roscoe when they were free. Luckily Roscoe is totally used to it by now. 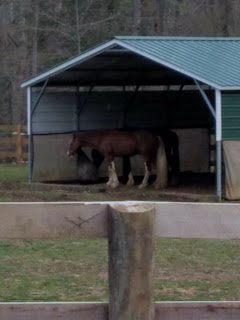