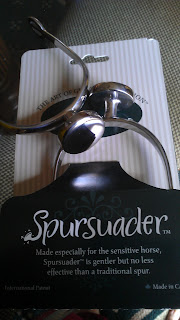 Over the weekend I rode Comrade twice and DaVinci and Rosemary once with these spurs. None of them had a negative reaction and they responded really well.
For me the spurs seemed so big compared to the micro spurs I have used previously, but they actually were easy to engage. The nice rounded edges and wide surface made a gentle but firm contact with the horse.
With Comrade, who you all know is not shy about bucking, it was amazing. He did not take offense when I used the spurs and actually had a bend through his rib cage. That bend released the tension in his neck creating the nice floppy top line. I was also able to work on his lazy right hind leg when asked to step under and push. He likes to shuffle sideways instead of crossing. With help from the spurs he did achieve the cross over, though it still needs work.
With Rosemary, my drama queen, I got a little swishy tail action, but that is normal whenever you tell her what to do. I did get a much better bend through her body, which we have been working on.  I can't wait to see Mom use the spurs while working her.
With DaVinci, I had fun. He is our lateral king, but I am not so good. With the spurs, my timing was working and DaVinci gave me some awesome half passes. Then I turned my foot out so the flat side contacted his side, not something I would normally do, but he was fine with the pressure. And by keeping the correct bend our lateral work was much better than I normally achieve.

So overall, I have been persuaded. I know that was bad.
Three different horses at different levels of training and all had positive reactions and better work. They sell for about $55. I do not know what other spurs go for, but these are worth the price. And for those of you who ride western, they have a western version.
Posted by Nicole at 10:48 PM