IT'S BACK, Bigger and Badder

All year we have been dealing with a growth on Rosemary's eye lid. After a biopsy determined it was a sarcoid, we having been consulting with our holistic vet, Joyce Harman to treat her with various remedies. So far none have made a definitive difference. Unfortunately the sarcoid is huge now and surgery is almost inevitable. 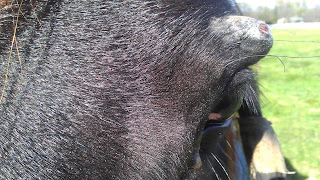 Our last hope of a noninvasive solution is a Chinese remedy. It is pricey, but cheaper than surgery. 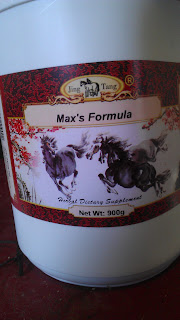 Rosemary will get 3 tablespoons of this twice a day. I would tell you what is in it if I could read Chinese. I can tell you it is very aromatic. In addition to this formula, she will get a teaspoon of Chrysanthemum. It serves a supportive role. 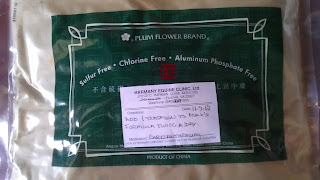 Now the only problem is getting her to eat. The first meal, no problem. Then for her second dose we soaked some alfalfa cubes to mix it in and so we could share some with Dottie. Our horses only get one meal a day, so this is a treat. Well Rosemary decided she was not hungry enough to overlook the taste. Mom and I ended up mixing the remedy in a dosing syringe and shooting in her mouth. The cube mix went in the fridge to try again.
Today I put the cube mix in her stall and she grudgingly ate about 95%. She did not eat it well enough to try again for her second dose. Unlike like mom, I did not get the remedy mixed perfectly in the syringe. First attempt, I lost most of it when I though the plunger was in far enough and turned it over :{ Second  and third attempt, the mix clogged at the end of the syringe. Fourth attempt, I used my fingers to push the clogged bit into her mouth. After all that I had a small amount left that I rubbed into a sweet feed treat and finally she had gotten the whole dose. Whew, there has to be an easier way.
I think tomorrow I am going to mix the remedy with water before putting it in the syringe. If all else fails, I guess we could buy sweet feed, which we normally avoid, and hope that is enough to get her to eat the remedy. Oh the lengths we go to for our horses.

And for those of you interested in how Comrade's brother did at the Royal Winter Fair, he placed second to his travel mate, a 12yr old Sec C stallion. He did really well in the crowded barn and around all the people. Pretty great for his first show. Here are a couple pictures his breeder sent to me: 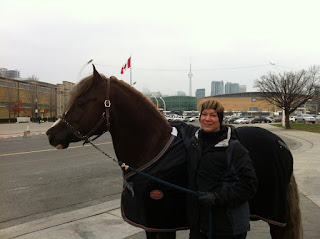 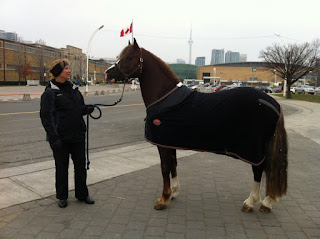