My crazy early day was totally worth it. Not too hot, no rain and an awesome pony. Warm up brought a chatty distracted cob. Slowly using bending lines I got him to focus. I kept it light, so he would have energy for the test.
Ah, the dressage test. I really wanted good transitions, accuracy and no bucking. Goal achieved. My nerves played there part causing some tension in both of us. Our biggest mistake was that Comrade started cross cantering during our right lead circle. I should have transitioned down, but did not so we took a hit for that one. His free walk is a weak point, but he did better. Overall the judge said he was obedient and consistent. We have to work on suppleness and relaxation. I am really glad I went with the BN-A test. We were ready. No pictures, but here is a video of the ride:
At this show they gave a window of time for stadium to be completed within. I went towards the end of the time after letting him go over the warm up jump a few times. Now back when I evented Barry I always had a bad case of "first jumpitis." It normally cropped up during cross country. Well this time it happened in stadium. Comrade stopped at the first jump. I decided he could jump from a standstill rather than circling around. He jumped, bucked and proceeded to wiggle and stop at the second jump. Again I made him jump from a stand still. After that he looked but did not stop. During the final combination, I let him canter the line. Unfortunately, the second jump did not have a flower box below the X so Comrade went over lazy pulling a rail. He finished well and I was totally happy. At that point I figured we had 1 or 2 refusals and a rail. Considering it is only his second course, I was okay with the results. I was able to have fun with this course. It was great to do this kind of jumping again. Here is the video (a little rough):
Afterwards, Peggy hopped on for the walk back and worked him a bit in the warm up ring. He was a super star taking care of her. The day started to heat up. When we realized the scores would take awhile, we decided to bring the pony home. We would return later for scores.
I fully expected to be going to get my dressage sheet and nothing else. Well we were surprised to see the listing when we arrived. 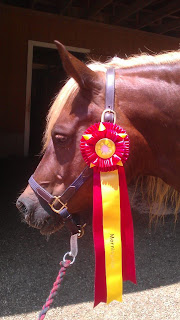 We got second place!!!
If we did not pull the rail we would have won on our dressage score, 37.5%. The rail tied us for first and we lost by one collective mark in the tie breaker. Since I was not expecting such a great result, it was like icing on the cake. I am really glad I did not know we were leading before stadium as it would have raised my nerves.
After all the rough shows over the last couple years, this show will go a long way strengthening our partnership.
Now it is time to crash. 330am was a long time ago.
Posted by Nicole at 10:58 PM