It has been a slow day for me, so I am just going to talk about some random stuff.

First, Thanks to everyone for your comments about the CT. Some of you know the struggles Comrade and I have had during shows especially at the canter. I am still jumping up and down, mentally, over our achievement. For those who thought I did not look too tense, this would be what helped me that day: 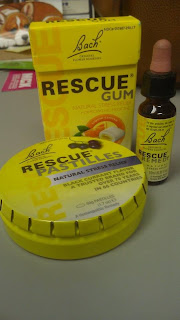 Rescue Remedy products are the best for managing nerves. They also make an alcohol free version that can be used for animals. I took the Pastilles every couple hours or so before warm up, then I chewed a piece of gum while riding. That gave me the remedy and kept me from clenching my jaw. I have used this stuff for years now and it has helped me through final exams, shows and stressful times like Winston's laminitis. Now they do not score high on flavor, but the results are worth the taste.
Tomorrow Comrade and Peggy will go to their first lesson with an eventer Peggy met a few years ago. She is ready to ride and this instructor will help her push past the limits caused by her fall. I wish I could go watch, but I have to work. She is considering having this instructor ride Comrade and work him cross country. It will do him a great service. I know that, but part of me wishes to do those firsts with Comrade myself. Aw well I will just have to wait for Roscoe to grow up.

Second, Roscoe always amazes us with how quick he picks up training. The other day, Mom was scratching his withers. He was making funny faces and lifting his head. While that is cute, it does cause him to hollow his back. Not good for future riding. So Mom asked him to put his head down. When he complied, she would scratch his itchy spot. If he lifted his head beyond normal resting height, she stopped. She again asked for his head to go down before scratching. It did not take long before he was putting his head down while being scratched. When she stopped, he would immediately lower his head. And the next day when I scratched him he remembered right away correcting his head position. Positive reinforcement is always a great training tool.

Third, We had a new cat wonder to the barn a couple weeks ago. He must be a drop off, darn people, because he is friendly. Out of the blue Jenna's owner decided to take him in to get neutered and for shots. She calls him Freddy, but we call him Ray so I guess his name will be Freddy Ray. He likes to follow our long hair yellow cat Bailey around, much to his dismay. But when Ray was locked in the other tack room for a bit, Bailey laid right outside the door keeping him company. So here is Freddy Ray, with the awesome copper eyes:
Fourth, Remember Swayze? Well he has not improved since that last ride I wrote about. His owner had the vet out to get him tested for Lyme's disease. He had a sore back and underside of his neck which can be signs. Today the results came back negative. She has basically decided to sell him thinking she does not have the time, she is a nurse, to work him as he needs. After two years, she has not made the progress she would have liked. It is sad, but only she can say whether it will work or not. I offered to work with him on weekends, even if just to make him a better sale. So we will see how this goes along. If you know anyone who would like a 17h+ TB who is a sweetheart, but needs rehab work, let me know. 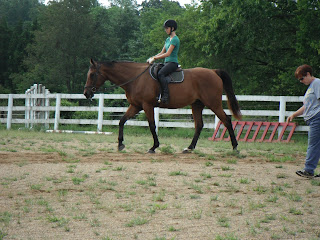 Finally, Rosemary's eye has been really looking good. It got to a point not long  after the piece fell off, where it began to recede inwards. The size has decreased and the area is looking really good. She has another sarcoid on the opposite cheek that is decreasing too, but she rubs that one raw sometimes. Plus I think the medicine is making her photosensitive as her face looks a bit poc marked. We have started putting sunscreen on her, which seems to have helped. So at just about 9 1/2 months of treatment, here is what her eye looks like: 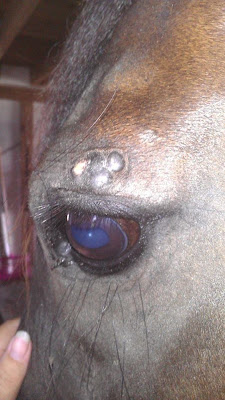 The little white spot is where it used to be opened. Below you can see it has a much slimmer profile. Her whole face looks better now that the big hairless area is gone.
﻿
Posted by Nicole at 7:40 PM