A Visit From the Past

7 years ago, a friend and old student of my Mom's asked if we would be interested in taking her horse since she was headed to college. Knowing the training he received during the years he was with her, we said yes. This was around the time that we knew Barry would have to be retired, so another rideable horse would benefit us. She did consider sending him to Findlay College, but at his age (17) that kind of environment would be tough. We told her he would stay with us till the end and he would get more attention than at the college. In the end, she shipped him from CA to arrive to our barn at 230am. From that day forward, DaVinci became an integral part of our herd and took a large part of our hearts.

Over the years I have shared pictures with his previous owner to keep her in the loop. He had some issues that we have worked through, both in the saddle and on the ground. Slowly we saw him change from the uptight, worried pony into a more laid back version. So, when his owner contacted us about visiting, we were torn, but said it was okay. Horses have very long memories. Sherman would not take an apple from his previous owner, even after years of us owning him. We wondered if DaVinci would revert to past behaviours or not.
We waited until the morning of the day they were to visit before Mom told him about the visit. She made sure to tell him that he was not going anywhere. DaVinci showed Mom a picture of HJ (owner) hugging and talking to him in a stall. And yes this was mentally. Mom has an awesome ability to "talk" to the animals. Nothing flashy, but it is there. My grandmother says it runs in the family. Anyway we felt better about the visit knowing he had a good memory about HJ.
HJ and her Mom arrived and we waited to see his reaction. He remembered them and promptly started begging for treats. He pleased HJ by doing some of the tricks she taught him. Mom and I breathed easier after they said they were happy with how he looked. Then came the real test of how far DaVinci has come: a ride.
It went much better than I expected. HJ, who has not been riding recently, tried not to ride too heavy handed and ended up with too long of reins and her hands in her lap. But with all that, DaVinci stayed quiet. He totally took advantage of her by going about lazy and on his forehand. Mom eventually started to talk her through packaging him with out HJ reverting to bad habits. 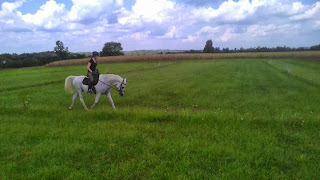 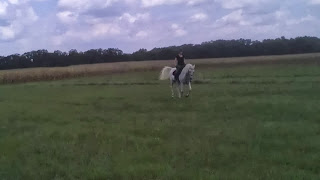 After playing with DaVinci we let her ride Rosemary and then Mom took them both for a drive. Overall the day went well. It is a little bittersweet when you think about that at 25yrs old, this was probably the last time HJ will see DaVinci. I am glad for both that the visit was a happy one.

Days after we were thinking DaVinci was looking really settled. It was as if seeing them again and not having to leave reassured him he was home for good. He had one moment when he stressed. When we pulled the trailer up to the barn to bring the Cobs to Peggy's for the show, he totally paced in his stall. I told him he was not going anywhere. Then I let him run outside to the sacrifice area. He ran, rolled and flipped his tail. That boy said he was not going. So seeing his old owners, OK. Seeing a trailer after seeing his old owners, NOT GOOD.
Fortunately he did not hold onto the stress. We think he looks the most relaxed he has ever looked. Even our vet was impressed with his changes. She has seen him at his worst when he was injured and at rest, so for her to recognize his new relaxation says a lot.
This visit from the past took the last shred of worry out of DaVinci's mind and let his old owners know he is doing well. We could not have asked for more.