Comrade was completely full of it today. I asked Mom to set up a gymnastic to get him focused and working. The exercise evolved and changed every time we went through. What amazed me was that he never balked at the mass of wood and PVC poles with jumps in between. He got right to work figuring out how to handle the challenge ahead. 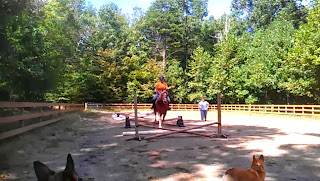 At the start it was five jumps at the middle height of cavaletti, first three with 1 stride in between and the last two had 2 strides and poles set at trot pole widths.

As we went through my Mom either rolled ground poles in or out and raised a jump at a time. Even when settings were not perfect, Comrade was handy enough to get himself through. I just got off his back and used my shoulders to half halt when needed.

By the end, all the jumps were set to the higher cavaletti setting and almost all the poles were set to ground lines.


All during the passes, I felt him drift to the right. I could not understand why I could not keep him straight, until towards the end I looked back down the line and realized the first jump was set almost a foot more to the right of all the others. Geez, I cannot believe none of us noticed that. Goes to show how well Comrade adapted. We are also dealing with a slipping saddle again, since he has lost so much weight. Bobby said he is looking really fit. Coming from a three star eventer, that is a compliment. He thinks Comrade needs more weight. I would not go that far. He still has a crest and some around his tail head. I like his energy level now, so maintaining where he is at would work for me. 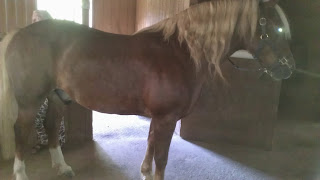