Thumbs UP for Winston!!!

After four months, it was time for a check up for Winston. He has been looking great, but we wanted our vet's opinion. So Mom sprung the visit on me and the morning of I ended up trimming his feet before going to work. Winston had grown more foot than he ever has before. No way was I going to  let the vet see his feet looking so long.
I called Mom later to see what the vet thought. She felt he looked great though he could lose a little more weight to be safe. Once the grass goes dormant he could even graze with a normal muzzle. When we showed her our modified muzzle, she said he must not get much. She watched him on the lunge and cleared him to start work under saddle. He will be so happy to start working again. A total thumbs up visit.
She also checked his pulse points and foot temperature. Those, too, were normal. The biggest reminder of his episode is the event lines on all four feet. Hooves do not lie and can tell so much about what happens in a year.
The scary part, Comrade has the same event lines on all four feet. According to the vet, he definitely had and episode. I think we caught him faster because Winston's situation made me react strongly to Comrade's increased weight. In hind sight, Comrade was a little foot sore around that time. I remember talking to Peggy about him mincing across the gravel. Winston showed the same kind of soreness in the weeks before his full blown laminitis hit. These signs will be like neon lights in the future for us all.
While the vet was there, we had her pull Coggins. As she looked at each horse she commented on their overall body condition. Dottie and DaVinci: Looks great, especially for their ages. Rosemary: Still needs to lose weight. She thought this was due to lack of work, but Mom told her Rosemary works the most. So Rosemary may join the Hannibal Lecter club with Winston and Comrade. Roscoe: Needs MORE weight. Oh the joys of a boy amidst a growth spurt. We told her after Winston, we don't even let Roscoe graze without a muzzle. He does get extra food though.
Overall a positive visit which resulted in this: 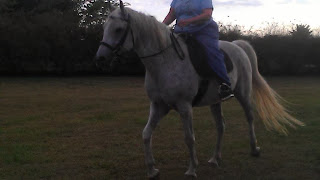 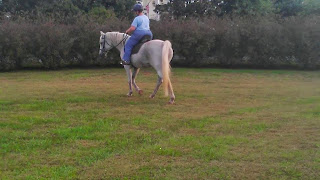 Super happy and CALM pony. Our normal worry wort was so relaxed. I guess absence does make the heart grow fonder :)