Did You Miss Me?

Eek, it has been over a week since I last wrote. And the reason for that, one 6 pound bundle of joy.
Meet Deliah (Deel-Ya) a 12 week old Corgi.

Just before the Welsh Show, Kayla's ashes came home. It seemed to kill Griffyn's last hope she would ever come back. He had a super bad, depressing day afterwards. Then gradually he started to figure out his new circumstances. We could see he was getting better, but he still seemed lonely. Mom and I began the search for a puppy.
We knew we preferred a female, since Griffyn and Shadow get into pissing contests all the time. Color wise we were open. Breed wise, after deep thinking, we stuck with Corgi. Unfortunately, VA Corgi's are so very expensive. I needed cheaper and that meant looking further away. Nothing new for us. Griffyn came from an Amish farm in Lancaster PA. So, when one female puppy was still available at a Mennonite farm in Ritchfield PA, we said yes and planned for a road trip.
Four hours brought us a new little girl. Griffyn ignored her, normal reaction, and she settled right into our family. She handled my niece like a champ, even after being dropped. She is smart and observant in an almost scary way. Griffyn loves to learn new tricks. One of them is ringing a strap of bells to say he needs to go out. We showed it to her ONCE and ever since she will ring the bells. She learned how to seat, somewhat lay down and even some "leave it" commands. 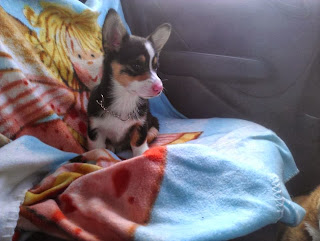 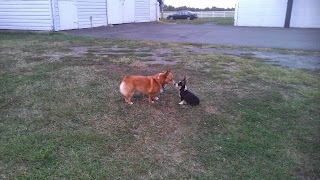 The old saying of "it may not be what you want, but it is what you need" fits Deliah so well. The difference in Griffyn is night and day. Deliah even won over my Dad, who was really broken losing Kayla. Watching her play is enchanting and keeping her out of trouble is time consuming. Hence my lack of posts. 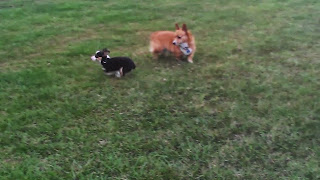 And speaking of trouble, Deliah went on an adventure causing Peggy and I to look for her for almost an hour. We could not believe she had disappeared. I was so close to a break down and minutes away from calling my Dad to say I had lost the puppy. Then I looked up to see a women and two kids walking up the driveway. I held my breath until I saw what she was carrying moved. Whew! We lost one Corgi to a hit and run on that same road so I needed to know she was alive. Turns out she took herself down to their house and lay down like she owned the place. Of course the kids wanted to keep her. Fortunately, the grandmother remembered we had similar dogs and brought her back. Peggy hugged them all and I held on to Deliah. That girls was not wandering again.


The rest of the day she got attached to Griffyn with a baling twine double sided leash Mom made years ago. This way I could count on Griffyn to babysit. Deliah just had to deal with being dragged, literally at times, around by him.