That is what I have been for the last week. In retrospect I totally should have called out of work, but I always felt not too bad going in. So well I was out of commission my poor parents had to shovel a dump truck load of sawdust into the shed, strip stalls and load stalls. This was after a weekend of getting another load of hay, which I was able to help with. But as bad as I was feeling I did see some great things.
Saturday an old friend and student of Mom's came out to our barn with a friend to ride. My head was way to muzzy to get on a horse so Mom rode DaVinci while they rode the girls. As we watched both Mom and I tried to give them pointers. Our friend riding Dottie kept leaning forward following Dotties downward head drop instead of picking her hands up and making Dottie lift her front end. Dottie will not give anything extra without being asked to. She goes into the lesson horse "jog" and takes advantage of any weakness she feels. After telling our friend to keep her shoulders back and her hands up, Dottie started to look better. At one point Mom demonstrated picking up the front end with DaVinci who performed it like a pro. Of course he was in total show off mode.
The other girl rode Rosemary, who showed she was not doing anything if she felt the girl was not ready. She did a deliberate plod as I have only seen her do and would walk if given a chance. I noticed the girl got stuck doing long side, circle, long side and never changed direction. Pony girl was completely bored. She kept going though and never fussed. When Mom finished with our friend, I sent her over to the other girl. With Mom's help she got Rosemary moving in a truer trot and more focused. I love that as green as she is, she still takes care of her rider. The girl could not get her to canter, no surprise, but seemed to enjoy the ride.

Even more than the ride they seemed to crave the instruction. I can respect that especially when they are riding our horses. I think the girls have gained new riders to play on the weekends.

Afterwards Mom worked Roscoe on the line to show off his movement. He was ready to work and listened really well to her commands. Later on when I turned him and DaVinci out they both took off running. I love watching my guys run in the field. Such a joy when I had been feeling so bad. 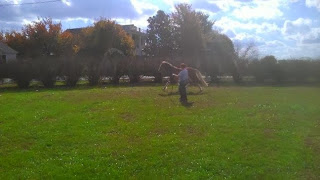 Then on Sunday we went to the National Zoo. So pretty with the trees changing colors and all the animals. I did okay for the first part, but was reminded that I was still sick by the end. Worth it though. So here are a few pictures.